That is called brassiere; she is called daughter of Air force commander; I know not how to lash my son and son in law 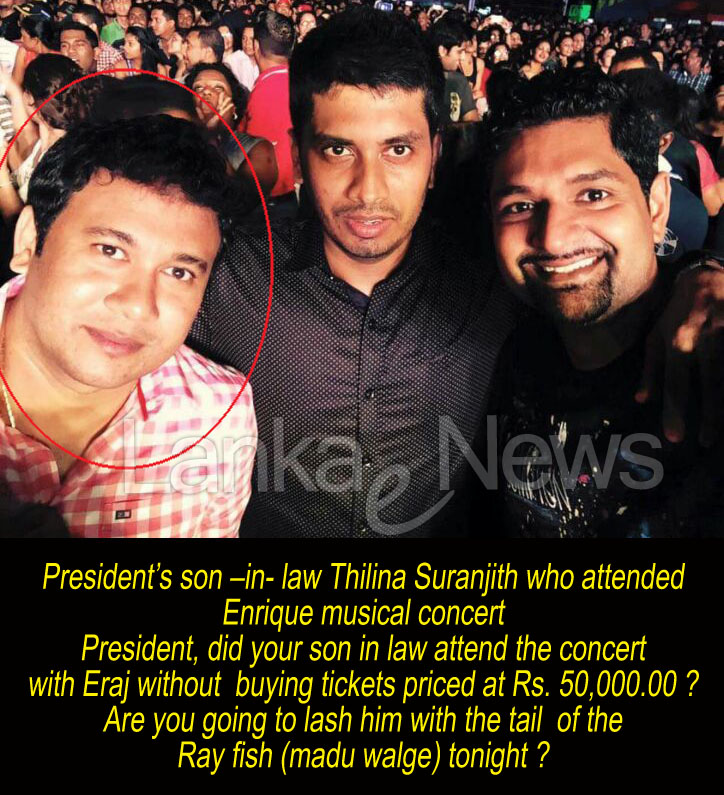 (Lanka-e-News -28.Dec.2015, 3.40PM) It was none other than the daughter of the Sri Lanka Air force commander who darted from the rear stage at the concert in Colombo to kiss and hug Latin Amercian pop singer Enrique Iglatius most passionately and publicly while  he was performing . Believe it or not ,this youngster, Ayendra Bulathsinghala  is not only the daughter of Gagan Bulathsinghala the present Air Force commander whom president Maithripala appointed even  ignoring the monumental opposition mounted by the whole country against that appointment, but is also the prospective daughter in law of a wheeler dealer Wegapitiya the money launderer for the family of Sirisena .

Lanka e news always first with the news and best with the views had the misfortune to expose this disgraceful ugly episode for the first time on the 22nd – the itch at the wrong place  of Sri Lanka’s latest breed of shameless young women  of the so called high society , as well as their uncontrollable sexual lust and inordinate desire to expose  their busts .

After Lanka e news exposed this incident on the 22nd, the hired pro Maithri social media chain  team that is working for love of filthy lucre and was conducting an artificial campaign   against Lanka e News began to wear out and turned into a spent force. The president then realizing that the growing people’s opinion is that of Lanka e news had at last made a public announcement today at remote Amparai, and criticized the conduct of the daughter of the Air force commander who forcibly kissed , hugged and clung on to the singer , as well as that of another young woman who unzipped her brassiere and threw it at the singer to take it for keeps. It is fortunate the president made this announcement at least now without waiting until these itchy women  began throwing out even what are  hidden behind  their  bra too at such concerts, which could prove fatal.

President Maithripala who was copying and imitating the biggest hypocrite and fraud ,the mendacious and Machiavellian  ex president Mahinda Rajapakse  from the very outset  when making  his speeches using ‘Apey Hamadruwane, ’  and  ‘Nayake Hamuduruwane’ most profusely had this to say on this occasion...

''There was a musical concert in Colombo last week, and a foreign singer performed . This singer was on stage for an hour.To enjoy this performer’s concert , ‘Apey Mahanayake hamaduruwane’ tickets were sold at prices ranging from Rs. 5000.00 to Rs. 50,000.00.

After admission  , there were drinks which could be purchased  with the available cash .I cannot say this before the young children in front of me, but I cannot also wait without saying ’ Hamaduruwane.’ You must have seen via the media how they rejoiced  and danced after drinking liquor including Arrack , Beer , Gin and Whisky during the one hour .

These girls  began throwing their  upper garments that cover their  inside better known as   the brassiere at the singer for him to take them. Just imagine , this is how our culture is being preserved. Some girls got on stage with the singer and started kissing him by force.This uncontrollable misconduct was the result of the influence of liquor.

There is a village saying.  When somebody makes a mistake he /she should be given lashes with (Madu walge) Ray’s tail. Mahanayake hamuduruwane , by my telling this ,I am not referring to the young women who threw brassieres or who got on stage and misbehaved , I am referring to  those who organized such shows. They should be lashed.''

The president taking over a week  to make this announcement is perturbing and perplexing, and several issues have sprung up in this regard among the people.. The president is bound to  make an announcement in connection with the following issues..

1. The young woman who kissed , hugged and clung on to Enrique shamelessly and most passionately , and who disgraced the Sinhala culture is not from Amparai . She is the daughter of no less a person than the Air Force Commander . Hence it is the Air Force Commander who should be summoned and warned to teach his  daughter to behave better. Instead going to remote Amaparai and making this announcement before  the innocent people of Amparai serves no purpose.

2. It is the prospective daughter in law of Wegapitiya the money launderer for the president Maithripala’s family , that is, the girl who is betrothed to the son of Wegapitiya , who kissed , hugged and clung on to Enrique in a fit of delirious sex starvation . Hence , why go to Amparai and make sermons  as though the innocent people of Amparai are responsible, instead of summoning  Wegapitiya and advising him to teach his daughter in law  good moral values?

4. The statement made by Executive President Maithripala that those who organized the show should be whipped can be reckoned as an absolute threat and fear inspiring. Doesn’t he know that this show was organized by Light events private Co. belonging to Kumara Sangakkara and Mahela Jayawardena ? That means the president is today going to tan the hide of Kumara Sangakkara to whom the post of SL High commissioner to UK was offered almost by force by the president after dashing to the playground like a school boy ? and Mahela Jayawardena ? Is he trying to lash Sangakkara and Mahela because he cannot lash Daham and Thilina?

5. Since when was the requirement  introduced in ths country that the Executive president’s recommendation is necessary for holding musical shows ?

6. Shouldn’t the snake charmer understand he can only make the snakes he has taken  under his attire dance to his tune and not the snakes  that are in the country ?

7. Instead of making characteristic foolish bombastic utterances like lashing others with the Ray’s tail , won’t it be enough to give a sane and sensible warning to the youngsters that when enjoying their freedom and  engaging in pleasurable activities they should exercise restraint ?

I believe this story is blown out of proportion. We know that there was a bra thrown at Enrique, but do we know who throw this bra at Enrique? It says, it was a woman threw the bar. Is there any proof on this? It could be a man who throw the bra at Enrique and tried to provoke the audience and the media knowing Sri Lanka's culture. In any case, in any culture, this kind of behavior is still not acceptable. I remember that Janet Jackson (Michal's Jackson Sister) did similar thing during the Super Bowl (2010), She and TV station apologized to the audience. If I am correct, FCC fined CBS a $550,000. I do not blame the President, probably he was misinformed about the incident. But the President is correct when he says, he cannot allow people to walk naked in the street because no society is still wants to go back to primitive stage of human civilization. When Societies decide to go back to primitive stage (people wearing no cloth) with advance mindsets, no one dear Len, Find the person who throw the bra at Enrique
-- by Pat on 2015-12-30

Why are you guys bringing in there parents into this, a young girl kissed a star she idealise and it means nothing,, please don't fall into such a low level when you write and dont charachter assasinate people,,, wise men have said "watch out don't fall into grave that yr digging for others" have some respect and ethics and responsibility when you write about others,,
-- by Vasantha on 2015-12-31