Yoshitha Rajapakse, Nishantha Ranatunge, Rohan Welivita of CSN are the record breaking culprits in SL’s biggest ever fraud investigation ! Why they were put behind bars? 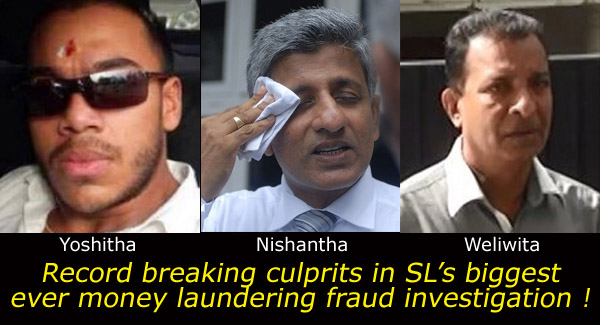 (Lanka-e-News -31.Jan.2016, 1.25PM) It is very unfortunate  the unscrupulous media coolies of Sri Lanka in keeping with their sordid traits   tried to paint a picture that the arrest and remanding of the five high ranking officers of the CSN channel including Yoshitha Rajapakse (son of Mahinda Rajapakse) ,Nishantha Ranatunge (younger brother of Arjuna Ranatunge ) and Rohan Welivita are the consequence of political vendetta .

One of those stinking media coolies who was there without bathing  holding the mike for Mahinda Rajapakse did not have the guts to question ‘Didn’t your son go  to jail because of daylight robbery of public funds?’ and ‘why did you allow your son to rob and you remained an idle spectator ?’ . The stinking media coolies were also  unable to ask from Arjuna who parades as a paragon of virtue criticising all and sundry pointing out  the frauds of all others across the country while his brothers were most corrupt ,why Arjuna could not notice the robberies  of his own  younger brother committed under his very nose? and, is it because his eyes were blurred by the  exudation from his  eyes due to eye gland infection?

These unscrupulous media coolies who would sell even their souls for a mess of potage notwithstanding , let us emphatically state  , it is the responsibility  of the true media to expose the truth pertaining to the criminal incriminations of these culprits , Yoshitha Rajapakse , Nishantha Ranatunge, Rohan Welivita, J.T.S Fernando and Kaveeshan Dissanayake of the CSN , and why they had to be put behind bars.

According to reports reaching Lanka e news , this investigation launched into the frauds at the CSN channel is the biggest ever in Sri Lanka ‘s history. The magnitude of the fraud is so huge , it is still not fully unravelled  , but based on information surfacing  so far , it is in the region of about Rs. 520 million ! though the actual figures are still being probed. This fraud is so extraordinary and astounding , because of the scheming modalities adopted  much more  than the amount of money involved.

In any Establishment when there is a fraud , it is only a section of that establishment or  some group that is involved, but in the CSN , the entire establishment had been involved with the participation and collusion of all in general. In other words this Institution has been  established with the sole primary aim and objective to commit frauds. From the very beginning –that is ,from the time of registration  including the auditing and audit reports, the operations have been  fraudulent .

The CSN does not have a permanent chairman. This is because its chief is Yoshitha  Rajapakse and being an officer in  the Navy he cannot legally hold that post in a private establishment .Therefore that aspect was kept hidden. Though Yoshitha was not the chairman overtly , he had signed all important documents. Hence , those actions of his alone are enough to dismiss him from the Navy.When any Institution is launched , an initial outlay is necessary. How is it provided and by whom ? must be clearly made known .

However pertaining to CSN , although a sum Rs. 90 million is its initial outlay, it is not mentoned  who invested that Rs. 90 million or from which source it came. The worst part ? though the chiefs of the CSN were interrogated for the last several months in this regard , none could give an answer.That means this amount of Rs. 90 million is ‘black’ money out and out .The next question is , to whom does this money belong?

In addition , a further sum of Rs. 169 million had been remitted to this company from Singapore.Even the remitter of this sum is not recorded anywhere .The details and documents furnished in Singapore in this connection are  also spurious, and nobody knows who remitted. Interrogation for two months  was unavailing as none of the culprits were giving answers during the interrogations.

These ‘black’ monies have come to this Co. not from Singapore alone. From these transactions it is clear CSN was utilized for the money laundering activities of Rajapakses.

Money laundering is a most grave and heinous offence under the law. Those incriminated  in money laundering cannot be ganted bail by the Magistrate court , as the latter has no powers to grant bail. Bail can be sought only through the high court .  Therefore after Yoshitha and group were produced before the Kaduwala Magistrate court yesterday (30) they were remanded until the 11 th of February .

We have in our aforenoted report only revealed just a part of the massive fraud at the CSN based on what have been hitherto uncovered . A detailed report of the colossal misuse of state property and funds will be brought to you shortly.

By a special Lanka e news reporter
Translated by Jeff

Money laundering is a serious crime, and more so if it involves even 1US$. Let the newly independent judiciary in Sri Lanka handle this for the moment. In any case, if the US 2.3 million was an irregular transaction, the US itself will issue an arrest warrant for all these people, as the US did to all the big shot FIFA people, where even the Swiss Government caved in, along with their vaunted banking secrecy, and arrested the FIFA people on Swiss soil. All US Dollars are fundamentally US Property and a transaction of even 1US$ through any bank anywhere in the world has to occur through New York. The moment that illegal dollar passes through New York, the sender and recipient have committed a crime against the US, and the US will get you even if it takes a couple of years. That's how they got the FIFA people and that's how they will get anyone, whether they be -ex-Presidents or their offspring. Boycotting state functions or having a hoo haa at Galle Face Green won't turn the tide now that the US bloodhounds are on the track: All their investigators came to Sri Lanka to collect evidence on all the MR Regime's illegal US$ transactions. The FBI Director James Comey explained (the FIFA 'right to arrest' thus) , “If you touch our shores with your corrupt enterprise, whether that’s through meetings or USING OUR WORLD-CLASS FINANCIAL SYSTEM, you will be held accountable.”
-- by Kevin on 2016-02-02