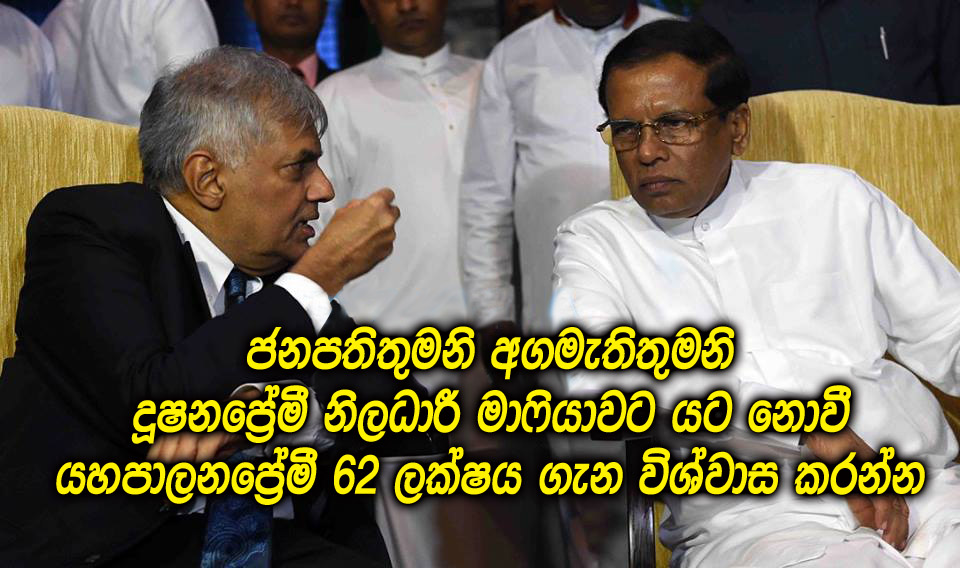 (Lanka-e-News -14.June.2016, 7.45PM) An organization of State officers riddled with corruption including  ministry secretaries has been secretly launched to oppose the enforcement of laws against the State officers who were steeped  in corruption during the ‘nefarious decade,’  based on confirmed reports reaching Lanka e news inside information division.  This organization through the president and the Prime Minister (P.M.)  has already successfully  obstructed the arrest of culprits based on  investigations findings of the CID , and FCID , as well as  recommendations of the Attorney General (AG)

The grounds cited in defense to the president and P.M. by these corruption riddled high rung State administrative officers is : these culprits were involved in the crimes because they had to follow  instructions issued by the ministers in charge, and therefore enforcing the laws against them is unfair. At the same time ,if punishment is meted out to the ministerial secretaries , the entire State administrative service would collapse because in the future the officers will not implement the  decisions of the government .

The  answer given by the P.M. with the approval of the president to the question posed by Anura Kumara Dissanayake in parliament recently confirmed this.

The president and P.M. who swallowed this rotten bait of these corrupt scoundrels had unheeding the two election  manifestos and forgetting good governance for which the  people  elected them , have instructed the relevant officials not to arrest any corrupt officer. This no doubt is tantamount to  exertion of political pressure against the laws and justice in the country. This is obviously not good governance - not even a semblance of it.

Consequent upon this directive , the officers with a backbone engaged in investigations in the security divisions have to endure the evil challenges posed by the corrupt riddled officers , and are in a deep quandary .

In many of the corruptions and frauds committed  during the ‘Nefarious decade,’ it is secretaries of ministries who have been named as the prime suspects . Without these scoundrels who posed as secretaries, corruption and frauds could not have been committed by the politicians during the Rajapakse regime. It is these corrupt officers in the ministries  involved mainly in  furnishing accounts  , and as chiefs of tender boards who have  connived at and approved most of the fraudulent activities of the politicians.

Hence , investigations cannot be pursued against the culprits leaving out these corrupt officers. If they continue , the police officers may have to get implicated in cases  based on human rights and many other grave issues which can be detrimental to their career  and even their lives.

It is under the president , many of the high ranking crooked  administrative officers who were under the Rajapakse corrupt regime received appointments as ministerial secretaries though it is less under the P.M.  Hence , the president is most inclined to yield to the pressures of those  corruption  riddled  scoundrels .

No matter what Lanka e news first with the news and best with the views , which always champions the cause of the people fearlessly  , frankly and forthrightly  come what may , deems it is its  responsibility as a pro Good governance media website to reveal those ministerial secretaries and  former secretaries involved in massive frauds , yet are safe and secure under the protection of good governance government . Their names are hereunder …

Secretary to ministry of law and order – Jagath Jayaweera
He is facing charges of releasing 08 kilos of gold seized by the Customs to the Navy unlawfully when he was the Director General of Customs on the orders of Gotabaya Rajapakse . Investigations are under way .

Secretary to ministry of Agriculture – Wjeratne
He is facing charges following an audit inquiry into a suspicious transaction  when taking a building on rent.

Secretary to the ministry of resettlement – Sivagnanosothy
He is facing charges of a fraudulent deal in violation of  tender procedure when taking a building on rent.

Former secretary to ministry of sports – Nanda Mallawarachi
He is facing charges of importing carom boards and distributing them in connection with Mahindananda Aluthgamage’s election campaign.( The political authority had stated ,  taking Aluthgamage into custody without taking Mallawarachi is no issue. Accordingly , the investigation has been concluded , yet  arresting the accused and filing cases have been stalled.)

Former secretary to ministry of Finance – P.B. Jayasundara
He faces charges of paying Rs. 3012 million to a Chinese construction Co. whereas only Rs. 40 million was approved towards the Gingana and Nilwala ganga project; non commencement of the  project; and failure to collect back the money released.

Present secretary to Finance ministry – Samaratunge
Failure to recover the monies so far  under the same charges aforementioned ..

Secretary to Public Service Commission – Gamini Seneviratne
The Commission inquiring into allegations of Bribery and Corruption is investigating a fraud and corruption committed by him when he was the district Secretary , Kandy.

Former presidential secretary Lalith Weeratunge
Involved in the Rs. 600 million Sil cloth fraud (investigation under way)
Supply of vehicles and fuel unlawfully to Wimal Weerawansa and his party engendering a colossal loss of many millions of rupees to the government . Arrests and filing cases have been halted.

Former defense secretary Gotabaya Rajapakse
Misuse of State funds amounting to Rs.67 million under the name of Weeraketiya project to reclaim a land and organize the   construction of  a mausoleum  and a park in memory of his parents. Out of that amount Rs. 27 million was returned after pleading guilty.

May we point out the foregoing are only what have come to light so far . There are many more  such perfidious and treacherous activities still suppressed  and not unearthed yet . Whither SL ?

In the circumstances we urge the president and P.M. not to play into the hands of the mafia of the State officers , instead  please focus on the 6.2 million pro good governance masses and take a decision directly based on their  hopes and aspirations . This abject surrender could not only undermine the state administration of honesty and integrity  the good governance is striving to install , and the masses are earnestly anticipating.

( In this list we have published, there are three officers known to Lanka e news. But , as we are acting in the best interests of the people and the country , personal connections and friendships have been subordinated in the larger interests of the nation, so  it is  hoped they would bear with us)

5 discussion on this news

The Rajapaksa period has shown a rapid and serious decline in all human values. The public service was corrupted by him, his family and stooges. Law and order situation had been trampled down to the lowest depths. It is very difficult to elevate the public service to its pristine glory now. The Secretaries and other officers should have got the orders of the fraudulent ministers in writing to protect themselves. By not doing so and backing the ministers who had been giving illegal verbal orders then without protest they too have committed a grave crime. There is no reason why they should be spared of punishment.
-- by Peter on 2016-06-14

Let us talk about the fraud activity took place at the central bank under Good Governance and the corrupt ministers like Rajitha Senarathne and others. It is sad PM still wants to keep the greatest thief in the history of Sri Lanka as the Head of Central Bank. How much Dollars really change hands prior to the election amongst the group who congregated in Singapore just before the January 2015 election and what is the role of PM and Arjuana Mahendran?
-- by Nandagupta on 2016-06-14

This defence, "I was only following orders" is known as the Nuremberg Defence because that was the defence put forward by Nazi war criminals who were tried at Nuremberg after World War II. However, this defence was not accepted by the tribunals and most of those who were brought to trial were imprisoned or executed. This defence has also been used in other trials later in many countries, but in all these cases, this defence has been rejected. The threat made by ministry secretaries that they will not carry out the instructions of the government because they could be charged by future governments is absolute nonsense. No one can be found fault with for carrying out legitimate orders of a legitimate government. The problem that the President and the PM are having may be because some ministers of the present government are also getting these senior officers to do irregular things. Otherwise, they can bluntly tell them, "we are giving you only legal and legitimate orders so you need not have any fear to carry them out." If they refuse to carry out legitimate orders, they can be sacked for insubordination.
-- by Kingsley Wijesinhe on 2016-06-15