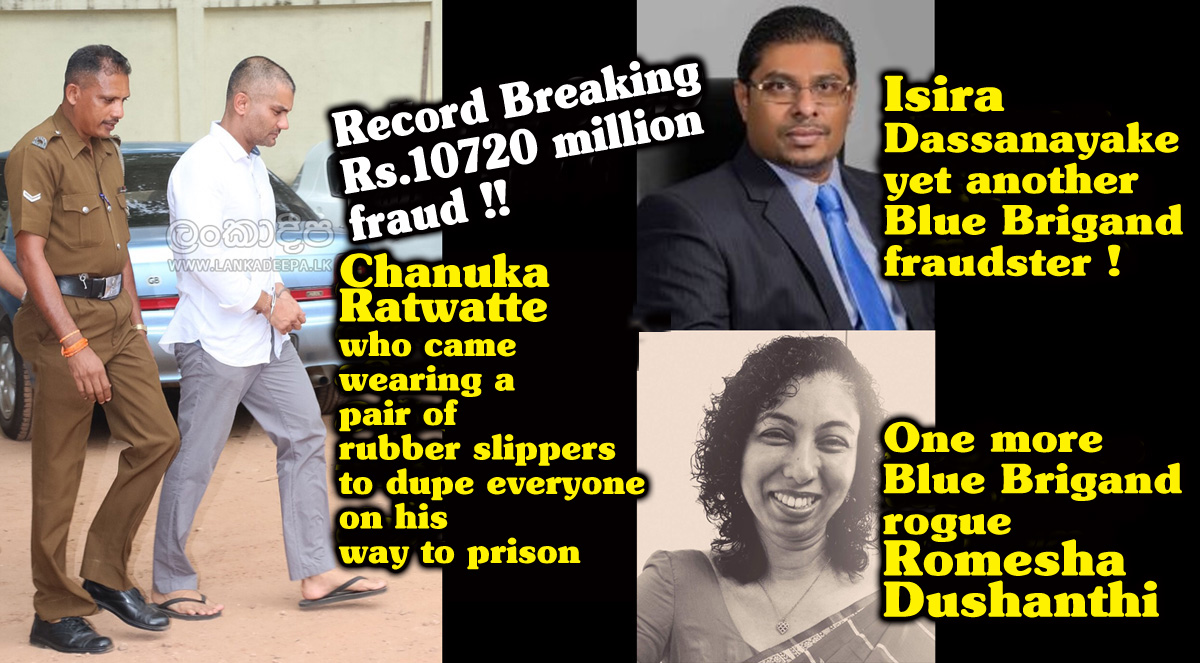 All the suspects were arrested by the FCID on the 14 th noon , and were remanded until the 28 th of September after they were produced before court. The order was issued by Colombo Fort magistrate Ms.Lanka Jayaratne.

These ace fraudsters are the chiefs of Entrust group of companies .Entrust securities PLC Co. which belongs to this group is registered as a Central Bank (CB) primary dealer with the Central bank , and is run with the complete and direct   monitoring   of the  Central Bank .

The EPF and pension fund of the Ceylon Electricity Board (CEB) were  invested  in that Co., as well as the funds of about nearly 350 depositors of the CB regional development department . All these funds have been misappropriated by Entrust group , without depositing  those funds   in  the Central bank.  The FCID revealed this information to court , and charges were  filed against them under the Penal code for criminal breach of trust , and under the money laundering Act.

This fraud had been raging for some time , and it is the former CB Governor Arjun Mahendran who discovered this and lodged a complaint . We salute him on that account.

The Entrust  securities Co belonged to the Ceylinco group , and Isira Dharmapriya Bandara Dassanayake alias Isira Dassanayake the No. one stooge of the Rajapakses during the period 2008-2009 , and  present chairman of the Co. has initially crept into the Directorate of the Co. using the influence and power of the corrupt and crooked Rajapakses , and subsequently functioned as  additional secretary of the CEB.

Sisira who is also a close pal of the then minister of power John Seneviratne prior to creeping into the Entrust Co. Director Board , using his powers as an officer and minister’s patronage had invested Rs. 2.3 billion of the EPF fund of the CEB in Central Bank  treasury bills . With the  support of the officers under whom the EPF of the CEB was , through Entrust Co. the monies had been invested in Treasury bills . He had thereafter  robbed those funds in broad daylight ,by  resorting to  surreptitious activities later.

How CEB’s EPF funds in a sum of Rs. 2300 million  were gobbled up with ex minister of power John Seneviratne’s knowledge !

Firstly , the EPF funds of the CEB were invested in treasury bonds. Isira  had then most craftily through his close friend – the minister, and the Rajapakse regime ( undisputed ‘Kings’ of frauds and  rackets) he had become a member of the Directorate of the Co.  , and within a few months assumed duties  as  chairman of that Co.

Ms. Romesha Senarath the notorious Queen of rackets got herself appointed as the CEO of this Co. , and with  her assistance  a sum of Rs. 2300 million of the CEB was collected back  without the knowledge of the CEB via treasury bonds.  This colossal sum went to line the pockets of the Board of Directors.

The employees of the CEB were not aware of the fact that these monies  have been withdrawn by these rogues and rascals from the treasury bond investment. These rogues have painted the picture to the poor employees  that those monies are still in the treasury bond investment , and have been granting  the exact  interest exactly on time for these amounts while  continuing to commit these daylight colossal robberies.

The robbing  troika comprising the Central Bank officials , the minister of power at that time and CEB officers have jointly committed this most traitorous robbery. These culprits have uninterruptedly continued with this racket until 2015-01-08 , and enjoyed these illicit benefits . However after the advent of the good governance government ,the CEB  trade union had probed into these funds , when it was discovered these monies are not in existence as treasury bond investments., and  those have been withdrawn in 2009 fraudulently. In addition to the CEB fund misappropriations , even the funds of Central bank regional development that were deposited with   Entrust Co.

The total amount when added together is a whopping Rs. 4223 million ! A further sum 0f Rs. 6500 million of private companies and the public have also been invested in Central Bank treasury bonds and bills via  this same Co. Even those monies have been robbed wholesale by this Co. Based on all these reckless and ruthless robberies , the total amount robbed is over  Rs. 10720 million ! Investigations into these monumental racket is still not over.

Under the pretext of lending the monies of this Co. to other establishments , the funds have been ‘pulled’ out  , and hundreds  of millions spent on the Rajapakse regime’s elections, as well as for   the Rugby Tamashas of Alibaba’s crooked ‘Babies.’ Chanuka Ratwatte , Isira Dassanayake , Ms. Romesha Senarath who are  the high ups of the Co., and the members of the Board, as well as the personal secretary of the chairman , Ms.  Samadhi Ferdinando better known as chairman’s ‘lap-top’ working  best when  chairman’s ‘mouse’ is at play,  have got together and cheated on a monumental scale while also wasting most prodigally .

Isira resides at JAIC Hilton Hotel super luxury apartment complex. He travels by helicopter , and has a dozen Race horses at Nuwara Eliya .To look after them millions of rupees are spent . He has a fleet of BMW , Benz cars etc. and a dozen bodyguards . Moreover he has fixed assets and a 2000 acre land in Central Nuwara Eliya  .

Chanuka Ratwatte the great pretender wore a pair of rubber slippers when he arrived  yesterday .He has profligately spent on   Yoshitha Rajapakse who is going to marry the daughter of his brother Lohan Ratwatte. He had gifted   2 super luxury BMW cars for  Yoshitha, which is apart from the colossal sums spent towards Yoshitha’s Rugby mania . As official owners of the Western Warriors team this Co. had met all the huge expenses of the team in the Carlton super 7’s Rugby tournament.  He had also spent in many millions for Yoshitha’s purchases  at Auctions .It is worthy of note ,at the last presidential elections 2015 , billions of robbed public funds were spent .

Romesha the Queen of robbers and  the CEO of the company resides at 320, Union place , in an “Onthree ‘ apartment  belonging to John Keels , She has bought two apartments each priced at Rs. 60-70 million . The monthly salary of hers during the final term of office was about Rs. 3 to 4 million ! Perhaps she is the CEO who is drawing the highest salary in SL. This amount was paid to her to create the environment on the sly to facilitate the frauds , and for counseling.

Samadhi Fernando the personal secretary of Isiri has also been disbursed  many millions of rupees . Her residence was at Narahenpita Trillium residencies  , and travelled in  multimillion rupees worth  vehicles .

It is most significant to note none of them were born rich . Hence they had enjoyed to the hilt only by cheating on the colossal EPF  funds of poor workers , and of innocent depositors . Their hard earned monies had been  robbed ruthlessly and recklessly.

Central bank being the prime bank has the capacity to  utilize its funds in treasury bills and bonds of other establishments with accompanying  security   in Re repo purchases  through treasury bonds , Sadly , they have not acted accordingly.

The monies collected from depositors purportedly to deposit in Central bank securities , had been fraudulently lent to other companies while showing spurious securities. Investigations have revealed , those monies have not even gone into accounts of those companies. In other words , treating the depositors’ monies as an open check , these outrageous  crooks have lined their pockets and committed day light robbery  without even depositing into the accounts of companies which borrowed. The amount involved is as huge as about Rs. 10 billion !

Owing to this massive  fraud, the Central Bank is like a cat on hot bricks , because the public invested  in the treasury bonds or treasury  bills of the bank, and Entrust Co . is an intermediary approved by the CB . It is to be noted that monies cannot be directly invested with   the Central Bank . There must be an intermediary Co. The Central bank is responsible to provide securities only  to  investments made through intermediaries in CB treasury   bonds or bills . That is why such investments are ‘Risk free investments’ , because those are generally possessed of  the Central Bank gilt edged security .However , this is the first time in world history the Rajapakse regime made Central bank gilt edged security treasury bonds and bills into  risk ridden investments. Unfortunately , it is the present government that has to bear the brunt of that burden too !

The FCID that changed the general view hitherto of the masses that when frauds are committed , it is only sprats that get caught in the net , and not  the bandicoots and sharks , must be thanked  profusely, and given a pat on the back.

Lock these guys for life and throw the keys to the deepest part of the sea. We are now suffering cause these types of rogues. We request the President to take the most appropriate action against these hooligans.
-- by Aba Sarana on 2016-09-19

Please prepare more luxury hospital beds, ambulances loaded with food from the Hilton and air conditioned wheelchairs equipped with BMW engines to welcome these pampered and remanded rogues.
-- by N.O. Rajaguru on 2016-09-22