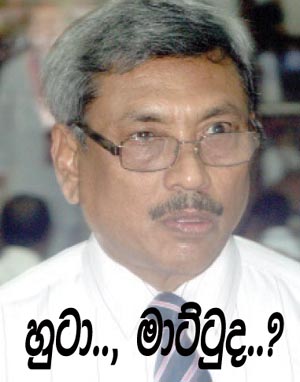 (Lanka-e-News -27.Oct.2016,11.30 PM) Efforts are now under way  to rescue notorious Gotabaya Rajapakse from yet another robbery committed  under the Blue Brigand during the nefarious decade of Medamulana Rajapakse . This is a secret  follow up action that has been initiated by  traitorous stooges of the Rajapakses in the Government analysts department , as revealed by the pro good governance staff  in that department.

At the center of this robbery is the ‘Mausoleum palace’ built in memory  of the parents of Rajapakses built wasting  public funds. Under the signature of Gotabaya, a sum of Rs. 110 million belonging to the Low lying lands development Board  has been paid on account of this  ‘mausoleum  palace’ located at Tangalle.

The investigations into this were  concluded , and the file was sent to the Attorney General (AG) to initiate legal   action ,and in order to confirm the signature of Gota ,the AG’s department has sent it to the handwriting  examination division (department of questioned documents)  under the Government analyst department.

However , the pro good governance staff in the Government analyst department reported to Lanka e news inside information division that the scoundrels and stooges, namely Batagoda and Jayasundara the examiner of questioned documents (handwriting) and his assistant respectively are engaged in a conspiracy moving heaven and earth to issue a bogus certificate that the signature is not that of Gota.

It is a well and widely known fact  that many traitorous  heroes have suddenly turned active   now who are determined to rescue notorious Gota the culprit  who is incriminated in many criminal cases.

If these two venal villainous officers are to issue a bogus certificate for love of filthy lucre that the signature  on the document is not that of Gota who  released Rs. 110 million of public funds to build a mausoleum for the parents of Rajapakses  ,  the next pertinent question is , who is the lunatic who would have stuck his neck out to  place a signature (forgery) to enable others to build mausoleums for their parents..?

On the other hand, if somebody else had forged the signature of crooked Gota, to enable the construction of the mausoleum in memory of the  parents of Rajapakses, what was the chief of the low  lying lands  development doing and where was he looking when that was happening ?

This is to be expected, with Gota having millions to throw about to save himself and govt. officials wanting to may hay while the sun shines, a "benefit of the doubt" element for an accused is being implemented, probably guided by some black-coat of Gota.
-- by punchinilame on 2016-10-28

Enews, Please look into if Nelum Pokuna too was built after some mysterious person or persons forged MaRa's signature.
-- by K. Batuwelgoda on 2016-10-28

Gota with Senadipathy and co have gone overseas to reap the money laundering profits,There is a strong possibility that Avangaurd floating armoury ship is nothing but affloating offshore invest ment bank for money laundering of Rjapakse family,Top politicos of the present govt are also in it
-- by Wwije on 2016-10-28