PTA enactment will be re- implemented disregarding Int. community ; LeN is a source of danger; Wijedasa barks and howls (video) 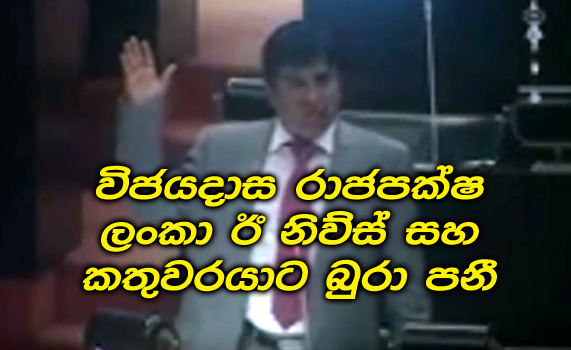 (Lanka-e-Mews -20.Nov.2016, 11.45PM) The minister of justice Wijedasa Rajapakse who participated in the budget debate narrated  a number of controversial stories like Kindergarten children relating fairy tales.  One such story was , 22 members of four Sri Lankan families have gone for ISIS training, and those are families of the higher echelons in society .Extremist Muslim Organizations are arriving here and they are teaching extremism in Muslim schools , he added.

Another controversial tale of his was, irrespective of what the international community says , at the necessary time the prevention of terrorism Act will be implemented. Resorting to Draconian laws intensely the dangers posed to the nation shall be thwarted, he pointed out.

Finally, he said in a mad fit of rage, Lanka e news and its editor are damaging the independence of the judiciary which has been restored after surmounting grave difficulties, and they are a peril to the nation. Moreover , he held out  a warning that an international warrant shall  be issued ,  the editor got down to SL , and sued.

He also remarked , because of Lanka e news , a judge is unable to deliver an independent verdict ,  because Lanka e news is publishing where the judge went to have meals before delivering the verdict  , and about those who collected cash  . Minister Wijedasa  cited  that as an example to illustrate his point. Hence no matter where he is , whether in London or anywhere else the editor  shall be got dawn and action shall be filed against him he insisted . ( May we remind , it was this same story teller  Wijedasa Rajapakse who earlier on said in Parliament , as long as he is the minister , he will not permit  Gotabaya  a byword for corruption and brutality  to be arrested ).

Wijedasa who addressed Kamilini  , a former LTTE organization women’s armed division leader most respectfully as ‘Madam, ’ called the editor of Lanka e news most disdainfully as  ‘Pulanneku.’ (a destitute person)

Lanka e news editor is a ‘Pulanneku’ who was chased out from the country , and he  is  not a journalist . He is one who had placed advertisements requesting funds , and if Keheliya gives him 100 sterling pounds to him with the request to sling mud at him (Wijedasa) , the editor would do that , Wijedasa exhorted.

He also went on to say , while extending an invitation to others ,he would join in to halt the damage that is being done to the national security by news websites like Lanka e news.  He referred to  Mahinda Rajapakse the ex president as his example.

While Wijedasa was barking and howling taking refuge under the parliamentary privilege , it were joint  opposition M.P.s who gave him support ,with Keheliya Rambukwella and Dinesh Gunawardena being the main supporters.  Whatever  Wijedasa forgot was reminded by Keheliya.

WIJEDASA RAJAPAKSA IS SLOWLY BUT SURELY SETTING OUT TO DESTABILISE THE GOVERNMENT STEP BY STEP IN A VERY CRAFTY WAY. IT IS VERY UNFORTUNATE FOR THE NATION THAT MR PRESIDENT AND THE PRIME MINISTER HAVE STILL FAILED TO UNDERSTAND THE CONSEQUENCES OF KEEPING THIS SMILING ASSASIN IN THEIR CABINET. THE INJURIES DEALDASA HAS CAUSED IN THE HEARTS OF YAHAPALANAYA LOVING NATION AS WELL AS TO THEIR GOVERNMENT IS IRREVOCABLE. ANY WISE LEADER WOULD HAVE GOT RID OF THIS PARASITE WITHIN THE FIRST FEW WEEKS IN GOVERNMENT. DEALDASA HAS PROVEN THAT HE IS A SQUARE PEG IN A ROUND HOLE AGAIN AND AGAIN OVER MANY TIMES. BUT THE PRESIDENT AND THE PRIME MINSTER HAVE BEEN STILL SCARED TO SACK HIM FROM THEIR CABINET. THE NATION HAS A RIGHT TO KNOW WHY THEY HAVE GIVEN A FREE RIDE TO THIS DETRIMENTAL ELEMENT IN THEIR CABINET. WE HOPE AT LEAST OUR DIGNIFIED SPEAKER TAKES SOME RESPONSIBILITY FOR THE CORDIAL CO-EXISTENCE OF THE MULTI-CULTURAL NATION OF THE COUNTY AND DO SOMETHING ABOUT DEALDASA TO REINSTATE THEIR CREDIBILITY!
-- by Gamaya on 2016-11-21