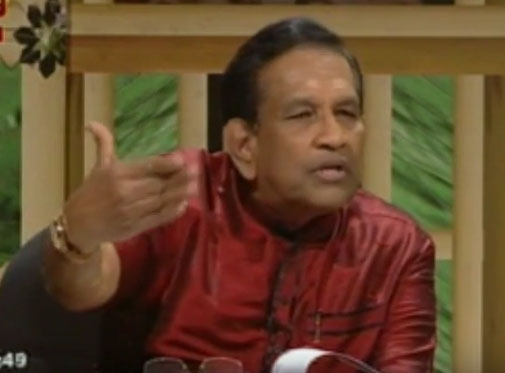 (Lanka-e-News -06.Jan.2017, 11.30PM)   In the MiG jet fraudulent transactions involving Gotabaya Rajapakse the infamous ex defense secretary  , the latter after forging the signature of Ukraine president prepared the second illegal agreement .In the Dubai account of Rajapakses  there is US dollars 1086 million ; there is US dollars 1800 million  in another account , and a further US dollars 500 million in a third account . These monies have now  been withdrawn and taken into Ukraine by notorious Udayanga Weeratunge , minister Rajitha Senaratne revealed yesterday night.

The minister made these shocking disclosures  of the treacheries and traitorous crimes committed against  the motherland by the Rajapakses when he attended a live  political  program on the ITN television channel  . He also said he is making these revelations as an eye witness. It is only a matter of time before the Rajapakses are meted out punishment for their outrageous robberies and murders  , and this is why the traitors and crooks are making frantic and determined efforts to topple the government , the minister pointed out.

The minister also reminded even if the government changes , the crooked mechanics and corrupt murderous Rajapakse machinery will not change ..Therefore he explained what  should be done against them and their cruel , crooked strategies and subterfuges.

The exact reason why we should have an international tribunal/courts to try these frauds. With the local justice system all these crooks and criminals will escape justice. Based on the ruling of the Raviraj case the Minister in charge of justice should have resigned. The problem is he is a bigger crook...
-- by Ruwan Fernando on 2017-01-07

The future Prime Minister has spoken! Why obviously when these facts leaked, did the President or PM utter a word - they had deals, to safeguard their political leadership. When MR issued a threat to bring down the Govt., most probably Rajitha voluntered to put out this news and stand up as a future leader, is my view. Playing politics is the Game.
-- by punchinilame on 2017-01-07