A rare country where people die even under the garbage dump ! -26 dead ,625 homeless – Maharaja’s lapdog Marikar hooted at and chased away by residents ! 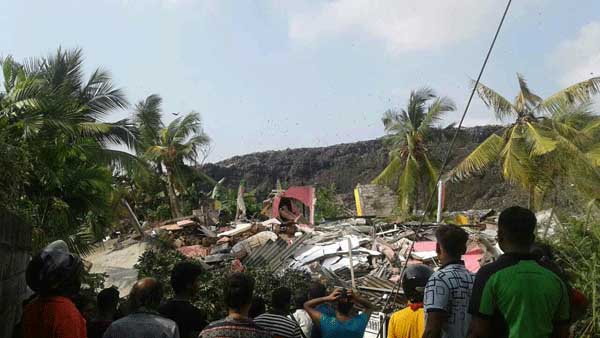 (Lanka-e-News -16.April.2017, 3.15PM) Sri Lanka , the country which is supposedly seeking to become famous as the proud hub of Asia was  plunged in a shameful infamous garbage disaster which claimed the lives of at least 26 victims and destroyed about 140 houses following the collapse of a  garbage dump at Meetotamulla . The country must feel ashamed, for this was not a natural disaster but an imminent disaster  the rulers of the country for the last several  decades were aware of .

In fact this is a garbage dump which was the creation of the rulers over decades to the detriment of hapless and helpless people .

Mahajara Maharaja’s lapdog Marikar M.P. who visited the scene of disaster after everything was  over were jeered, hooted at , and chased away by the people . The Police and the forces are conducting a search operation for more victims since the time the disaster took place .

This garbage dump which was on a marshy land  collapsed at about 3.00 p.m. on the 14 th , and was in existence over a long  period of time suddenly slid under the earth. Owing to this collapse , the earth   at other areas began to  swallow the trees and houses around . Though such a swamp is not suitable for human habitation , destitute people lived there.

It is worthy of mention ,the Sri Lankan governments that ruled after independence being accustomed to procrastination instead of  facing country’s issues direct and finding solutions just wasted  time without resolving the long drawn out  Meethotamulla garbage dump issue.

Ministers of environment so far including Maithri are responsible

It is the ministers of environment of the past and present including executive president Maithripala Sirisena the present environment minister who should accept the full blame and responsibility in respect of this tragedy .As soon as he took over the environment ministry, Maithri  declared he will use his executive powers only to resolve  environment  issues. But , sad to say ,  he is instead  using about five helicopters filling those with his posse and  is attending insignificant meetings daily for self ostentation and glorification   while performing acrobatics and circus clowning . Even two years after his advent not a single  environmental issue has been solved.

Here are some examples  to prove this claim:
Even after the president himself accusing the corrupt Kurunegala environment officer who is allowing the calcium nitrate pollutant to flow into the Deduru  Oya as most corrupt , he took no  taken against him. The corrupt rascal is still free and continuing with his rackets.

Sand mining along the banks of Maha Oya is another example. It was Maithripala Sirisena himself who issued licenses to his favorite politicos including  Hirunika Premachandra and Duminda Silva . These politicos who fatten at the expense of national interests after collecting as many as 7 to 8 licenses distributed those among their business friends and sidekicks . Subsequently when the businessmen started the sand mining operations after investing in millions of rupees , the same Maithripala Sirisena the president ordered a ban on sand mining amidst protests staged by environmental organizations.As a result the businessmen who invested were driven into utter despair .

This is a  clear index environmental issues are not being probed duly or on a plan. Though the president is making grandiose speeches about environment , apparently he has no knowledge , experience or fixed policies in that direction.

The Meethotamulla garbage disposal issue clearly illustrates this sad state of affairs.  It is the UPFA to which party Maithripala belonged that failed to address this garbage issue at Meethotamulla for the last 23 years ,and contributed to its escalation . Hence it  must be held  primarily responsible for this tragedy.

The present disaster management minister Anura Priyadharshana Yapa who was the environment minister at that time , has through his stupid announcement pertaining to this issue only betrayed what an incompetent irresponsible fart of a minister he is. ‘A proposal was made at that time to initiate five garbage disposal areas , yet nothing materialized. Why no action was taken is  something beyond my  comprehension’ this scoundrel of a minister said most unconcernedly and insouciantly . It is this same Yapa who was the minister of environment at that time who is now talking like a baby who has been deprived of the soother .

Toffee nosed Gota who was in charge of the Urban Development Authority in the past , and paraded as a paragon of virtue too due to his rapacious obsession for filthy lucre however earned , only wasted precious public funds and time on paving roads with stone slabs purely to line his pockets with  illicit commissions from those projects , without paying any attention to the most burning garbage disposal issue which was a scourge even during his lawless  corrupt era.

Rajapakses only chased after ‘money making’ and ‘merry making’ at the expense of the people during their entire reign. This has been confirmed by the Rajapakses themselves who are now in and out of prison paying for the unpardonable  sins they ruthlessly committed on the people.

Former environment minister Patalie Champika the present minister too is no better. While talking about  Mega Police he is planting brinjals in paddy fields.

Advanced countries  that convert garbage into something worth …

Advanced countries have converted garbage into something useful .In those countries the residents in the areas where there is garbage disposal , pay about  5 % of their taxes annually to garbage disposal management centers . That sum  is based on the prevailing market value of the property and the income of the resident. The research to recycle the waste for use  is conducted by the Higher education Institutes in  each of those areas.

The businessmen contribute towards that because they can secure later the business resulting from the recycling product following the research. The students who engage in the research while pursuing their studies find employment later in the businesses that are born out of this recycling.

In SL, the government officials and the political leaders have no interest in enlisting  the scholars of higher education Institutes or businessmen towards such a project or method. Neither have they evinced such an interest hitherto.

When there is a leader who resigns from  his  party to defeat it secures the leadership of that same party  later , and seeks to revive and resuscitate that same people discarded party , only to turn everything topsy- turvy , nothing better than people dying under the garbage dump can be expected in such a country .

After independence , our local leaders did nothing at any stage to resolve the country’s issues . All what they did was aggravating the issues .

What a shame ! this is a  country which is getting ready to celebrate its 70 th independence day in all its splendor and grandeur , while a large number of its people are dying buried under stinking garbage dump ! 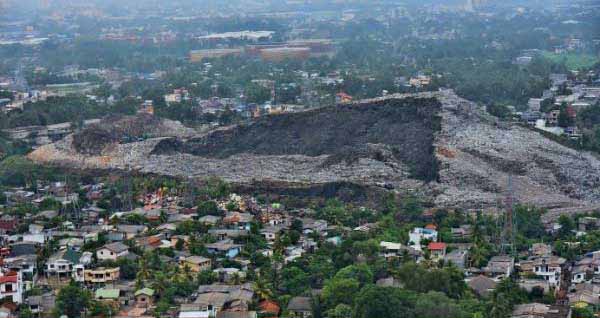 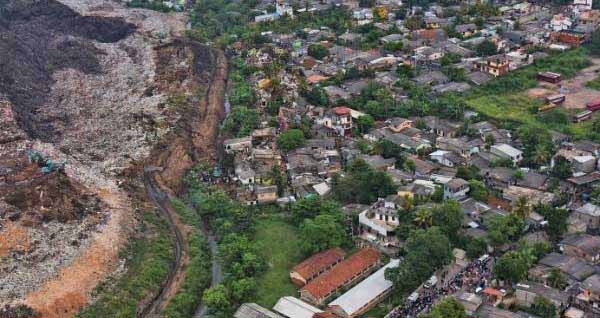 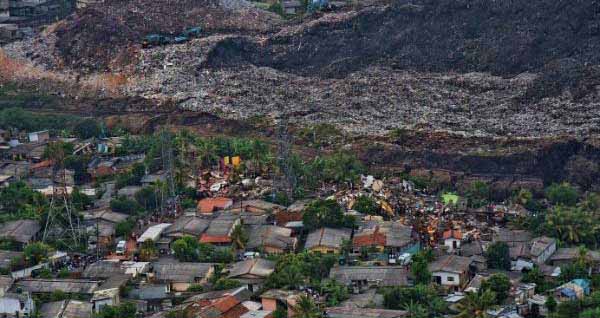