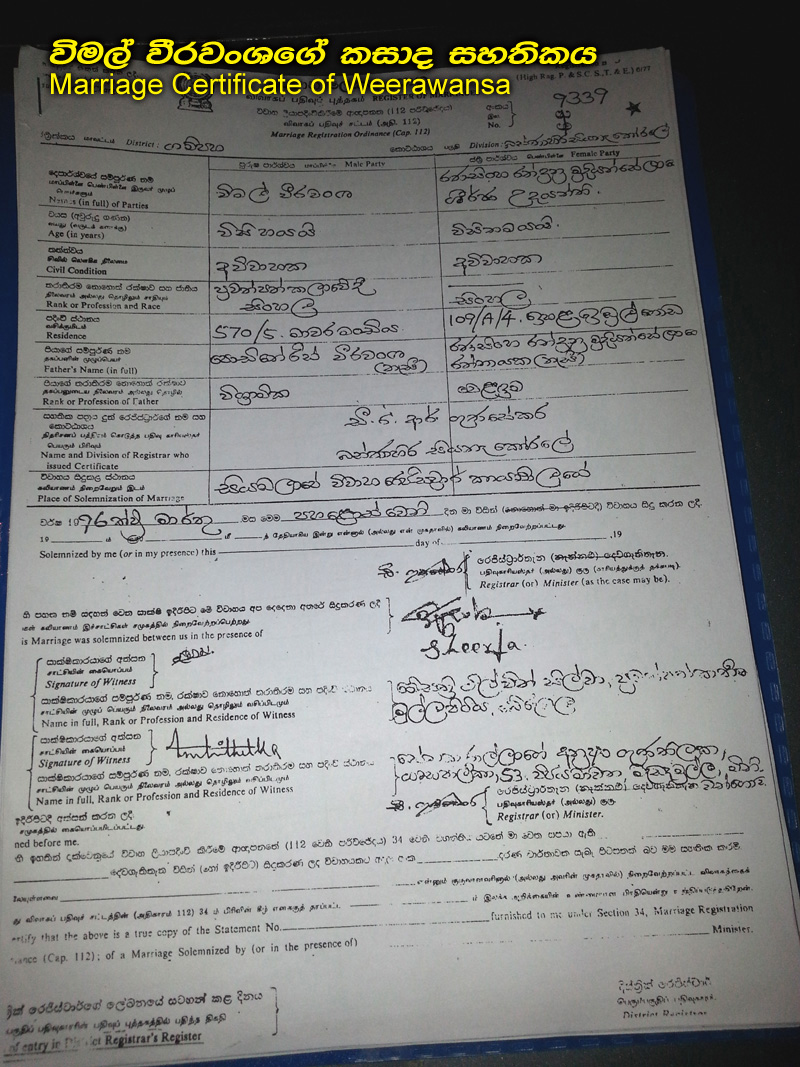 (Lanka-e-News- 29.Dec.2014, 11.30PM) There is one thing common among to all living beings who trod this planet earth. That is every one of them have a date of birth or birthday. That should not and cannot be changed by anyone. Hence, to ensure this, civilized human societies have introduced laws that make such changes as heinous crimes . In Sri Lanka (SL) too this is true.

The Penal code of SL under section 455 , anybody who has altered the date of birth or that in the registers of government records , that individual is punishable with a 7 years jail sentence. In addition to the laws, a civilized human being (unless of course he is a beast by birth behaving as a human with cheap political power) cannot change his date of birth and lead a life. This is because a civilized human being’s cultural background is inextricably interwoven with the date of birth . Therefore , if any individual changes his date of birth fraudulently should not only be liable to a 7 years jail sentence, but a civilized society should also disdainfully treat him as a most shameless uncivilized scoundrel meriting the worst contempt.

In Sri Lanka what we have noted above as frauds and dishonorable conduct refer to a Minister of SL’s present government of Mahinda Rajapakse, who is living fully and freely after fraudulently , brazenly and blatantly changing his date of birth not once, but twice. He is Weerasangili Panikkiyalage Wimalsena alias Wimalasiri Gamlath alias Wimal Weerawansa . Incredible but true , even his wife had altered her name , year of birth , date of birth, and place of birth similarly.

Surely, a Municipal council member cannot make such a glaring obvious mistake with his date of birth . Besides , it is Weerawansa himself who had informed about the birth of his son as stated in the latter’s birth certificate. Therefore it is not possible to assume that this could have been an error made at the registrar’s office , because in the birth certificate of his daughter , Wimasha Vishwadari born 4 years later on 4 th September 2001 at Sri Jayawardenapura hospital , the date of birth of her father Weerawansa is stated again as 7 th March 1965.

In both these birth certificates the name of mother is stated as Sheerja Udayanthi and her date of birth is indicated as 1 st February 1967.

3) By 10 th December 2008, based on a written declaration made by Weerawansa to the Registrar, Weerawansa had seen to it the date of birth of his is changed again to 7 th March 1970.

By this , Weerawansa had again become older than his wife. Owing to this alteration , again, Weerawansa’s wife too makes a written declaration on 28 th March 2011 , whereby Weerawansa is made one year younger than his wife. Consequently , her date of birth 1st February 1967 had to be fraudulently altered to 03 rd February 1971. The most perplexing part of all these vexatious changes and fraudulent alterations is : Through these alterations his wife who was hitherto Sheerja Udayanthi had transformed into 'Shehasha' , a new name. Not enough these changes , her actual birth day 1 st February had also been spuriously altered to 3 rd February .

4.) Weerawansa’s wife had not stopped at that. Even her passport is fake. In it Wellampitiya born Sheerja had transformed into Wellawatte born Shehasha , and her date of birth had become 3rd February 1971 whereas her actual date of birth is 1 st February 1967

5.) In the national identity card which identifies a citizen of SL , in cage 5 is indicated the date of birth. Undoubtedly therefore , the identity cards of Weerawansa and his wife are forged and unlawfully altered. It is significant to note that a citizen can alter his /her name but under no circumstances can he/she alter the date of birth or his/her place of birth. No law permits that. This means that not only Weerawansa and his wife who committed these frauds , but even the government officers who aided and abetted in these activities are liable to a 7 years jail sentence.

(All evidence bearing testimony to this exposures are herein ) 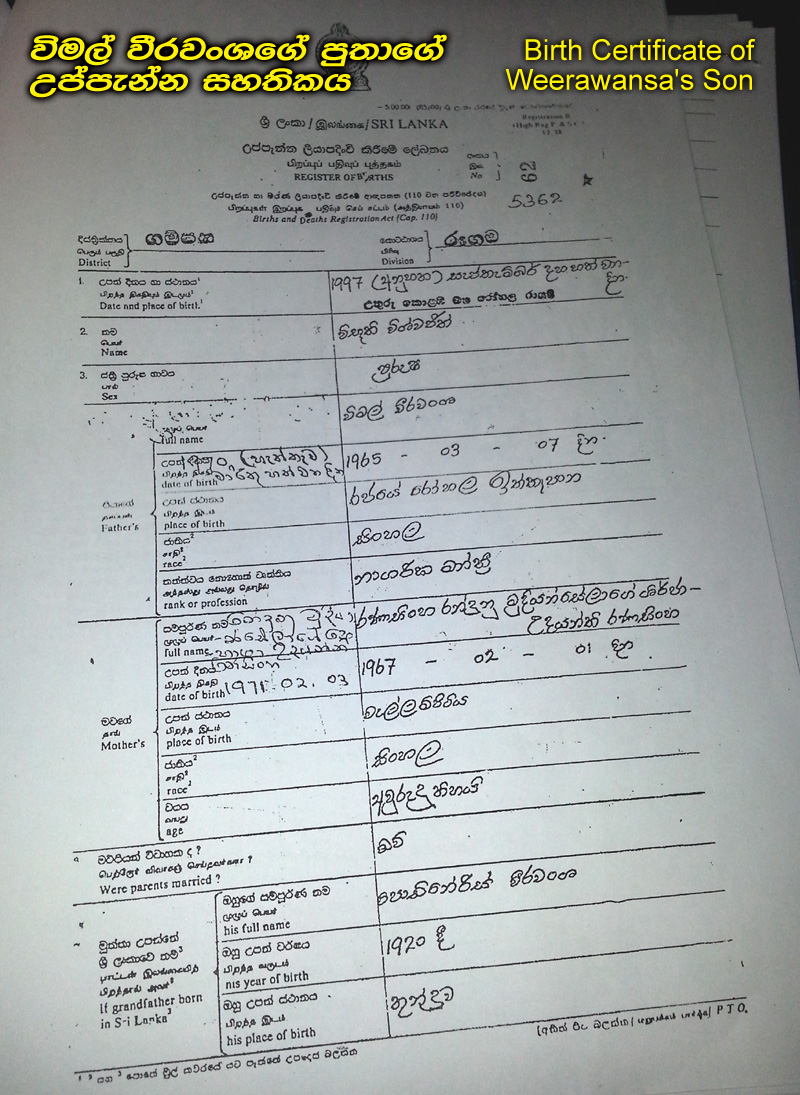 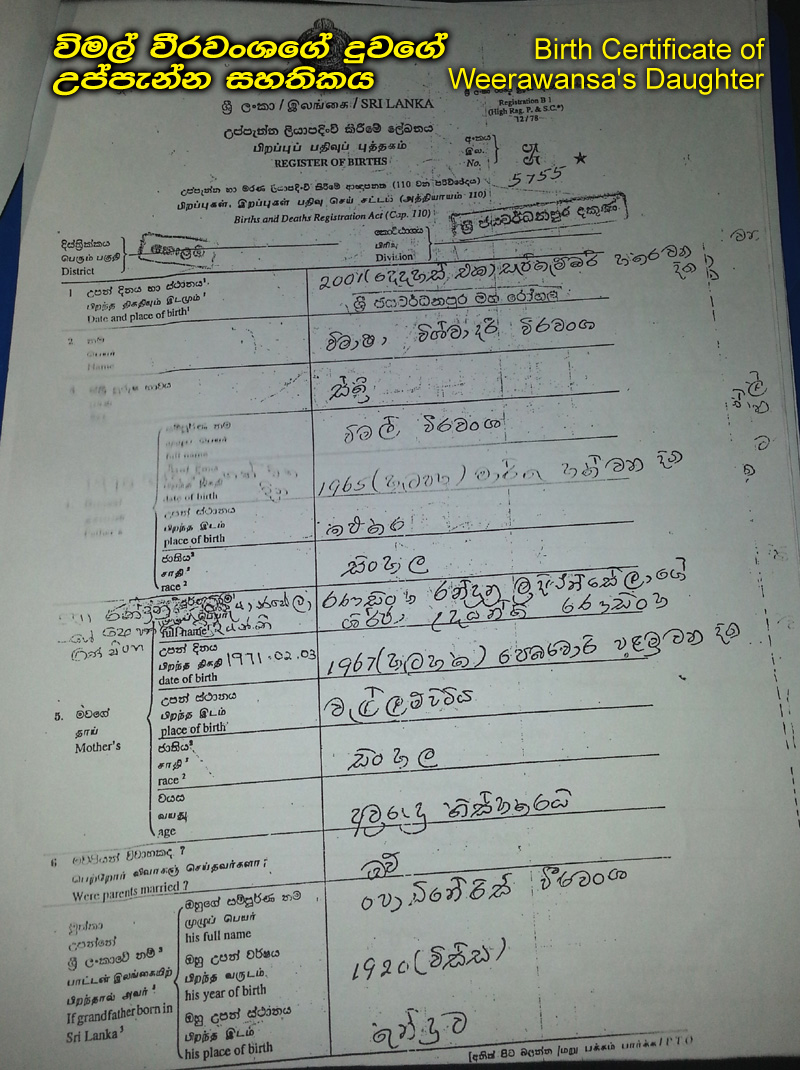 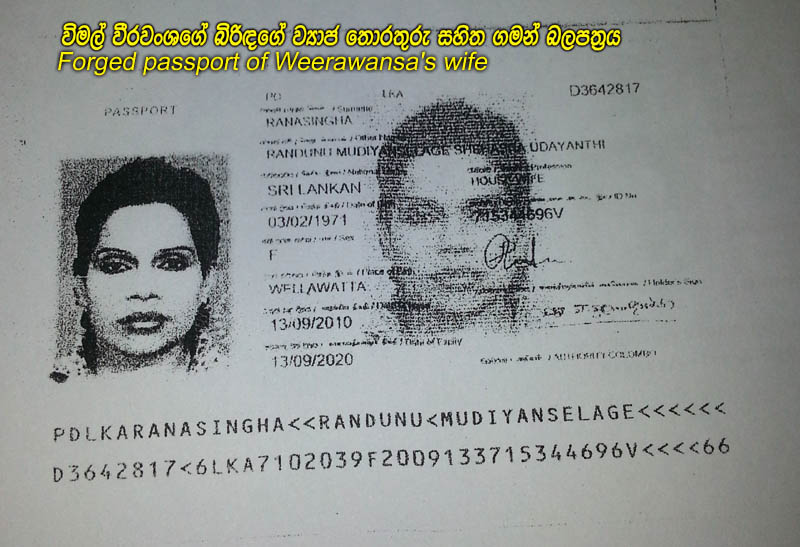 6 discussion on this news

This kind of revelations by some public member must not be termed political mud-slinging but a means of uprising against MR and HIS cohorts. In other words a Sri Lankan spring!. The no. of offences within the Regime, if reported will be THE SPRING, unarmed and soft that will ensure THE CHANGE.
-- by Punchinilame on 2014-12-29

In this day nan age who can be sure who did the forging. What political gain has Wimal got from this? No one falls for this sort of cheap character assassinations. Get real ,
-- by Udaris on 2014-12-30

he is a professional cheat, whether it earned any political gains or not the question here, multiple forget by a thief and wife is the point.
-- by roshan on 2014-12-31

Wimal weerawansha cant accept as a real politician. he is not even a human as his attitudes and behavior
-- by kolitha on 2015-02-03