Action can be filed against MR over his open admission ! Then why wait ? Legal fraternity asks 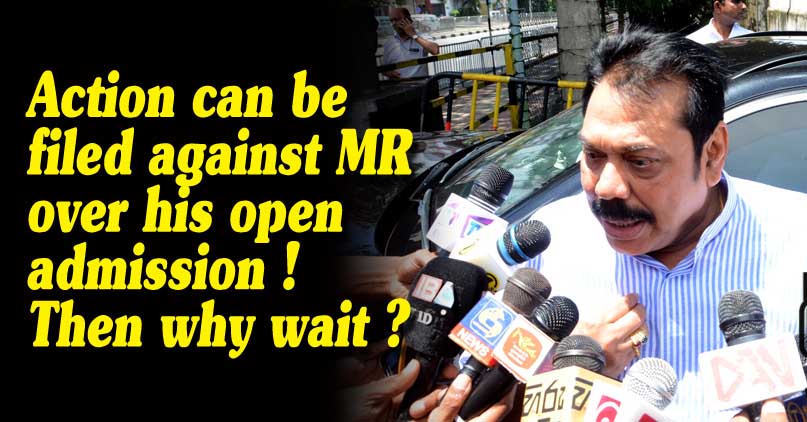 (Lanka-e-News- 14.Sep.2017, 11.45) The recent statement made by deposed and  presently people discarded president Mahinda Rajapakse in relation to the sentence of 3 years rigorous imprisonment delivered by court  plus heavy fines against his ex secretary Lalith Weeratunge and another State officer Anusha Pelita have  stirred up a hornet’s nest among the legal fraternity , who are of the carefully considered  opinion that Mahinda can be hauled up in court  on his recent revelation alone , based on what they revealed to  Lanka e news.

Mahinda said categorically,  when he was the president ,Lalith Weeratunge who was his secretary had to act according to  his orders .Though this is not a new concept, yet Mahinda did not take any steps to appear in court to save his secretary.  Lalith Weeratunge too in court made the same revelation which Mahinda is now saying. That means Weeratunge has clearly acted on the instructions given by Mahinda Rajapakse when the latter  was the president.  Nevertheless , the judge did not consider Weeratunge’s averment as a cause to exonerate him. Instead sentenced him to 3 years rigorous imprisonment while also imposing a heavy fine on each of the two culprits.

In the circumstances , whether that order was illegal or not has to be ascertained by the court , and not based on the fact Mahinda Rajapakse was the former president , or on  his immunity he enjoyed then .

Mahinda Rajapakse does not enjoy immunity any more than that  Chandrika a former president was entitled to . There is nothing extraordinary about his immunity . Neither his Hitler mustache nor his cursed shawl he flaunts proudly render him eligible for additional immunity. Besides , that immunity attaches  only as long he/she is the president. Mahinda therefore has no immunity after he is  thrown out of power. Hence ,all what he can do now to safeguard himself is to wear an amudey and  carry a mammoty instead of relying on immunity. It has already been proved ,if during the tenure of office unlawful actions are committed , cases can be filed against those offences after the presidential term is over……

The Supreme court (SC)  in the case against Mahinda’s predecessor Chandrika Bandaranaike in connection with  the fraud  in which Chandrika during her tenure of office transferred the Water’s edge land to  Ronnie Peiris , a friend of hers via an irregular transaction , the SC in regard to state and private  interests , after weighing the pros and cons clearly explained , section 35 (1) of the constitution concerns the circumstances when immunity is available  , and section 35 (2) concerns circumstances when  immunity is  not available. According to the SC , the president in power is entitled to immunity , and when out of power the immunity ceases to operate.

In the Sri Lanka  law report 339 of 2008 regarding  case No. FR 352/ 2007 Sugathapala vs Chandrika Bandaranaike  Kumaratunge , P.B. Jayasundara and others , the judges Sarath Nanda Silva ( CJ at that time) , Shiranee Thilakawardena and P.A. Ratnayake unanimously decided , the ‘immunity’ of the Executive  president does not mean it is a license given to an executive  president to commit wrongs. The SC made it abundantly clear , after the term of office of executive presidency , the executive president is liable before the law and is answerable to the wrongs committed during the tenure of office of  the  executive presidency .

In that case involving the sale to Water’s Edge Hotel of the  land that was acquired by the government for  development purposes ,  Chandrika was found guilty by the SC . The court imposed a fine of Rs. 3 million on her , and Ronnie Peiris who earned  a profit of Rs. 5.7 million owing to Chandrika’s illicit transaction  was fined Rs. 2 million . In addition the court  ordered that compensation shall be paid to the plaintiff.

When the court verdict of the past  is most lucid and unambiguous , if Mahinda Rajapakse is saying openly that it is he  as president then who issued those illegal orders to Lalith Weeratunge, and if the court too has already confirmed that order was illegal, without any trace of doubt  legal action can be taken against Mahinda Rajapakse for issuing those illegal orders. It has now   been confirmed based on the verdict of the highest court of SL, he does not also  enjoy presidential immunity any more.

Absolutely Right - He should hauled up and sent to the Prison Hospital to keep company with his secretary.
-- by Citizen on 2017-09-15