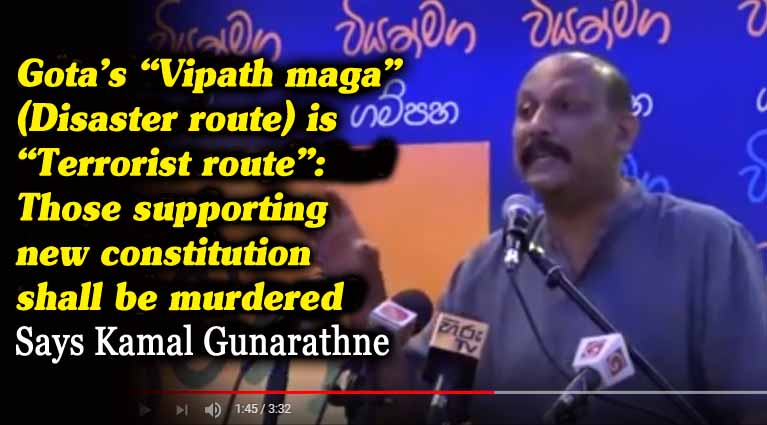 (Lanka-e-News - 26.Oct.2016, 11.30PM)   The organization under the name of ‘Vipath Maga’(Disaster Path) of Gotabaya Rajapakse is indeed  the route to national disaster because it is clearly welcoming terrorism when it is claiming   ‘ the new constitution will divide the country , and since  only traitors will extend support to that, those traitors shall be exterminated .’

This claim was publicly made by  Major General Kamal Gunaratne a chief of the organization at a meeting held by Vipath Maga at Gampaha on the 21 st  .

Gunaratne went on to insist like during the terrorist period  in 1988-89 ,’murder for traitors’ orders were issued  by the terrorists, these traitors too should also be murdered. During the period 1988-89   , in the way the remains  were carried with  their knees up and bodies down to the cemetery  after so murdering , these traitors should also be disgraced , he added.

In the first part of his speech , Gunaratne made a confession that the forces then told lies to the people.  The spokesman for the forces told falsehoods about how many members of the forces died , and it was only the funeral parlors which knew the true number , he added.  Gunaratne while  admitting  the falsehoods remarked  ‘ how many lies we told you. ’

While Gunaratne was making these revelations , ex defense secretary Gotabaya Rajapakse was right in front. It is significant to note it is this same psychotic Gunaratne who is making  such an insane and obnoxious  announcement , was the one while working at the SL embassy in Brazil killed an employee by attacking him with an iron rod.  Though a complaint was received in that regard under the present good governance government , and even Lanka e news exposed the crime with evidence , on  president’s intervention however the criminal episode  was suppressed , and investigation was halted again.

Here is a relevant item re Guneratne and Army Heroes that MS defends to guard his posterior!
-- by punchinilame on 2017-10-28