Maithri’s s-i-l wails over it ! 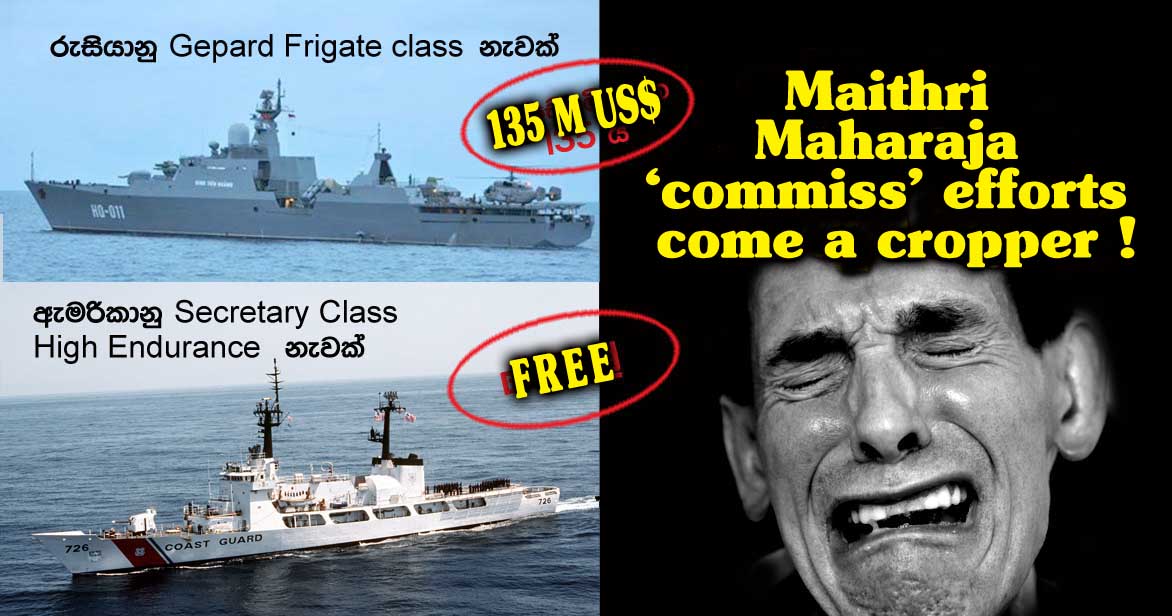 (Lanka-e-News - 08.Nov.2017, 6.25PM)  The illicit Russian decrepit warship deal that was to be transacted by Maithri- Maharaja which would earn them  billions of rupees has   come a cropper , meaning that the suffering masses who would have been hit below the belt by the deal can now heave a sigh of relief.

This colossal deal which  would have  caused a colossal loss of US dollars 88 million ( SL Rs. 134.64 billion  !) to the country spending US dollars 135 million  in the process was engineered with the sole motive  of those involved to  collect a massive illicit commission , despite the SL Naval force  putting the foot down and saying ‘ No’ to this deal. Even a former Navy commander was sent home after his serving only for two months in the post in order to push this deal through because he too duly objected to this transaction in the best interests of the nation.

While determined attempts were being made to purchase this dilapidated ship ‘Gepard Frigate Class’ at almost over double the price , to the dismay and disappointment of the scheming racketeers  of this monumental scam ,America  has expressed its desire  to provide a modern ship ‘Secretary Class high endurance cutter’ fitted with all the equipments ( Helcopter , helipad)   and latest technologies  free  to secure our coastal belt.

This has been mentioned in the US – Sri Lanka joint statement issued by US deputy State secretary (political) Thomas Shennon before he left the shores of SL on the 6 th at the end of  his brief visit . The joint statement states thus :

“As a sign of strong bilateral ties and deepening U.S. engagement in Sri Lanka, the United States announced it will offer a second U.S. Coast Guard cutter to the Sri Lankan Navy, pending completion of Congressional notification.  The Secretary Class High Endurance Cutter will allow Sri Lanka to more effectively police its coastline and Exclusive Economic Zone and to protect its sea lines of trade and communication. “

During the two year duration period of the UNP government too , America gifted a similar ship for security purposes . During the Eelam war , the ship went deep into the sea about 1500 miles and was most helpful in the destruction of LTTE vessels.

As a result of this sudden turn of events  following the magnanimous gesture of America , the need to purchase the old decrepit Russian  warship via the joint treacherous plan of Maithri –Maharaja   with the sole and whole aim of earning huge commissions at the expense of the country has flopped. Maithripala ‘s son in law who was nursing  high hopes of pocketing a huge commission on this Russian warship deal ,and had even opened an account already  in Singapore to credit this huge amount of money is certainly going to suffer beyond measure  due  to this disappointment.  However , the government should  not now have the need to purchase a warship plunging the already debt ridden country deeper into debts on an alarming scale  because we are now getting a modern highly sophisticated vessel free of charge for our coastal belt security operations.

Therefore ,  the balance of US dollars 135 million remaining under the Russian loan that was granted  can now be used not for the purchase of an old dilapidated Russian warship and drive the country into more economic trauma ,  but for most useful purposes : purchase of more useful   machinery which can profit the country or for its  development.

Maithri-Maharaja clan who sent Travis Sinniah on retirement in two months because he was a stumbling block to their illicit commission collection must be now trying other avenues to make a fast buck through other purchases.   Even when America is helping by gifting a modern ship free , the racketeers can still camouflage the scenario and allege America is hatching a conspiracy via this gift , and  insist the Russian warship has to be bought to accomplish their  ulterior motives.

Shiral Lakthileke the black coat  notorious NGO black scavenging crow waiting to fatten even on death and despair may also propel  his Anunayake  (deputy prelates) ‘army’. It is at this juncture the people must be awake  and alert to the traitorous threats and be ready to fight against evil corrupt forces , as well as  be in the vanguard of the struggle to do what is best for the country , for this debt burden will have to be cleared by the people and not by Sirisenas or Maharajas.

The full text of the joint statement issued by America –SL will be published later.

Crooked Sirisena need to accept the free warship from USA instead of buying a piece of crap from Russia for millions. The whole world is watching. Sirisena can talk volumes about Buddhism, how Buddhist scriptures can help any problem in the world, build the highest/biggest Buddha statue of the world in Srilanka, make sinhalese Great Again (follow the Trump with cool aid for the gullible), and promise low prices of consumer goods but he is naked. We see his stinky body parts clearly.
-- by Nelson on 2017-11-08