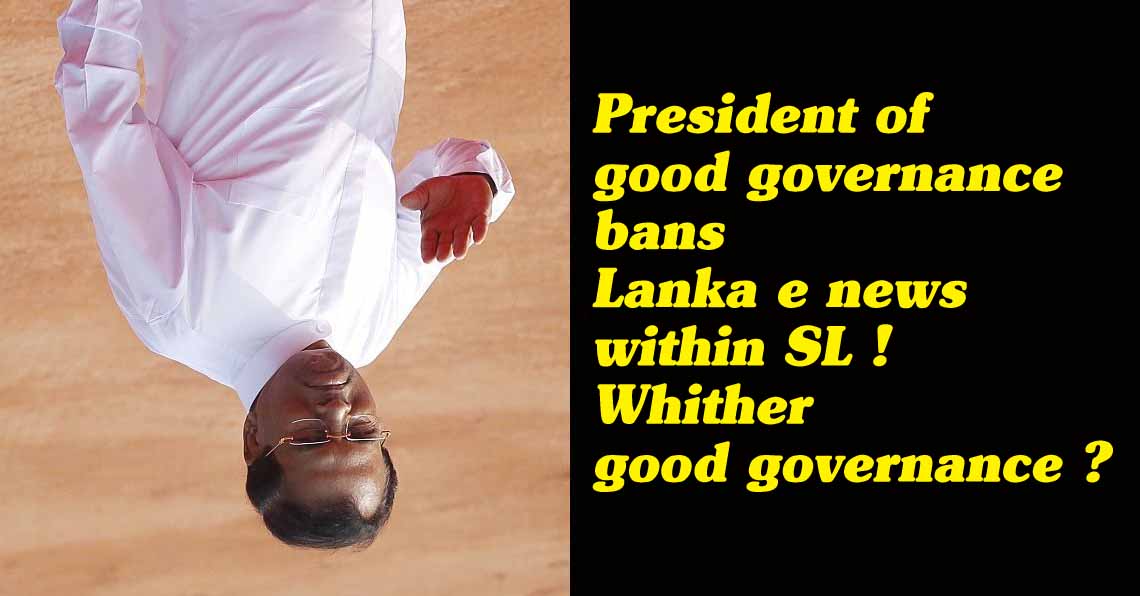 (Lanka-e-News - 08.Nov.2017,11.30PM) The Sri Lanka (SL) Telecommunications  Regulatory Commission (TRC) which is under the good governance president of SL while banning the Lanka e news website  has issued instructions to all internet facility providing companies to forbid the public from browsing  Lanka e news website within SL.

Accordingly since this noon no  one in SL was  able to  browse the news website www. lankaenews.com

Not only the advertisements of many  establishments were stopped but even the arrears of payments due to Lanka e news from them had been suspended.

It is well to recall during the corrupt  brutal Rajapakse regime , the first threat posed to the media was through restriction of advertisements . Next , the CID broke into the office premises and after summoning to the CID they were interrogated.  This harassment  was repeated  9 to 10 times for a year.

Just because a complaint was lodged by us with the police that journalist Poddala Jayantha had been abducted , the editor and news editor were hauled up in courts  on frame ups that Lanka e news was involved.

Thereafter a colleague of ours  Prageeth Ekneliyagoda was abducted and went missing. In fear the editor  too had to flee the country . At about the same time arrest of journalists on false charges and remanding them commenced in Sri Lanka .  After that the Lanka e news portal and its valuable library were set on fire , reducing the whole premises to ashes. Some months later Lanka e news was banned. Those ordeals and uncalled for  sufferings were faced by Lanka e news during that period of media suppression and killing of media personnel.

Following the advent of the good governance government , the ban on Lanka e news website was lifted and the investigation into  the disappearance of Prageeth Ekneliyagoda was begun. However the arson committed on Lanka e news was not investigated. Though several high rung officers of the army were arrested and remanded in connection with the Ekenliyagoda disappearance, the president in his intense craziness and with  utter disregard for the sacrosanct law released them on bail . An  accused (army)  who is out on bail is not reinstated in service , yet the president reinstated them in service. Thereafter the investigations were disrupted , and now nobody knows  what happened to the investigations.

Later , the president sought to obtain an Interpol warrant  through a henchman of his against the Lanka e news editor which  attempt came a cropper. Having failed in that direction , a bogus case was filed through the henchman .

The president then announced compensation shall be paid to the journalists who were victimized  and to the media Institutions which faced losses  including Lanka e news. That was only flashy verbiage worse than smelly garbage of which the president has in plenty. Until today president’s promised compensation too never returned after it was sent on pension by him.  Instead he has now  started paying ‘compensation’ through imposition of bans.

When president today attended the second death anniversary  of late Most Ven. Maduluwawe Thera who made a major contribution towards the victory of good governance government , he said , he appointed a Commission to apprehend the crooks , and those crooks have paid monies to the websites operating from abroad to sling mud at him.

Let us emphatically state  , the ban imposed on Lanka e news constitutes  a huge blow to the right to information.