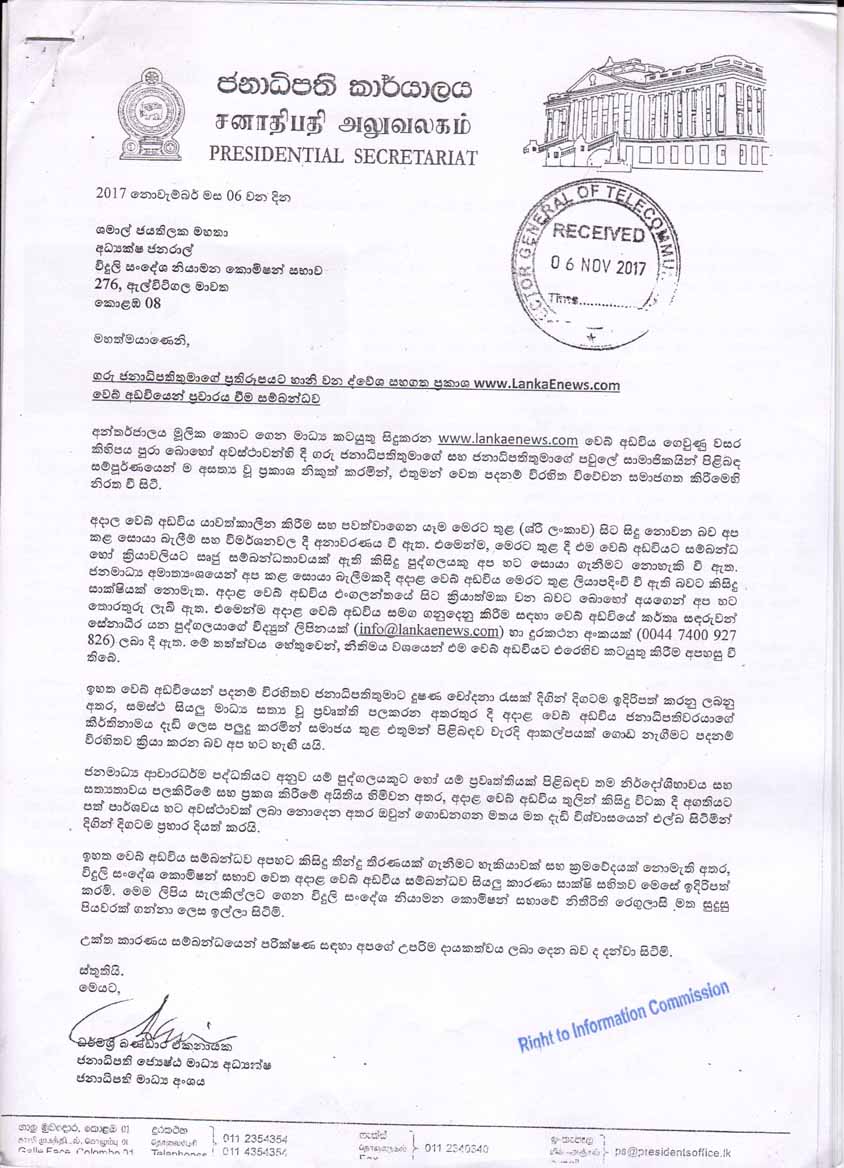 (Lanka-e-News - 16.April.2018, 9.40PM) It has come to light that  Lanka e news was illegally blocked on a letter issued by the director ,  presidential media based on the investigations conducted by the RTI (Right to Information) Commission into  an appeal made to it.

Ms. Raisa Wickremetunge of Ground views made  an appeal to  RTI Commission for refusing to provide information citing national security as a reason when inquiries were made from TRC (Telecom Regulatory Commision) as to why Lanka e news was proscribed.

Following an investigation , the RTI Commission which inquired into it had given a verdict  that the presidential media director had blocked the website on spurious  grounds , and the decision taken by the TRC to refuse giving information shall be reversed.

The letter sent to  TRC by Dharmasiri Bandara Ekanayake , the director presidential media  ,and the news report of Lanka e news regarding the president which is the subject of accusation are in the image .

The presidential media director by his letter and the TRC director general, before the Right to Information Commission (RTI)had said they tried to contact Lanka e news regarding the LeN report but without avail.

That is an absolute lie. A lie that deserves sentence to the gallows.  The e mail , telephone and skype of Lanka e news are active all 24 hours of the day, and no one had responded  in connection with that report.

If they had we challenge these liars who thrive on mendacity using their official labels and ranks for their own selfish survival to adduce proof in support of their statement . In the least , no one has even responded  or commented via the LeN face book page.

Lanka e news which warmly welcomes right to answer  , if we  had really received a response , certainly we have  no reason to refrain from publishing that.

In any event Lanka e news will soon give a reply to the presidential media director’s  letter no matter how stupid ,which was addressed to the Director General  of TRC .

A report pertaining to the RTI investigation and decision is hereunder.

The Appellant by information request dated 10.11.2017 has requested the following information.

The Appellant being unsatisfied with this response, then appealed to the Designated Officer (DO) on 07.12.2017, The DO responded on 15.12.2017, stating that with regard to item 1 of the information request the PA had informed the Fixed and Mobile Operators to block news website based on the instructions communicated to it by the Ministry of Mass Media and as such, it did not have any records of complaints against websites in its possession or custody. With regard to item 2, the information had been provided to the Appellant. The decision of the IO with regard to item 3 was reiterated.

Matters Arising During the Hearing:

The IO of the PA stated that the PA entertained only telecom related complaints and not complaints against Websites. She submitted that complaints in respect of websites are lodged with the Ministry of Mass Media as websites are registered with that Ministry.

The IO was reminded by the Commission of the duty on Public Authorities under Regulation 4 clause 6 of the Right to Information Regulations of 2017 published in Gazette No 2004/66 dated 03.02.2017, to transfer the said request to the relevant PA where the IO is aware that the information is held by such PA.

The IO then stated that she had in other instances transferred such requests but had refrained from doing so in this instance as the said request as it did not contain a general question but a specific question related to the TRCSL.

The Appellant stated that according to her own understanding the TRCSL was the relevant PA to file the information request with.

The IO further stated that the Director General of TRCSL had requested for a further date to make his submissions on this matter.

The duty to transfer as provided for in Regulation 4 clause 6 of the Right to Information Regulations of 2017 published in Gazette No 2004/66 dated 03.02.2017 has been stipulated for the exact purpose of preventing an Appellant from going from pillar to post in the search for information. All PAs are required to abide by this duty rather than attempt to circumvent the same.

The PA is directed to inquire from the Ministry of Mass Media as to what information is in its custody, possession, or control relating to the information request of the Appellant and apprise us of the same.

The PA is therefore directed to file written submissions before March 12, 2018 detailing its specific justification of the exemption cited by it in denying the information in respect particularly of the plea invoking Section 5 (1) (b) (i) (ie; that the information would undermine the defence of the State or its territorial integrity or national security).

Matters Arising During the Hearing:

The DG of the PA stated that items 3 and 4 were in relation to news items about the President and his family. He stated that there had been a written complaint made to TRCSL by the Office of the President regarding unsubstantiated stories appearing in the form of news items in the Lanka-E-News website. Copies of those news items had also been attached to the said complaint. The DG further stated that the documents in his possession that he presented for the perusal of the Commission were the only documents the PA had in regard to this information request and that they do not have any more records.

Having perused the complaint made by the Office of the President and the attached news items, we see no reason for the information to be denied to the Appellant. The veracity of the news items in question are not for this Commission to decide. The complaint submitted by the President’s Office on November 6th, 2017, only brings these news items to the notice of the PA and requests that suitable action be taken according to law. This is legitimate information that may be disclosed by the PA.

The PA is directed to provide a copy of the complaint and attached news items to Appellant. The Commission is of opinion that these documents fulfil items 3, 4 and 5 of the information request made by the Appellant. The PA is directed to liaise with the Appellant with regard to providing the information requested in item 1 once it receives a response from the Ministry of Mass Media.

The decision of the DO is reversed. The Appeal is concluded. 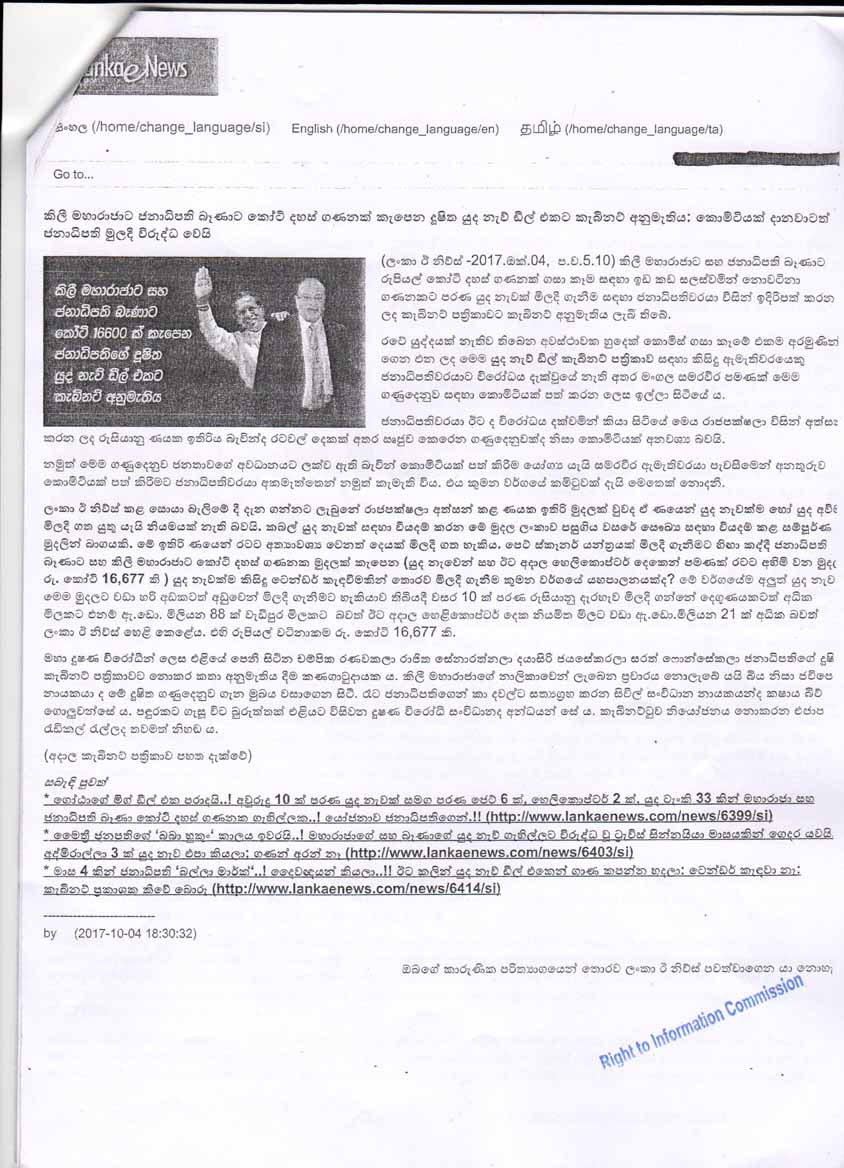 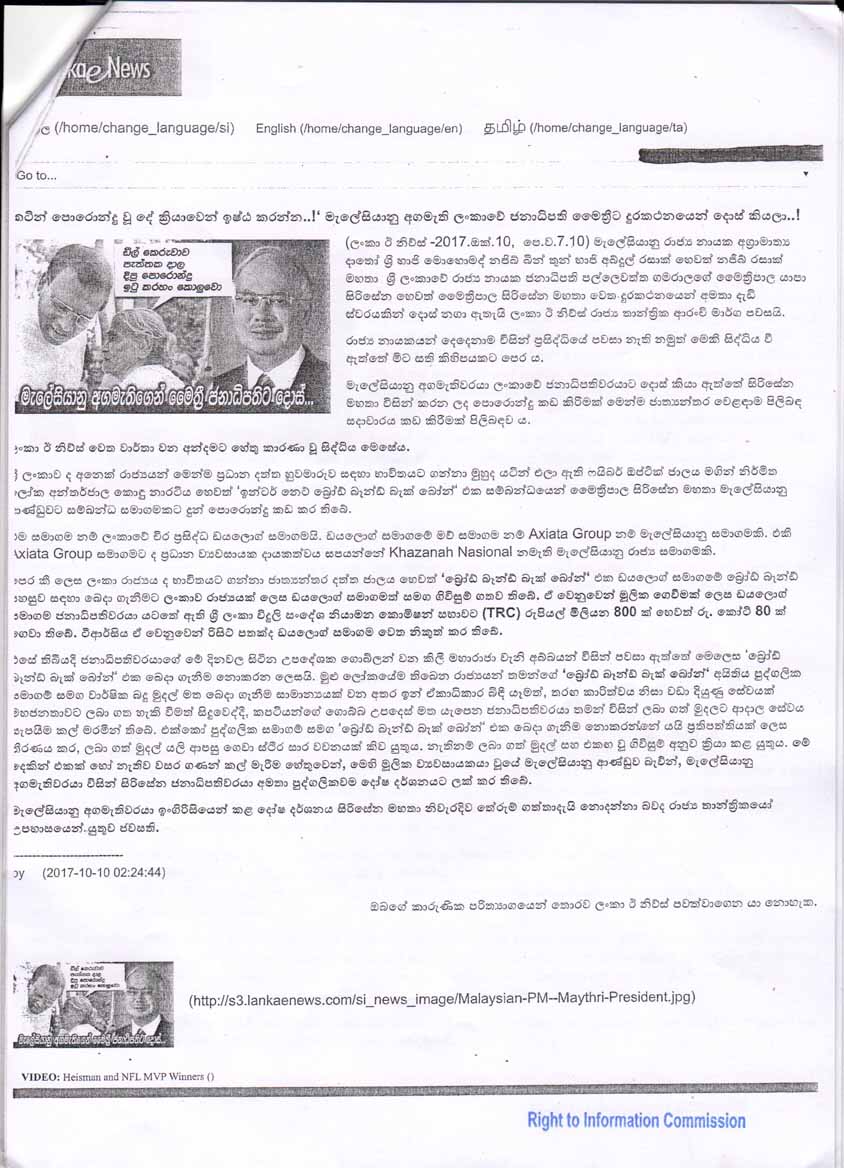 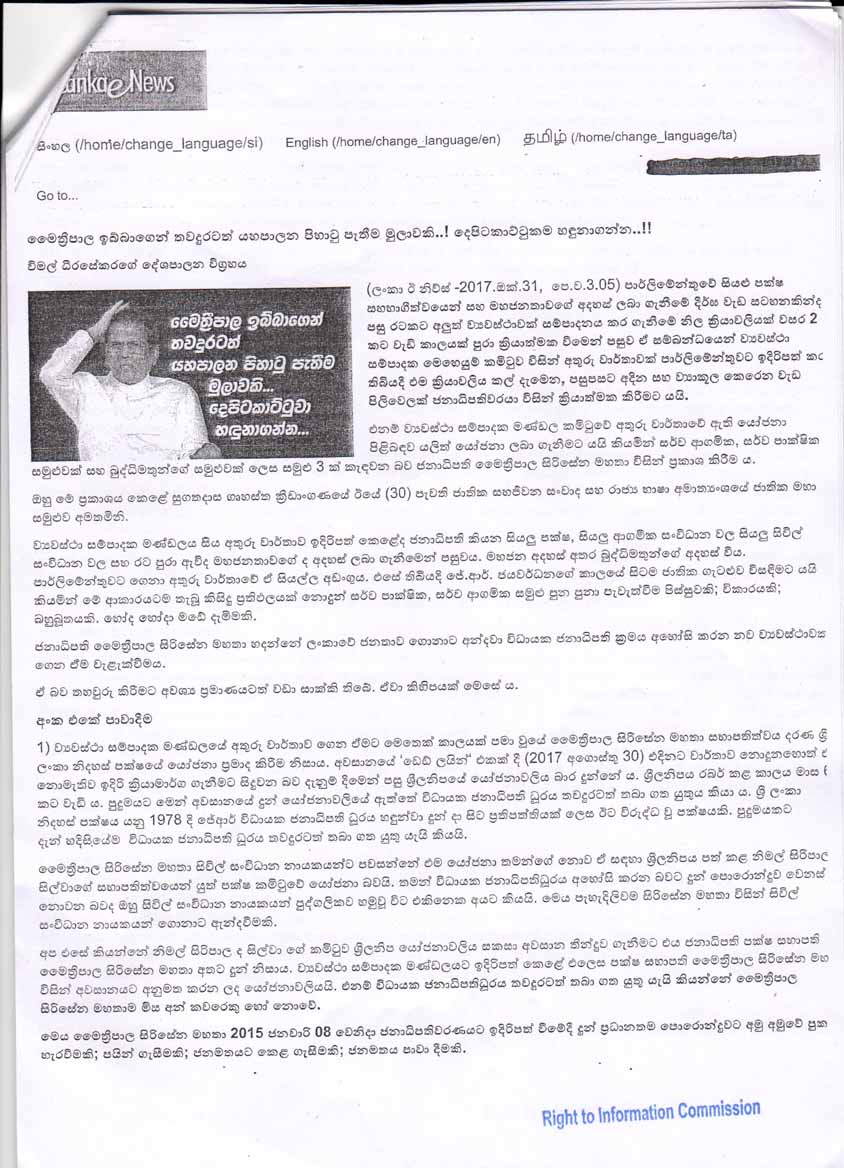 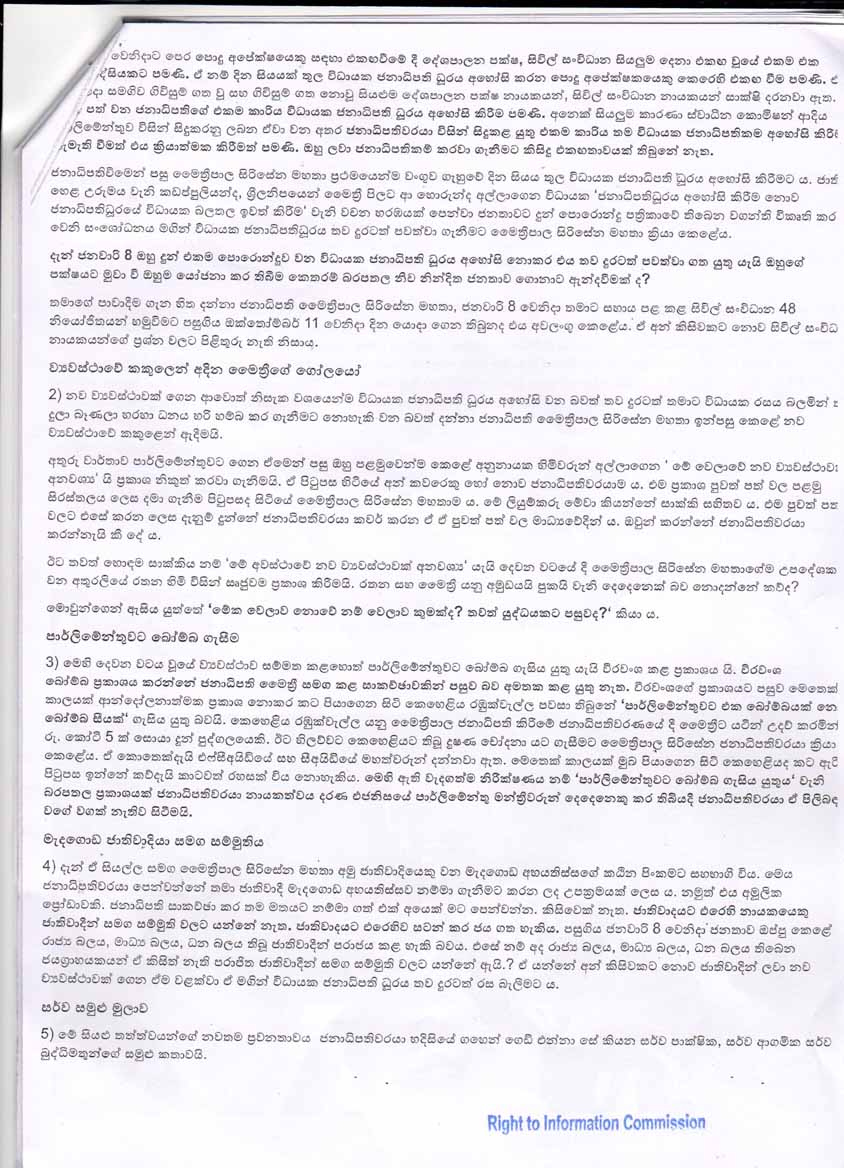 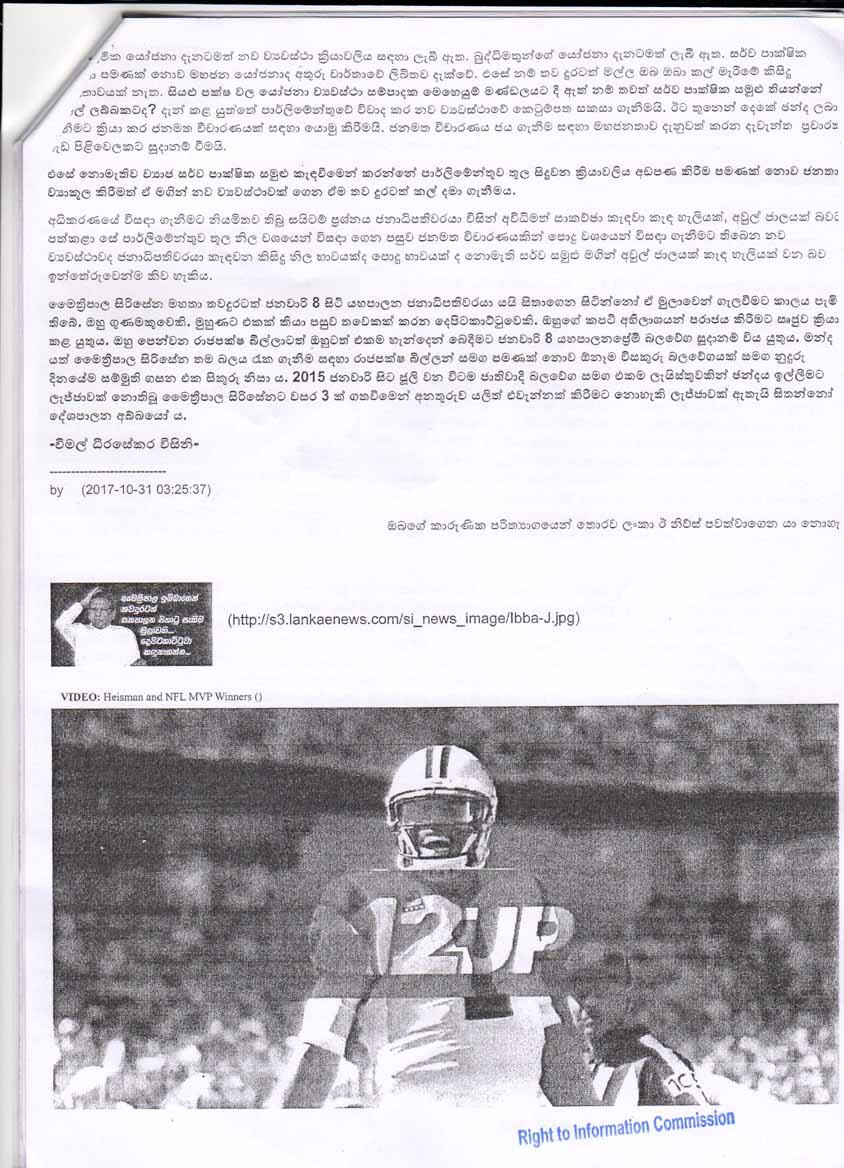 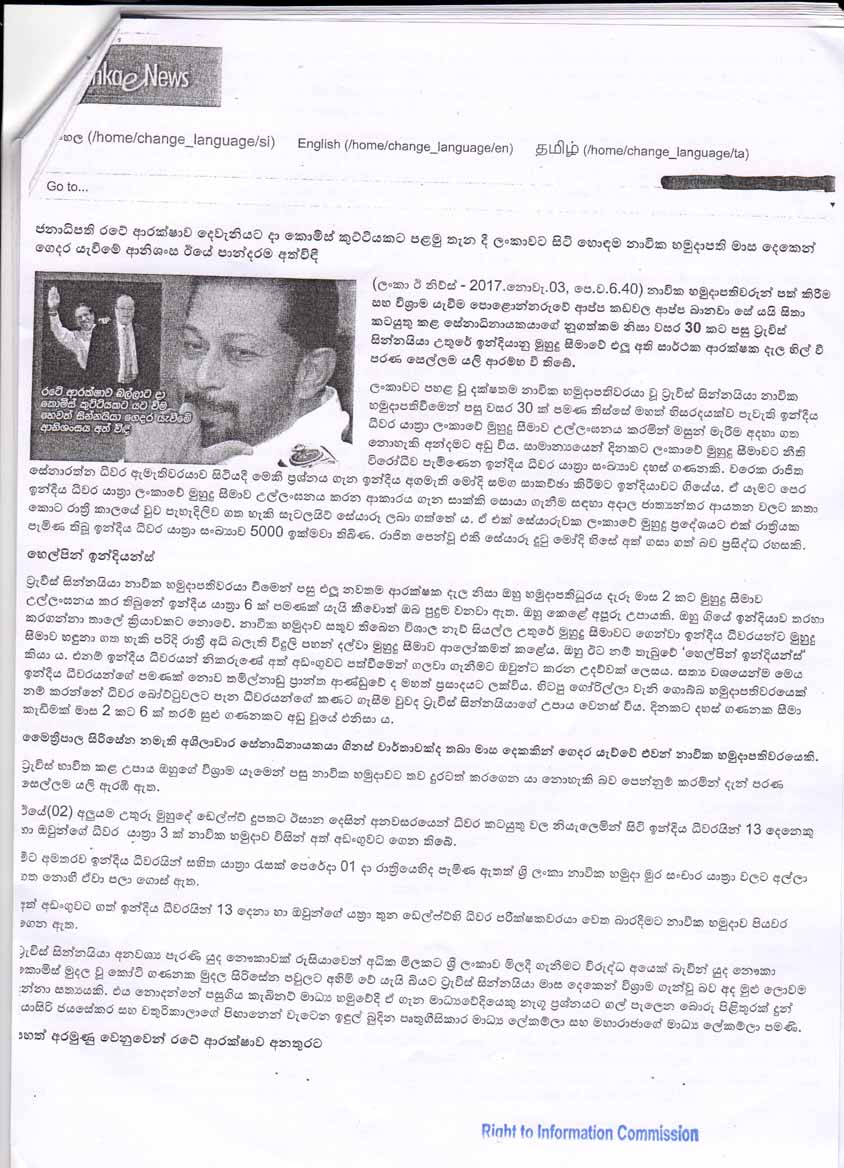 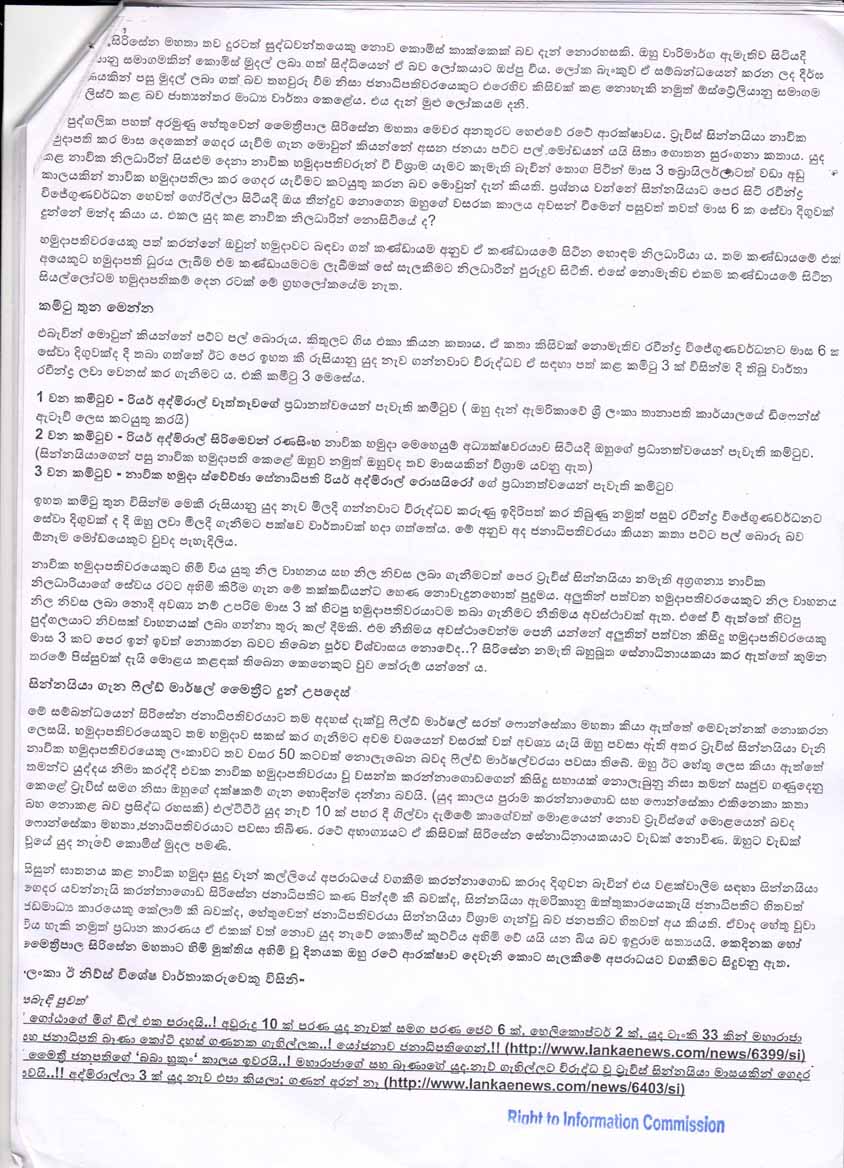