Lanka e news prophecy will be proved true ? JO to call for a debate on ‘Rala-throne’ speech on 8 th May ! 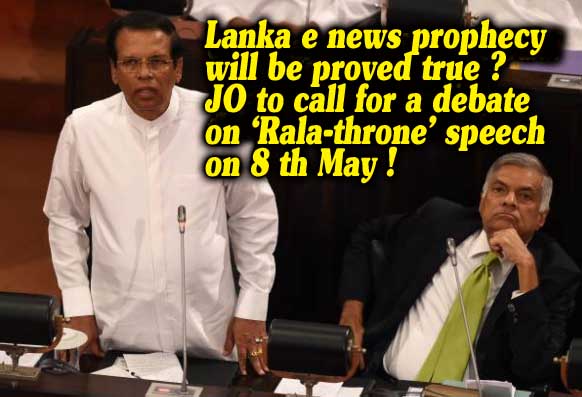 (Lanka-e-News - 26.April.2018, 8.00PM)   Lanka e news  was the first to post a report on the 20 th to highlight the dangers  under the caption ‘Govt. in peril again ! What no confidence motion failed to achieve can be accomplished by throne speech ? Latest development.’   As was prophesied in the LeN  report , the joint opposition has decided to call for a debate lasting two days on the policy statement to be delivered by the president on May 8 th, according to Kumara Welgama’s statement to the media.

Gamarala who was in London speaking to BBC with regard to the portentous report of Lanka e news  said , it is only those who  engage in mad politics ‘make such wrong analysis’

However some who referred to the  ’throne speech’ which we made  mention, said , since the ‘throne speech’ has been  eliminated under article  70  of the   constitution  , such a danger we forewarned does not exist.

In the past the ‘throne speech’ was delivered  by the head  of the State from the speaker’s chair. Now the ‘policy statement’ is made from the seat assigned to the president in parliament . In the circumstances , the term most appropriate to Gamarala’s speech on 8 th May is ‘Rala- throne  speech ‘

Article  (2 )(a)  of the 19th amendment to the constitution states thus :  ‘Each time the Parliament has its inaugural session  there also exists the power to deliver the government’s policy statement. ‘ This is apart from the powers vested by virtue of the constitution and the written laws.

If the government’s policy statement or appropriation draft bill is defeated  , and based on  that a  no confidence motion is brought against the government which  is passed , dissolution of  cabinet follows.

It is very clear therefore on the 8 th of May , if the government is defeated based on a  vote taken at the request of the opposition over the president’s policy statement , the cabinet will be dissolved, and the government will be   eventually  defeated. In other words the government will  slip into a parallel  perilous  situation it confronted  on the 4 th April  when the no confidence motion was brought against the Prime Minister.

What Lanka e news always first with news and best with the views highlighted was this portentous  position , but to Gamarala alias Sillysena this was  ‘mad analysis’

In any event according to article 2 a of the constitution ,  president’s  policy statement is not mandatory. Therefore if that impending danger is to be averted , the president can inaugurate the session without delivering a policy statement . However the utterances president Gamarala made  after urgently  getting  down his discarded  ministers at his own expense  to London cannot be trusted. These are the ministers who lost their portfolios when  trying to bring a no confidence motion against the P.M. earlier on. The distrust and mistrust attaching to Gamarala are   based on  his  overriding satanic  traits which include  mendacity and dishonoring promises .

It is a well and widely known fact , Gamarala is possessed of a rare ability to profusely  lie using every stinking orifice of his body;  for biting the hand that feeds ;  resorting to the worst surreptitious  cutthroat activities; killing the goose that lays the golden eggs; and shamelessly and dangerously threatening to set fire to everything when he is threatened with ejection  .

His sole and whole objective is,  even if the country is driven into a holocaust  and plunged into the worst despair , Ranil who steered Gamarala  to the presidential throne shall be chased out , in order to  form a government under another P.M. In the circumstances , May  8 th is a crucial day for all .

Connected report …
Govt. in peril again ! What no confidence motion failed to achieve can be accomplished by throne speech ? Latest development..