Our process of reform and reorganization does not end; Fully implement the suggestions of Ruwan Wijewardhane Committee report; 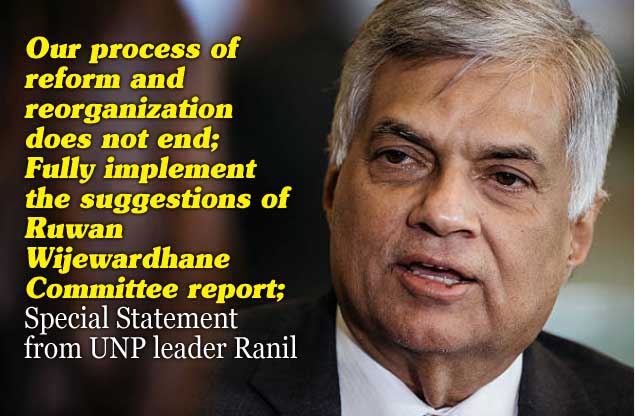 (Lanka-e-News -29.April.2018, 8.45PM) Many of the younger members of the team have involved in driving the process of organizing the United National Party forward to enhance the day today functions of the Party. As such, a number of appointments have been made. Among those who have come forward to take on responsibilities for the Party are: Mr. Naween Dissanayake who has been appointed as the National Organiser of the Party, Mr. Akila Viraj Kariyawasam appointed as General Secretary, Mr. Harin Fernando appointed as head of mass-communication campaigns, Mr. Harsha de Silva appointed as Treasurer and Mr. Ajith P. Perera appointed as Trade Union Secretary.

The new energy and approach that they bring will undoubtedly pave a strong way forward, together with the Deputy Leader and the Assistant Leader. With their commitment and untiring efforts, there can be no doubt that the Party will progress.
We intend to allocate new responsibilities to the Deputy Leader in order to further strengthen our journey to victory so as to drive the process of organizing the party towards the success.

We also intend to create new posts by appointing a Secretary and Assistant Secretary to further strengthen and organize the party. We hope to give more opportunities to young Members of Parliament to help drive forward the Party’s mission.
We are aiming to give specific responsibilities to each of the Members of Parliament and with this in mind we are developing an initial procedure to do this.

Our supporters, who have faithfully backed the United National Party, even through the most difficult of times, must be given high priority. There remain a number of unresolved issues with our supporters that must be addressed. Furthermore, there are cases where justice has not yet been served where our supporters have faced injustice and we pledge that appropriate and immediate action will be taken regarding all these issues.

You may ask why we have taken action to re-organize the Party following the local Government elections.

The United National Party is a party that listens its supporters and the people. We are a party that considers people’s opinions, attitudes and responses.

We have accurately read andidentified the message given to us by the people in the last Local Government elections and we are acting to implement the necessary changes. In order to achieve this we have made use of several Committee reports. The reports were reviewed by a committee that was elected by Members of Parliament, and following discussions, recommendations were presented at the working committee meeting held recently.

By reorganizing the Party at the wish of the people we have demonstrated that United National Party is the only political party that is flexible and people focused.

There are people who have criticised our re-organization, and there are those who have made light of this process. But none of them worked towards bringing our party to victory during the last local election. In fact some of them actively worked against us. Some of them had the hidden objective of destroying the Party. However, we should not worry about their agenda.  What we must instead focus on is taking the necessary action to strengthen the party with increased commitment.

Discussion and convention have always been the means of resolving our problems. Where possible, we always work to come to a common agreement on any issue, whether this involves the working committee or our Members of Parliament. It is the proud tradition of the United National Party to respect all views, even controversial views, until a final common decision has been made. It is the duty of the true supporter to understand these traditions and to preserve them.

Our process of reform and reorganization does not end with this. We have taken a policy decision to implement the suggestions mentioned in Ruwan Wijewardhane Committee report. We will take action to bring relevant constitutional amendments as well.

Accordingly, we have planned to elevate more new faces to the level of the leadership and to bring in young blood to strengthen the party further. The group of Members of Parliament, the working committee together with the newly appointed officers will implement the above plans with the utmost commitment and effort.