President Gamarala in his eagerness to oust P.M. has outrun his sureness : Derelicts duties and causes Rs. 1500 million loss to govt. !! 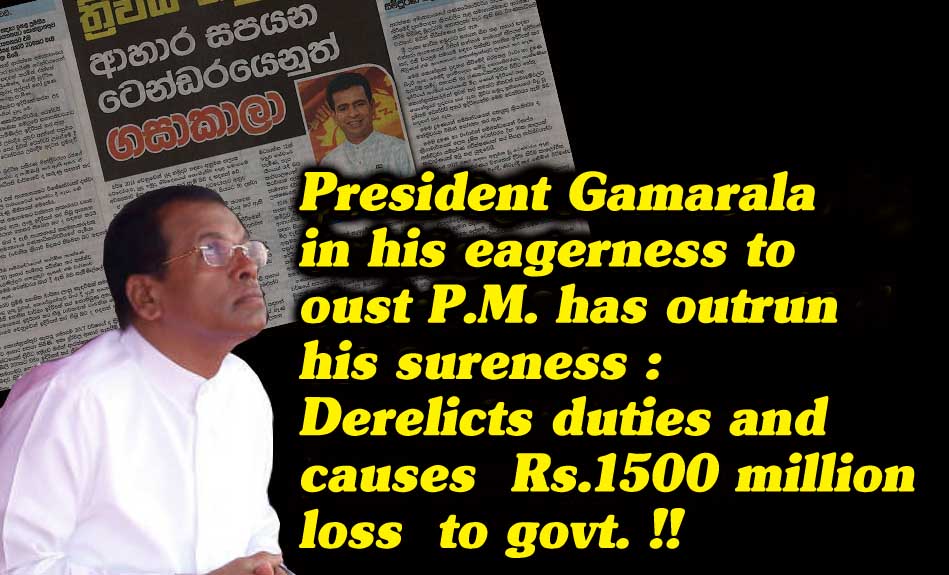 (Lanka-e-News - 01.May.2018, 9.15PM)  President Gamarala who is now precariously clinging on a 4 % vote base owing to his own follies and lunacies , and from the beginning of this year -2018 , was tumbling over in a mad haste to chase out the prime minister , has caused a loss of Rs. 1500 million to the  government by end of April 2018 consequent upon his gross dereliction of duties as the defense minister. His eagerness to outfox and outwit the P.M. has outrun his sureness of his most onerous duties.

The complaint against this egregious  blunder of presidential  plunder was made by Buddhika Pathirane M.P.

This massive loss has resulted because the president who is also the defense minister while wasting his precious time on scheming   and plotting against the P.M. had failed to call for tenders on time to register  suppliers for the supply of food to the  three forces .

Unfortunately , for president Gamarala what was more important than his most responsible  duties towards the nation was his plotting to chase away P.M. who in fact on the other hand was the one who steered Gamarala  to the presidential throne.  As a result of this neglect Gamarala’s urgent duties of registering  suppliers of food for the forces on time was forgotten. Due to this grave lapse , the supplies had to be  obtained from the same old suppliers , and mind you this went  on until as late as May 2018. That is , the period of the old suppliers had been invariably extended until  end of May. Owing to this bungling , by end of April alone the government had incurred a loss of Rs. 1500 million !  and that is likely to shoot up further  in May.

To cite just one  example  : The price of dhal at which the old suppliers provided the dry ration to the forces was Rs. 148.00 per kilo. Under the new market price , the suppliers say they can supply at Rs. 101.00 per kilo.

In other words there is a loss of Rs. 47.00 per kilo of dhal by purchasing this commodity from the old suppliers. This is no trivial loss because the forces require 400,000 kilos of dhal monthly meaning that the loss incurred by the government on dhal alone is about  Rs. 18.8 million   per month. Since there has been a delay of 5 months , the loss incurred on dhal alone is  Rs. 94 million!!  In this way , the government on dry rations alone has faced a loss of over Rs. 1500 million (Rs. 1.5 billion !)

Buddhika Pathirane had lodged his complaint based on charges of corruption  .

It is very unfortunate despite president Gamarala who is day in and day out speaking about the alleged bond scam , and saying ’I am against corruption’ does not know what monumental corruption and losses are ongoing  under his very nose – under his defense ministry !

It is now crystal clear why Gamarala is not transferring out the Auditor General who is the key player in the corruption despite the Public service commission insisting on that for the last  8 months.

Let it be understood , all the burdens of these losses have to be borne by the helpless and hapless people of the country  ,and not by Polonnaruwa rice mill owning brothers, bar license owning daughters or ‘commis’ sons in laws .

In the complaint of Buddhika , the other charges are : The State Janawasama  which was hitherto supplying Tea to the forces has been axed , and a private enterprise henchman has been given the contract ; and while there are more suitable boot and  shoes suppliers , another crony  had been awarded the contract .

The complaint supported with cogent evidence is contained in a 200 page document. Buddhika has also additionally lodged complaints with the FCID and the Auditor General .

The FCID has already initiated investigations and a statement is to be recorded of Buddhika M.P. this Friday.

This is the first time an investigation has been launched by the FCID into a corruption in which the ministry under the president himself is being charged with grave financial misappropriation . This is  something  unprecedented  and historical.