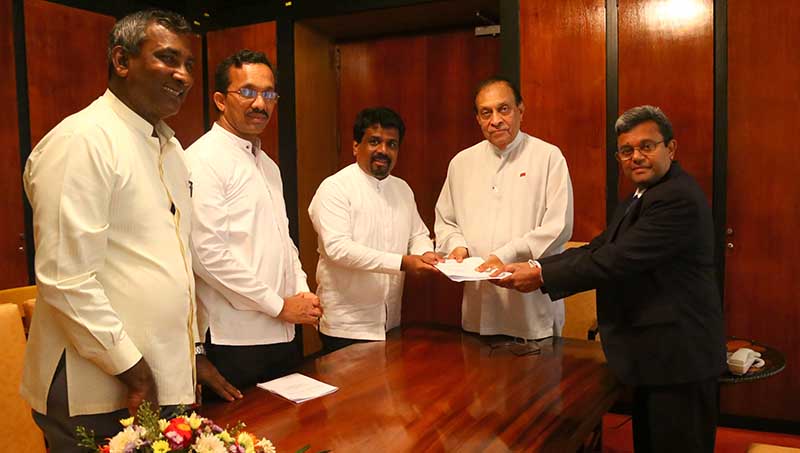 (Lanka-e-News – 27.May.2018, 3.25PM) The JVP tabled the motion pertaining to  the 20 th amendment for the abolition of executive presidency to  speaker Karu Jayasuriya and parliamentary secretary Dhammika Dissanayake  within the parliamentary complex on the 25 th at 11.15 a.m.

This was presented  as a private members’ motion  by  the JVP leader Anura Kumara Dissanayake M.P.  JVP MPs Nihal Galapathy and Sunil Handunetti too were also present on the occasion.

After this motion  is forwarded to the Attorney General’s department it will be tabled in parliament . Tamil National Alliance of the opposition , UNP,  Duminda Dissanayake’s group of the SLFP  and even the chiefs of the Lotus Bud party , namely , Mahinda Rajapakse and Basil Rajapakse have expressed their consent to this based on unofficial reports.

It is only several extremists of the group of goofs, goons and crooks including  infamous Gammanpila and Weerawansa who are against the 20 th amendment and pipe dreaming of making Gotabaya Rajapakse the president - the yankee doodle do who fled to America  during the height of the war despite being a member of the Sri  Lankan  forces and therefore should have stood by and  fought for the country . Dinesh Gunawardena  who is also in that group of villains however is in favor of the amendment , according to unofficial sources.

No matter what the two main political parties have an inescapable  huge responsibility on their shoulders  to act with prudence   giving due  consideration  to the future of the entire nation .

The people had experienced already the disasters of this obnoxious  obscure executive presidency which had only so far put on the presidential pedestal either a cruel despot or a moronic braggart . Therefore it is the general consensus , to continue this position even  for another hour is most perilous and pernicious to the country. The sooner it is abolished the better.

In the circumstances in all probability this 20 th amendment will be passed with a two third majority , and hopefully on 2020-01-08, it is a parliamentary election and not a presidential election that will be held. Thereafter a president (not an executive president) will be appointed through the parliament.

If this amendment is successful , certainly all the charges that were heaped on the JVP hitherto will crumble to dust , and they will be exonerated and acquitted of all the grave  accusations mounted against them . Specially because of their efforts on behalf of Democracy  and its perpetuation, even the ‘Wijeweera history’ will be forgotten, and shall be forgotten ,  when the people begin to sniff the true  fragrance of Democracy.