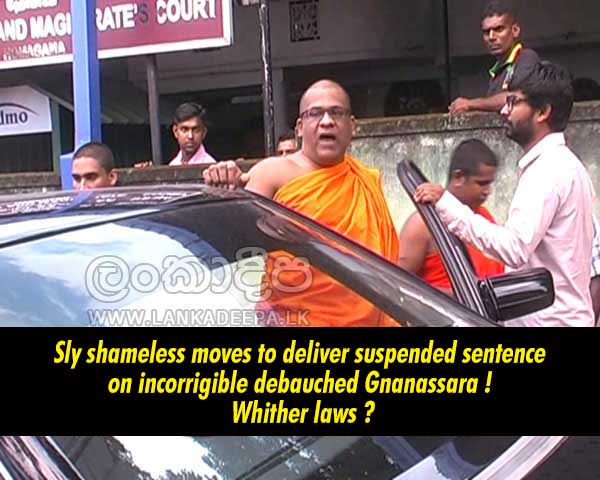 (Lanka-e-News -29.May.2018, 8.05AM)  Attempts are being made to rescue the infamous Galagoda Athe Gnanassara the hooligan monk who is charged under sections 386 and 486 of the Penal code for intimidation and criminal harassment and now found guilty . Groups of president Gamarala and several  other groups are moving heaven and earth to save the criminal rascally monk who is a scourge to society and a disgrace to Buddhist monkhood. These groups are exerting pressure to avert the sentence to be delivered on this disgraceful monk . It is owing to these dastardly moves that the sentence which was  to be delivered on him was postponed and for no other reason , based on reports reaching Lanka e news inside information division.

It is former Human Rights Commission president Pathiba Mahanama who is playing the main role providing the necessary legal advice in this conspiracy , it is reported .

Believe it or not ! This is the first time in legal history , a judge after announcing the sentence will be delivered on a particular date had changed that decision on that date to postpone the final  verdict by 20 days.

Ordinarily , the sentence is passed  on the date announced by court on the earlier date of the case , and if it is decided the accused has committed the crime , he/she is handed over (with the punishment order) to be imprisoned. If  it is alleged following the verdict that the accused has been wronged , he /she can file an appeal while the accused is in prison.

The appeal of Duminda Silva in the Baratha Lakshman case is being heard while the accused is in jail. To illustrate this point there are a plethora of cases.

In the recent case, the Homagama magistrate had given 20 more days  freedom to criminal Gnanassara who was found guilty by the same court instead of punishing him  on the due date. Much worse ! Ganassara had been provided with the necessary background to file an appeal before the 14 th of June – the day the sentence is to be delivered against him in order that he can escape from imprisonment, according  to reports reaching Lanka e News  inside information division.

Gnanassara the notorious rascally monk after coming out of court again spoke contemptuously of the court . Speaking to the media, he disparaged the courts saying, ‘ no matter what decision is delivered by the court , we shall not stop our appearing on behalf of the war heroes’

It is obvious there is no connection between the charges and guilt of his ,and the war heroes. It is therefore very clear irrespective of what punishment is meted out , he would continue with his criminal actions which the court decided as wrong. This is absolute contempt of court.

It is the view of legal experts , Gnanassara’s enunciations are tantamount  to a murderer who had been found  guilty by the court coming out and saying , he will murder some more.

If Gnanassara had stated he is filing an appeal against the verdict , that is certainly showing respect to the law , whereas Gnanassara did not  say that. Instead he insulted the courts .

Shockingly , what is happening now on the contrary is , the punishment to be meted out is going to be changed into a suspended sentence , to allow Gnanassara the rowdy robed monk to continue  committing  his crimes as usual, based on reports reaching Lanka e news inside information division.

It is only the judiciary that can safeguard its dignity .