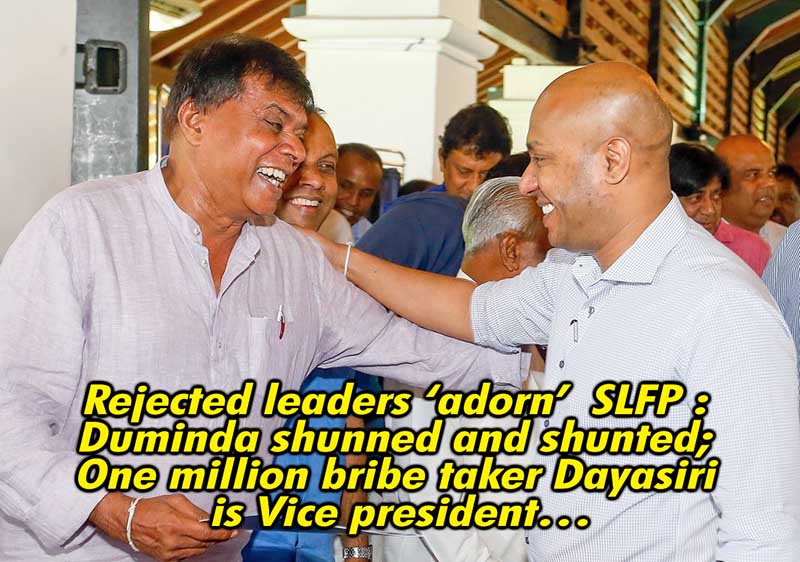 (Lanka e News – 05.June.2018, 7.45PM) It is a well known fact the SLFP party from which Pallewatte Gamarala resigned in 2015-01-08 to defeat it,   again became its leader  , and he slowly but surely  succeeded in   drastically reducing  its  popularity base from 47.5 % to a mere 4 % within just 3  years .Now the same party appointed a bizarre   new council supposedly temporary comprised of new  officers .Though the aim of this is  to boost the 4 % to 51% within a year, obviously that is like aiming to  reach the moon by  a bullock cart

Gamarala who is an epitome of ingratitude , well known for biting the hand which feeds and even eating it has chased away party gen. secretary Duminda Dissanayake who sacrificed  his entire life for the party all along. In his place Rohana Lakshman  Piyadasa a worthless useless  creator of survey reports has been appointed. Rohana a University lecturer  is the  notorious duffer cum bluffer who along with Mahinda told all the lies to defeat Gamarala . This scoundrel is such a strong pro Mahinda supporter that even after assuming the new  duties ,when addressing a media briefing he mentioned the name of Mahinda Rajapakse as president  instead of Gamarala .

S.B Dissanayake who  mounted the stage of   Mahinda on May 1st has ben made the SLFP treasurer. Chamara Sampath the uncouth brute who made a school principal (lady) to kneel down before him has been appointed as assist. Secretary , thereby demonstrating what is ‘good governance’ according to Gamarala’s Thesaurus .

The worst part ? Displaying his own true colors  Gamarala made another disgusting  (dis)appointment by making Dayasiri Jayasekera the Vice president .Gamarala who at the Sobitha Thera commemoration asked ‘ did Sobitha Thera tell to break the Central bank?’, and made insinuations  , appointed the ‘One million paga man’(One million bribe taker)  Dayasiri Jayasekera who is by now well known for taking a  bribe of Rs. 1 million from Arjun Aloysius  the corruption prince  , and therefore in panic  now like a cat on hot bricks .

It is a matter for regret , the ‘4 % popularity base SLFP’ of Gamarala did not at least have the decency to avoid giving appointments to those who are facing criminal charges  before the civilized society.

It can be inferred from this , Pallewatte Gamaralas have no vision , mission or  program   for the SLFP, or a group  to carry on without the  Rajapakses . Hence the next political avenue open to them is stop the good governance  empty  rhetoric, throw that into dustbin and with the 4 % popularity halt at the corrupt and murderous Rajapakses’ terminus.

When the SLFP Samastha Lanka working committee and executive committee met on the  3rd  chaired by Gamarala at  Apegama, Battaramulla the following were temporarily appointed to the so called new officers council

The former president and former prime ministers , Chandrika, Mahinda and Dimu were re appointed as advisors. However Chandrika was in London while Mahinda was with his  unique blossoming -wilting  flower bud .