Lanka ‘s media freedom fiend struggling to ban internet media ; orders intelligence division to give list of those criticizing him !! 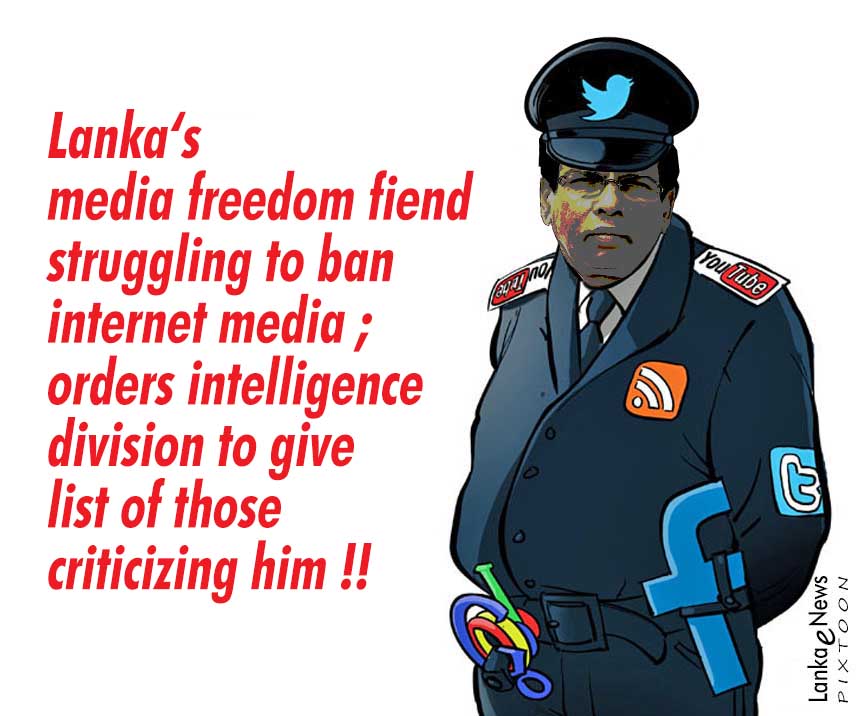 (Lanka e News -16.June.2018, 11.45PM)  President  Pallewatte Gamarala has ordered the State intelligence division to prepare  a list of the news websites and  face book pages which are criticizing him , and to forward that list to him.  President’s media lackeys and coolies have already assessed that there are about 200 of them.

It was Lanka e News website which for the first time introduced the Sinhala on line media tradition in 2005. Sadly however Gamarala banned this very website twice. Thereafter so far he has banned (unofficially) through the TRC whose chairman is his younger brother another four websites which were criticizing him .

This ban has imposed in a queer manner in keeping with the weird ways and lunacy  of the president. That is the websites are blocked for two hours , and then for about 15 to  20 mins. the ban is suspended. Therefore the owners of the websites find it difficult to  decide whether this is a ban or a collapse in the service  .

After the Intelligence service provides the list to the president about 200 websites and face book pages can be completely or permanently banned.

Truly , the bans are to be imposed on pro UNF and pro Rajapakse websites leaving out the existing websites of Shiral Lakthileke , Rakitha Rajapakse and Ruwan Ferdinands who are with Gamarala and mini websites  which are living off monies provided by them .

Pallewatte Gamarala who  is by now manifesting all the symptoms of a mental disorder and in desperate straits clinging to a 4% popularity base , is now getting ready to also take over the role of stoning the media to death  while hoping to face the next presidential election .

Already Gamarala has hit below the belt of Lanka e News, CSN and TNL . It is most unfortunate some media coolies who shouted and screamed during the Rajapakse decade against media suppression are now deaf , dumb and blind after creeping into the stinking area covered by the  loin cloth of Gamarala . They are unable to speak and are remaining like beaten dogs after thrusting their tails between their legs.

President Gamarala who was propelled to the presidential chair because of the internet media is leaving no stone unturned to ban the same  internet media.  Therefore the president is going to destroy himself in the very fire out of which he was created  ,’ warned Dallas Alahaperuma.

The UNP which talks most vociferously in favor of media freedom remaining paralyzed and  silent after only saying it does not approve of Gamarala’s media bans , without taking any further action is most regrettable and reprehensible.