Gnanassara himself says ‘court did its duties duly’ then why are piles of others bleeding? President’s advisor Ulapone ‘s underhand machinations exposed ! 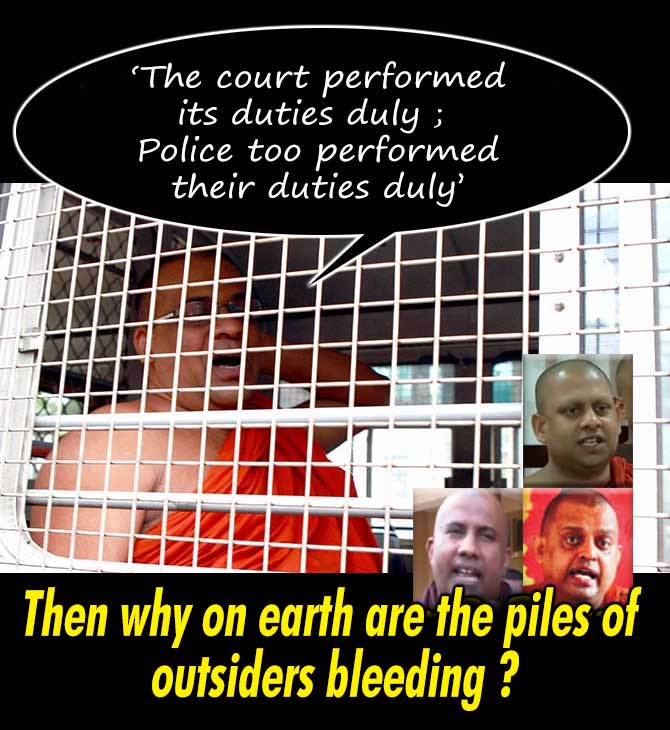 (Lanka e News -17.June.2018, 11.45PM) It is a well and widely known fact it is none other than Gnanassara the hooligan robed monk who instead of respecting the sacred saffron robe he is wearing ,the  Buddhist teachings he is supposed to be following and without maintaining  the dignity of his  monkhood , has been  viciously abusing and threatening the complainants, sacred courts ,judges  and  state counsels ,in addition to destroying the Buddha sasana ,  trampling the laws of the country by behaving like a most detested rowdy within courts committed crimes including  contempt of court. It is this  shameless scoundrel of a monk who was sentenced to jail after hearing a  case for two long years based on a number of criminal charges  filed against him.

While this is the disgraceful scenario created by this criminal monk , yet shockingly  by now it has come to light it is Ulapone Sumangala another robed monk who is an advisor to the  president of all people  who is      moving heaven and earth to insult the judgment that was delivered by a sublime law court  , by putting this rascally monk Gnanassara even above Lord Buddha and thereby disgracing even pristine Buddhism . It is  learnt that this Ulapone  Sumanagala is openly engaging in these  dastardly activities with the knowledge and consent of the president , and it is the latter who had entrusted Ulapone with the task of creating the necessary environment to grant Gnanassara the criminal monk  a presidential pardon.

Gnanassara is not the first ….

Gnanassara is not the first robed monk who was jailed for violating the laws. Gnanassara is not just an ordinary robed thug because even before he had been charged with driving a  lorry without license under the influence of liquor and running over a three wheeler . This debauched disgraceful monk was arrested and was fined when he pleaded guilty in  court.

What’s more !while wearing the saffron robe this shameless  monk had a sexual relationship with a woman , and has a child by her. His debauchery and sex starvation are not issues if Gnanassara was indulging in those without  exploiting his monkhood or gobbling free food.  But of  course it is an issue if he is using the sacred saffron robes to wipe out the spills after his thrills despite being a monk..

Any way before Gnanassara  there were monks who were handcuffed and incarcerated , the most well known  among them were Thalduwe  Somarama and Mapitigama Buddharakitha .But of course Buddharakitha was the chief prelate of  Kelaniya raja mahavihara unlike Gnanassara who is a two penny half penny debauched  dipsomaniac self degrading monk  .It is a fact that   after being  found guilty by the court they were all  disrobed and were made to wear the jumper which is the dress of sentenced prisoners.

The law itself has ensured this in order  to give  respect to the Buddhist robe  , and for no other reason. A robed monk performing rigorous tasks under rigorous imprisonment is indeed  an insult to the sacred robe.

However , it must be emphatically stated , the  Buddhist robe is not a  license to violate the country’s penal code. If the penal code was  violated , any religious priest whether he is a Buddhist , Hindu , Christian or Muslim he / she is  liable to punishment , and had  been jailed in SL. Mathew Peiris is an example.

How come Ulapone who spoke of enthroning law is now against it ?

It is the presidential  advisor Ulapone who while distorting the truths said, this is the  ‘warring period of religion’ and that laws shall be enthroned addressing media briefings after forming a so called Anti corruption front . He is the same hypocrite who made fiery speeches   in front of the  mike. He is the  same Ualpone who was most vociferous that laws shall be upheld is now threatening to take to the streets on the 18 th on behalf of notorious criminal Gnanassara who was sentenced for contempt of court and other criminal involvements under those same laws . Double tongued double faced Ulapone is  therefore duping the people and discrediting  the judiciary .

Believe it or not Ulapone is the advisor to the president ,of all people , who  while Gnanassara was unlawfully  dodging the  courts took Gnanassara to  court and got him released on bail in five criminal cases in one day.  After the communal violence in Kandy when president Gamarala took Gnanassara to Japan , Ulapone too accompanied him. Now what Ulapone is trying to do is create a fake scene of riots to get a presidential pardon for Gnanassara while also whitewashing Gamarala’s behind the scene crooked  maneuvers .

Gnanassara has not told he would not remove his robe

he is well accustomed to stripping himself of it ( even in public) .  The issue is therefore not with Gnanassara who is inside  but with Ulapones and Medagodas who are outside and suffering from bleeding piles . When  Gnanassara was being taken to prison he  said  , ‘ the court performed its duties duly , and the police performed their duties duly.’ In fact in respect of Gnanassara , even to file an appeal is  incorrect  because Gnanassara himself  admitted  categorically the court had carried out its duties correctly.

Based on reports Gnanassara has not said he would not remove his robes within prison .The prison officials too  told the media on the 16 th  he has undertaken his prison tasks  peacefully under the terms of rigorous imprisonment .

Gnanassara is an individual well accustomed to readily removing his robes to wear  trousers and shirt . When he goes to France to meet his wife or when she comes to Sri Lanka he does his secret jaunts and ‘ jumps’ wearing shirt and trousers. Therefore to him removing the robe which has  no sacred value as far as  he is concerned  , and wearing the jumper is as  simple as putting a ‘jump’  . Hence the genuine monks are not surprised when Gnanassara after removing his robe wears the jumper and eats hirabath  ( serves jail sentence ). Lanka e news has already published photographs depicting how the BBS members – the Gnanassara lackeys gourmandize  inside the prison.

Already exposures have been made with cogent and copious evidence about ‘Kiri Vehera koba’ ( Kiri Vehera womanizer) alias local Don Juan who chases  women on the sly  after removing his robe and donning trousers and shirt  to cure his itch in the wrong place . Hence Medagoda should now answer whether Gnanassara ‘s robe should be removed or not . If truly the religious disciplinary code is followed duly , not only Medagoda’s but even the robes of Mahanayakes would have been removed long ago.

If an appeal has been filed lawfully against the decision of the magistrate court , it is for the president of the country to  see to it the laws are enforced duly and put a full stop to  his advisors from  becoming  ‘madvisors’ taking the law into their hands to the detriment of the entire country.  If such steps are not taken the fact that Ulapones are undoubtedly conducting  themselves this unlawfully and unethically  with the consent and knowledge of the president  cannot be hidden from the people

It is very evident the plan of the president and his close sidekicks currently is to fasten all their misdeeds and wrongdoings on the UNF faction , while whitewashing the president and getting the SLFP out from the consensual government . It is obvious even monk Gnanassara’s self degrading disgraceful episode of his  jail sentence is going to be exploited to achieve such an end based on the conduct of the advisor to the president .