Medamulana Gota the ‘Chinese Sales propagandist’ , his election activities and his American beauty… 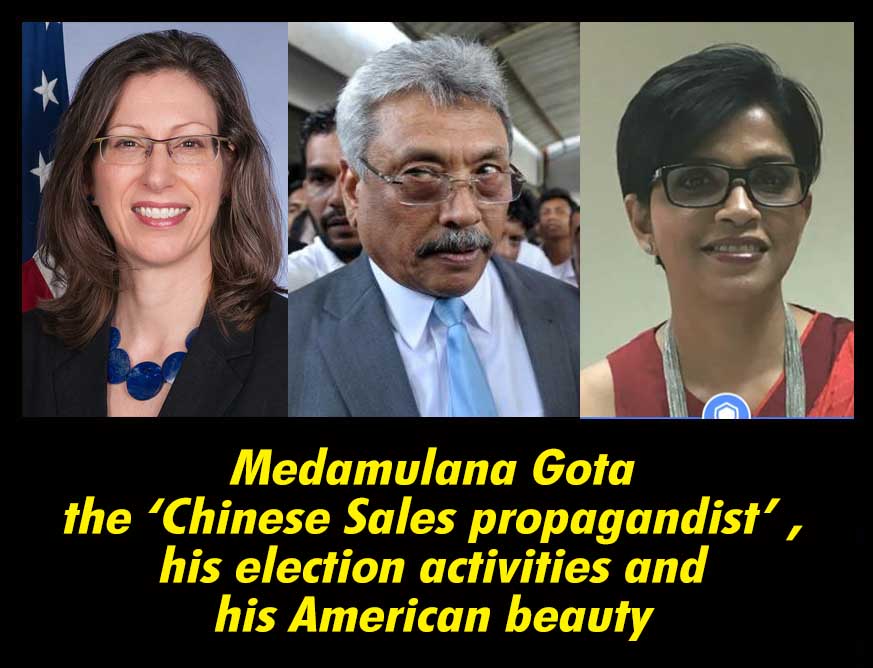 (Lanka e News -18.June.2018, 11.45PM) US ambassador Athul Keshap left for America after his term ended and the  notification reveals the vacancy arising there-from has been filled by AlainaTeplitz the former US ambassador to Nepal .

This appointment has received the approval of the US Senate and Trump has signed it. Going by her history it is apparent America is sending an ambassador  who can more than match  the Chinese ambassador in  S.L. If she is not entrusted with tasks even  beyond her diplomatic duties , it is a matter for  surprise. Her duties being to build a geopolitical opposition along with India to counter China , it is to  be expected that she will be controlling  the political factors in SL in consonance  with that   objective.

In September 2015 , under the leadership of Kaga Prasad Sharma Oli the president of Nepal’s Communist party , a new constitution was propelled forward.  Under that constitution Nepal which was until then a religious state was proclaimed as  a non religious Federal State .It is worthy of note   , China  was  behind the formulation of the new constitution . India construed  this as a powerful clandestine maneuver  targeting India. In 2015 October Sharma Oli became prime Minister on a majority vote.

Soon after that he signed 9 huge projects with China. It is during that period AlainaTeplitz  received the appointment as the new Ambassador to Nepal. Since the day Alaina assumed duties she worked very closely with the  foreign affairs ministry of India which is  more powerful than the Nepal government in the region.

When an Internal Front in Nepal was launched with Indian support against China , it cannot be said , her blessings were not there. By July 2016 , the Nepal Internal  Front via  a no confidence motion in parliament succeeded to ‘paralyze’ Sharma Oli.

Alaina made a huge contribution towards completely  halting  the hurtling down of  Nepal in the direction of  China .By the time she was leaving Nepal her  name was included  among those who saved Nepal from the clutches of China .

Evolution of Kings in SL history..

Based on the historical records   relating to  Sri Lankan  Kings and their lineage  , never has anybody become a king without the blessings of India. If there arose a king otherwise  , the King’s  brother had captured the kingdom  after going to India and returning with an army.

After independence in 1948 , until 2015-01-08 , India had played a decisive  role when enthroning  Kings in SL.  No matter who says what , India is  the only refuge and not anything else for SL’s internal forces .  Irrespective of whether the country  is a nerve center economically or politically , it is rarely China had intervened in the enthronement  of rulers.

It is China’s policy to put through deals with the government that is appointed. During the Indo – China war , Sirimavo intervened as an advocate of peace, and it is  well known Sirimavo’s  moves were in favor of China. However after J.R. Jayawardena was installed in power in 1977 , China which strengthened its relationship with him , let down the Bandaranaikes , its historical friends unconscionably.

The two main organizations relied upon by Gotabaya under his presidency steeped  in crookedness and scandals   are “Viyath Maga’ and ‘Eliya’ .Gotabaya representing these organizations  is going around the country and addressing the people. Yet , in the process Gotabaya demonstrated that he is more a Medamulana ‘sales propagandist ’ of China and less a politician  who can address  the local  people  .

‘China will be  a world economic power overriding America’ is a line in  the baila  sung by Gota the American citizen wherever he goes. Gota  apart from making such speeches also creeps into  China frequently  without a schedule or any  known reason.

Though Gotabaya conducts himself this despicably and self degradingly even stripping nude  before China , the other candidates on the contrary  do not stoop to do  the sordid biddings of other countries.  Gota who is under oath as an American citizen not incurring the resentment of America in the circumstances is  a matter for surprise. This  peacock dance of toffee nosed Gota is only provoking the fury and wrath  of  US and India , and he  is only  voluntarily inviting trouble.

No matter what government comes to power in SL , China gets its work done. It is the condom theory China applies to whatever government in power. Wittingly or unwittingly Gotabaya has fallen prey to this theory. Gota is now only an exhibit of China. Poor  Sirisena who is an absolute ignoramus when it comes to geopolitics , is providing fuel stealthily to Gota who is  on the sure  road to perdition.

Gota attended the 2015-2016 security conference at  a diplomatic level and visited  China after obtaining permission from court temporarily to travel because a ban operated on his foreign travel . Instead of embarking on this tour silently , Gota made a  huge din about it.  After that he went to the Red Army Defence University for a month’s   in house training  provided with lodging.

Making a roof before the walls are constructed…

The dance recital Gotabaya performed with China were watched by America  and India silently hitherto , but now that has come to an end. Alaina the new ambassador appointed by Trump is arriving in Colombo to prepare the necessary geopolitical ground.

Mahinda Rajapakse  recently met with Alaina’s predecessor Athul Keshap   who has now  left SL. At that meeting inquiries were made regarding the application made by Gotabaya to revoke his US citizenship . Keshap replied , that does not come within his purview .If  Keshap a friend had treated the request with such disdain ,how  Alaina would respond is a  foregone conclusion.

Sadly , Gotabaya and his think tank subordinates were trying to make a  roof before building the walls. While speaking about the American  frame he has now  fallen down  behind the Mahanayakes. His attempts to circumvent the 19 th amendment has also not received  the support of Sirisena he expected .

Those who rally around ‘Viyath maga’ and ‘Eliya’ organizations are those who vomit  on  the very  rice plates  they ate from . The military set including Kamal Gunaratne who is the ‘thailaya’ (oil) for all illnesses is  holding discussions to launch another organization under the name ‘Harimaga’

Gotabaya’s idle supporters are not second to the cooks who know only to spoil the soup . From  Gotabaya’s American beauty Manori Unambuwage to Nandikadal ‘hero’ , all of them are such cooks   who can do nothing worthy to themselves or others. They have all outlived their utility on earth.

Throughout the whole Ramazan period Gotabaya was struggling to  lure  the Muslim population.

With the commencement of the Ramazan fast the facebook of Gotabaya was abounding with pictures of Beruwala Ifthar  parties. Towards the end of the Fasting period   countless pictures  of Ramazan Ifthar parties at Galle Face and a number of Muslim functions were displayed. Among those was also an article that relationship with Israel will be severed . These are  classic examples of hypocrisy and sanctimonious humbugging . It is simply  thinking nothing but evil while doing nothing but  lip service to dupe all. The responsibility of handling the mass media and social media had been entrusted to Manori Unambuwa the beauty imported by Gotabaya  from America.