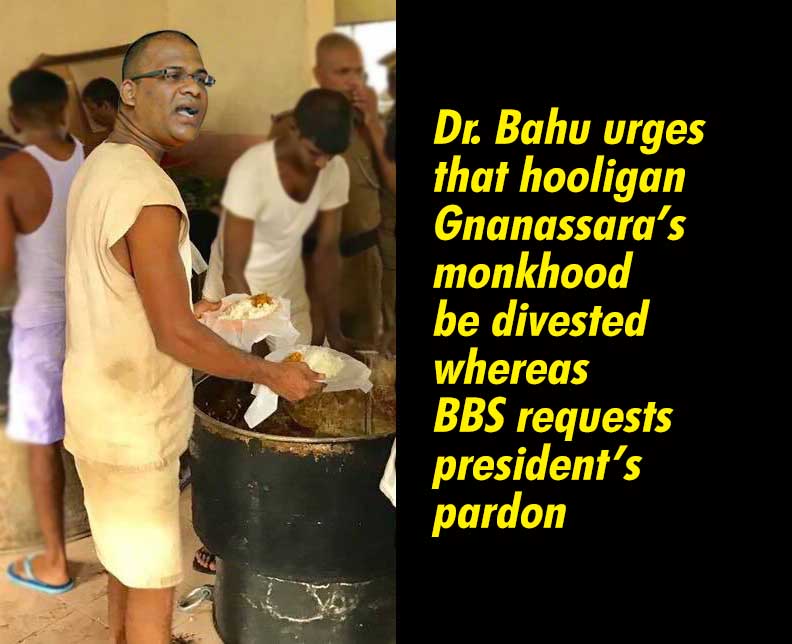 (Lanka e News -18.June.2018, 11.45PM)  Gnanassara must compulsorily wear the ‘jumper’ (jail dress) and serve the jail sentence ,  the nikaya prelates should divest him of the monkhood, and Gnanassara  must be made to start from the beginning in the order , that is from Samanera position and reach monkhood again , said Dr. Wickremebahu Karunaratne .The latter made these comments to the ‘Rights’ magazine which espouses the cause  of human rights.

‘The court without surrendering to any pressures dispensing  justice  should be admired.

This is testimony that the country’s laws are in motion  on the right track , and those who are stoking racism and religious hatred are being treated as vicious brutes.

Specially Sandya and her two children were in  dire straits and when earnestly seeking redress for her unbearable woes through country ‘s judicial system she faced untold hardships . To such a desperate lady ,the criminal embarrassment and harassment caused by a bhikkhu is most despicable and detestable. Such a hooligan bhikkhu  is not worthy of his monkhood. He must be made a real prisoner. It is my conviction  the Nikaya prelates would take a right decision and divest him of his monkhood . He must wear the’jumper’ . He must wear the ‘jumper’ and  serve the rigorous imprisonment .’

Meanwhile Gnanassara who is by now well noted as a disgrace to the monkhood  and a menace to decent law abiding society has filed an appeal in the Homagama high court against the decision on the 14 th.  At the same time another extremist monk Magalkande Sudantha of the same ilk as Gnanassara addressing a media briefing on the 14 th made a request to  the president to grant a pardon to Gnanassara.

Amnesty International issuing a communique had stated the sentence of one year rigorous imprisonment delivered on Gnanassara is a victory for the human rights protectors of Sri Lanka .