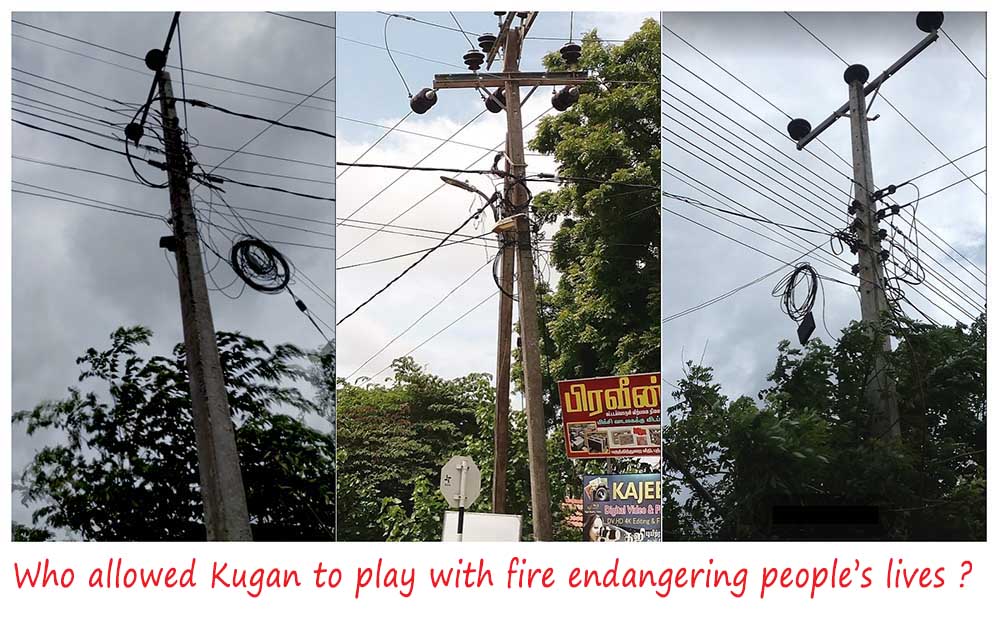 (Lanka e News -20.June.2018, 7.00AM) While President Pallewatte Gamarala is shouting and screaming with all his might from roof tops about the Treasury bond losses,  the Attorney General on the other hand  told court the loss due to the bond scam is Rs. 688 million while also revealing  that former Telecom Regulatory Commission Director General Anusha Pelpita was sentenced to jail for causing  a loss of Rs. 600 million to the TRC  in connection with distribution of Sil Cloths during the Rajapakse corrupt nefarious decade, and the TNL of Shan Wickremesinghe was sealed for non payment of a small license fee.

Meanwhile the blue brigand rogue cum president’s henchman had cheated the TRC in a sum of Rs. 3000 million ! without paying the dues for five long years , yet he has been allowed to carry on his TV channel services without let or hindrance. When it was probed why this racketeer is given this  special   concession it was  discovered , this crook is Gamarala’s  coordinating secretary,  Jaffna . His name is A.S.Kuganathan , and he runs a television channel via cable network  under the name of A.S.K. Cable vision .  He obtained a license from TRC in 2013 but  he is carrying on the business violating the television channel’s  terms and conditions.

The conditions for issue of TV license stipulates separate licenses shall be obtained for every new center that is established in addition to licenses issued to one  main station which carries out the television service as well as the signal station. However  , this Jaffna coordinating secretary of the president has been running several separate main stations in Chilaw, Mannar, Trincomalee, Mulaitivu, Batticaloa, Kalmunai, Hatton , Kadawatha and Kotahena without obtaining separate  licenses in accordance with the requirement  stipulated above.

There is no establishment from which the telecommunication  equipments were purchased or any record that those have been legally imported . All those are robbed goods.

Hence, under whose patronage did the henchman of president Gamarala carry on the illegal television channel service , and who gave the permission ?

In addition this President’s henchman is a tax evading rogue….

Shockingly , it is the coordinating secretary of the president Kuganathan of all people who has not paid these taxes !

Based on his own revelations and his actual  number of viewers  , he must then pay at least a sum of Rs. 50 million as taxes monthly .(Taking Rs. 450.00  as the average monthly installment ), whereas he has paid a paltry sum only in respect of  3500 viewers. If the tax he has to pay to the government is computed on the basis of Rs. 50 million per month , the sum he has to pay to the government for the last  5 years is a whopping Rs. 3000 million ! That is president’s coordinating secretary has cheated the government under  the president himself  in a sum of Rs. 3000 million. What an irony !

What fraction  of this Rs. 3000 million  the government was deprived of went to line the pockets of Gamarala ( the  kickback  that enabled the  culprit to escape) will only be known if and when it becomes possible to seize  another Gamarala’s chief of staff when counting the bribery amount in another car park.

These are routine open robberies of the Blue brigand rogues. What’s more ! in addition Kugan  had outrageously violated the laws taking advantage of the president’s patronage he enjoys. .

As far as we know , nobody can use the posts belonging to the Electricity Board to fix their wires because those are  owned by the Board. But to Kuganathan those laws don’t apply, and he doesn’t care two hoots for them , for  in Jaffna , Mannar     and Hatton where his cable TV channels  are telecast  it is the Electricity Board posts which have been used to  support his  cables

Needless to say this is most dangerous . In Jaffna because one of the cables caught fire two houses were burnt down. Even after this destruction there is no powerful being to intervene and avert the unlawful actions of Kuganathan . Naturally this is because Kuganathan is the Jaffna coordinating secretary of the president , the highest in the hierarchy and who is expected to safeguard laws and the country as a whole.

Abeywardena a resident of Ratmalana has lodged a complaint with the CID with evidence  pertaining to the corrupt activities of Kuganathan .

The CID had told the complainant  since this is not a criminal charge  , it has forwarded its investigation  report to the relevant Institutions which are empowered to take action in this regard. The question is what are the Institutions which have the powers ? These Institutions are the TRC under the president and the mass  media ministry .

Handing over the investigation to the TRC under Gamarala is tantamount to entrusting the case to the rogue himself or his mother to deliver a verdict. The mass media ministry under Mangala is a dead loss. As Mangala is also the finance minister this probe into this tax fraud  comes  under his purview . The CID had handed over the case to the mass media ministry and the TRC as far back as  16 th February, yet no investigations have been initiated so far . The relevant documents  are hereunder … 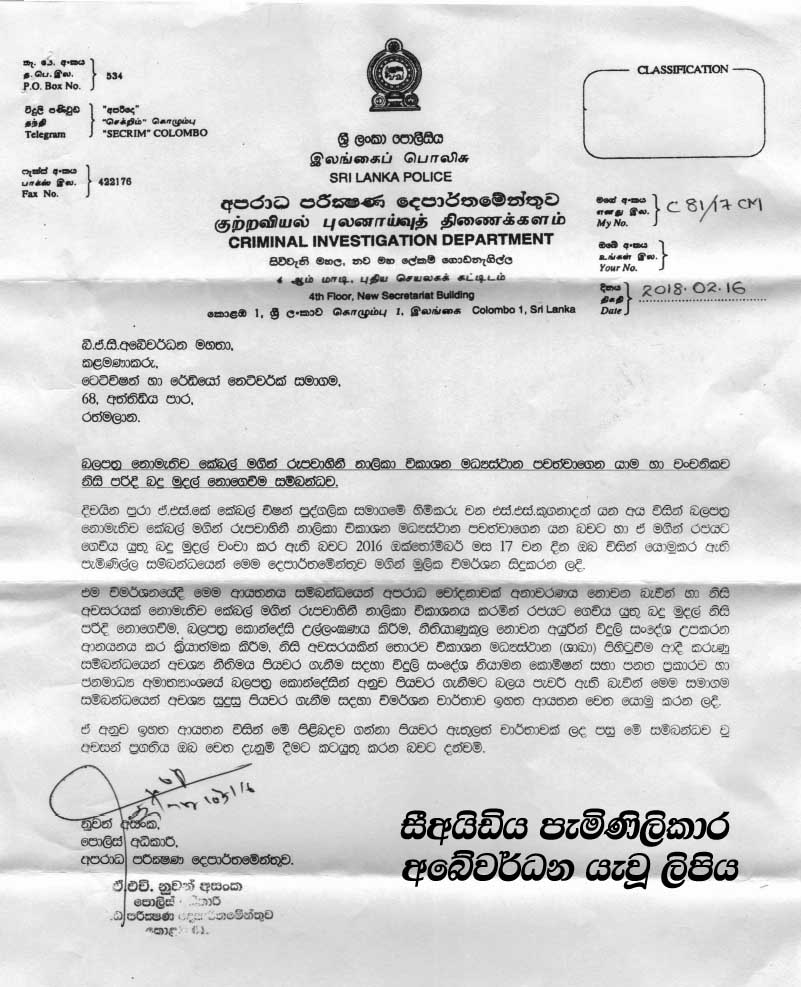 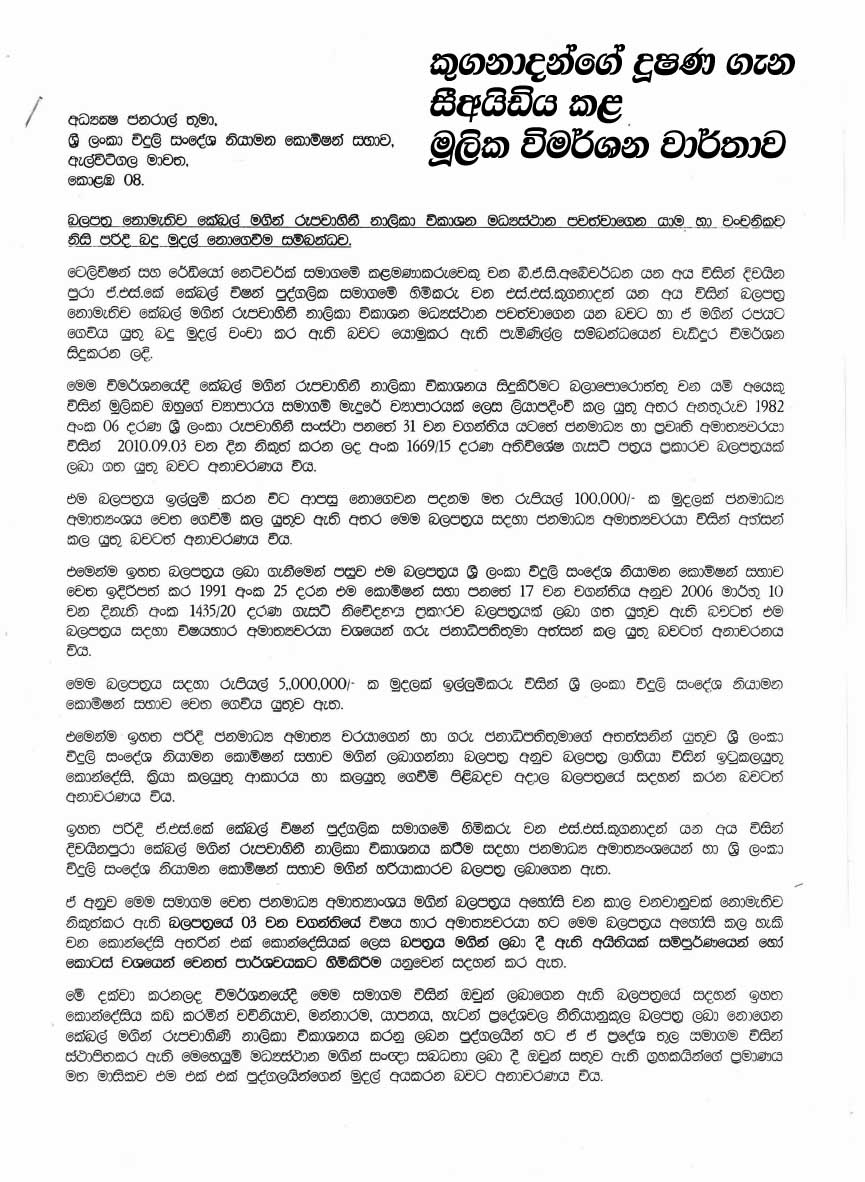 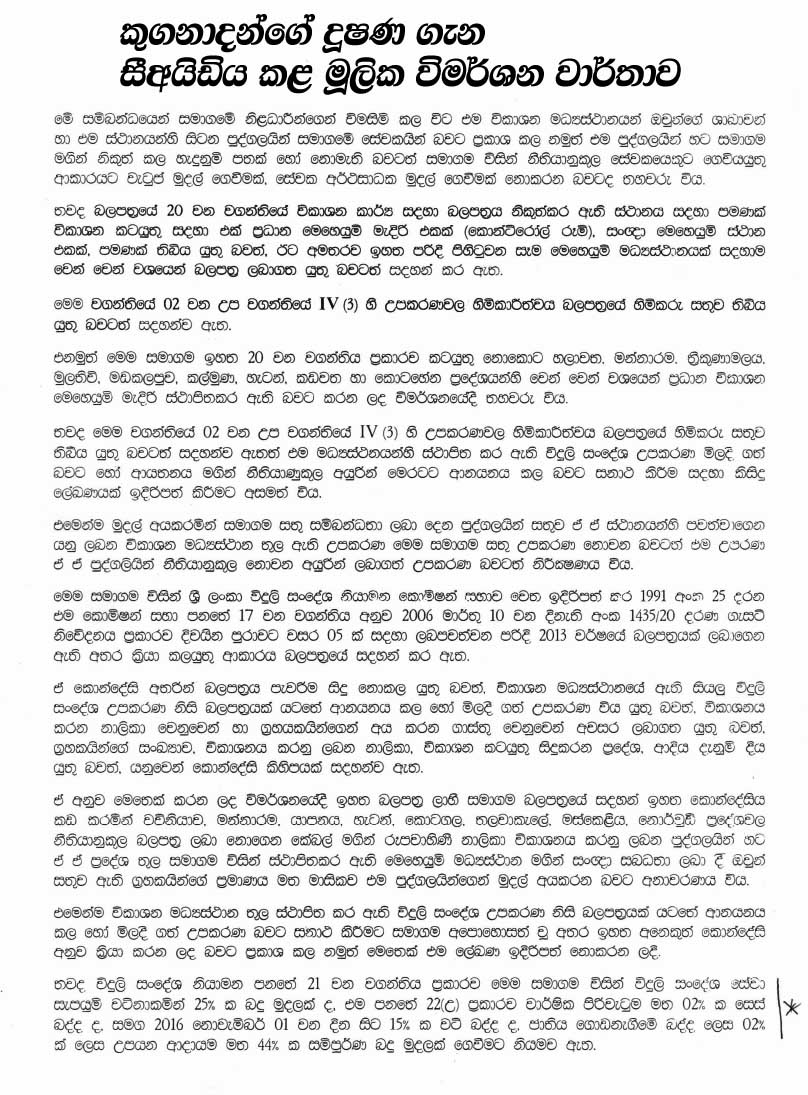 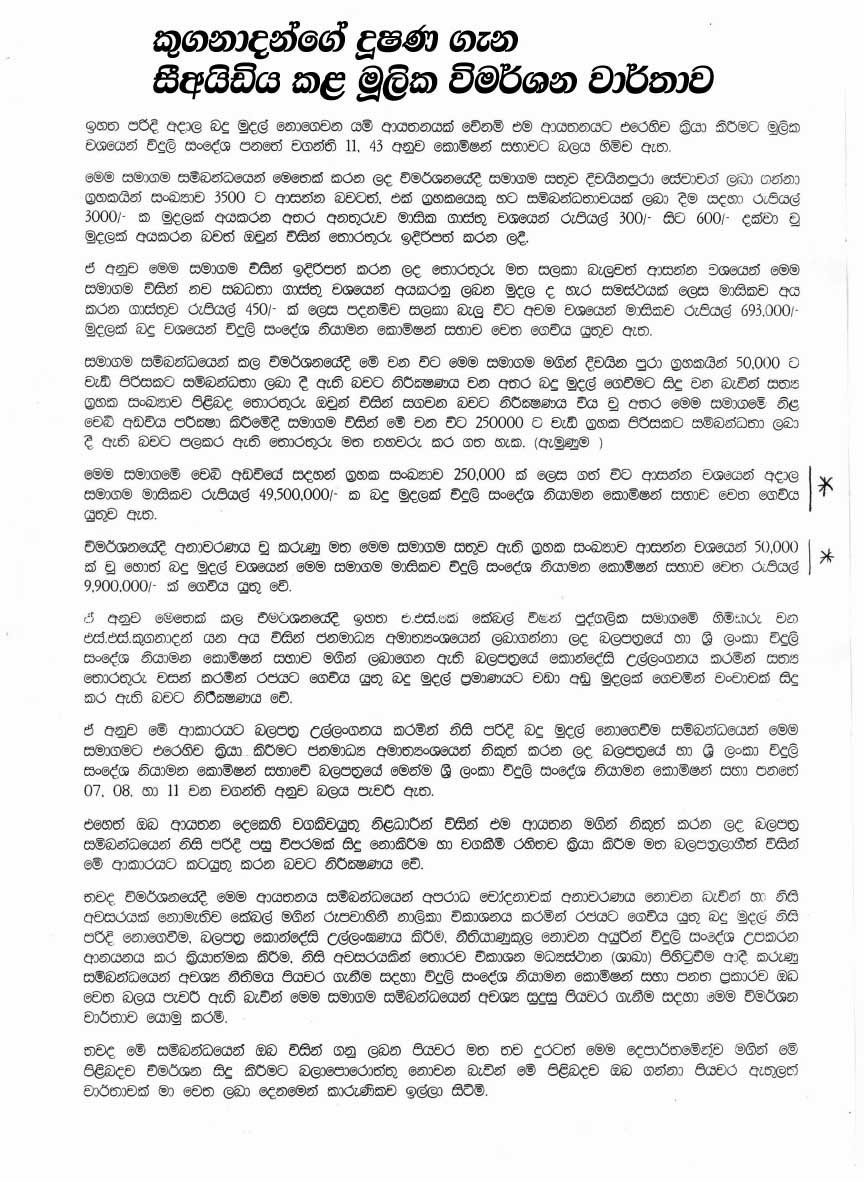