Bungler Gamarala and his defense secretary who farts around make a hash of everything ! Secretary and additional secretaries on collision course ! 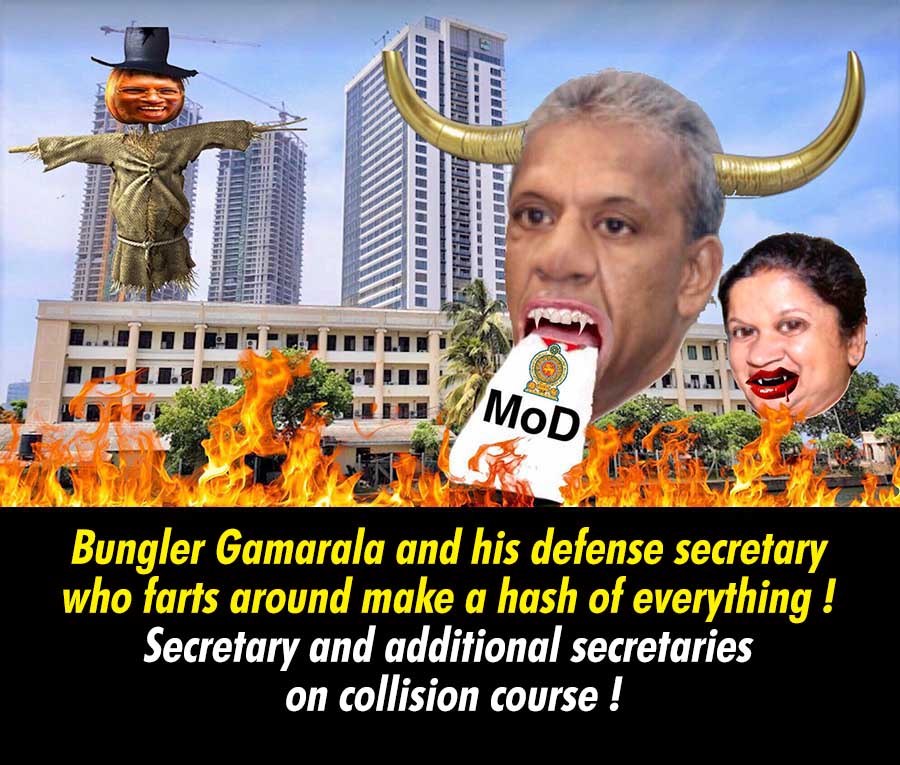 (Lanka e News -22.June.2018, 7.00AM)  President Gamarala recently said , irrespective of what load of work he has , he goes  to bed by 10.30 p.m.  whereas  his daughter in the book ‘my president father’ had stated , on days he has a lot of work he works until dawn , and wakes up again in the morning meaning that either Gamarala is lying or his daughter is telling lies. If not , the book has been written by another father’s daughter.

While Alzheimer’s disease afflicted Gamarala is wreaking havoc day in and day out ,  Kapila Waidyaratne who was appointed as the defense secretary is also playing merry hell ,consequent upon which  both the defense ministry and the country are being  fast plunged into doom and gloom.

Here are the facts…

In the scheme of things when performing  ordinary administrative duties, the superior officer trusts the inferior officer and safeguards  him. Hence the relevant  files , requests etc. that are  sent to the president , ministries ,the three forces, the Institution chiefs ,  Public service commission and departments are with  the signature of the secretary.

Additional secretaries who have to stand near his door for 4 hours or more !

There are four SL administrative service special grade officers and an engineer under defense secretary Kapila  Waidyaratne , and it is 11 months since he assumed duties ( took up duties on 2017-07-04) , yet he has  no faith in any of the officers in the ministry. Consequently , all the additional secretaries , senior assistant secretaries , assist. secretaries , and directors are utterly disillusioned and disgruntled.

In addition , the additional secretaries have to spend 3 to 4 hours of their time ( of their 8 hours duty time) that is half the day standing idle  near the door of the defense secretary to get his signature or approval for an official document . This is a common sight in the ministry now . Even then they are not called in by the secretary , with the result  they have to go back with their task unattended. Owing to this attitude , the defense  ministry activities have all gone awry and come to a grinding halt  during last year. In short the ministry is in an utter mess.

The bungler who comes to work at court starting time ,  pays floral tributes and then  begins his farting around…

The defense secretary who was a lawyer arrives daily at 10.00 a.m.- the time courts begin . By the time he finishes his paying homage to the deity it is 11.00 a.m. Thereafter he commences work by carefully examining the files that are on the table  for two to three hours. If an additional secretary appears , he is not allowed to come into his  office  and explain the   necessity because he is distrusted. .

Though it is 11 months since the defense secretary took over duties , because of the atmosphere of mistrust , discord, and lop sided administration , there is a huge backlog of   files which should have been  dispatched to the presidential secretariat , prime minister’s office and ministries . Those are languishing in dusty corners. This had most adversely affected the president himself. . The files which ought to be sent to the president’s office specially cabinet papers , research and state defense affairs documents are delayed inordinately .

The 4 additional secretaries are abused  and chased away…

Owing to these reasons , there is a lot of resentment and disappointment within the defense ministry. Last week on the 12 th with a view  to defuse the situation , the four additional secretaries (security/administration / parliament/ civil) have gone  and met the defense secretary , and explained their difficulties they are facing because of his attitude  when performing their duties . They have highlighted his lack of trust in them , failing to safeguard  them and  sending anonymous letters direct to the Bribery Commission . The toffee nosed secretary due to his characteristic aggressiveness, inefficiency and  intolerance he has chased away the additional secretaries from his office. He had also berated them severely and warned them he would get them ousted from their posts immediately by complaining to the president.

No other ministry secretary conducts  himself  this foolishly. They trust their subordinates specially the additional secretaries. But this weda  beri ( incapable) secretary is always angry with the additional secretaries who are more capable,   and is  full of venom and vengeance against them . Owing to this,  the defense ministry  which must forge ahead is on the reverse gear and hurtling down at breakneck speed.