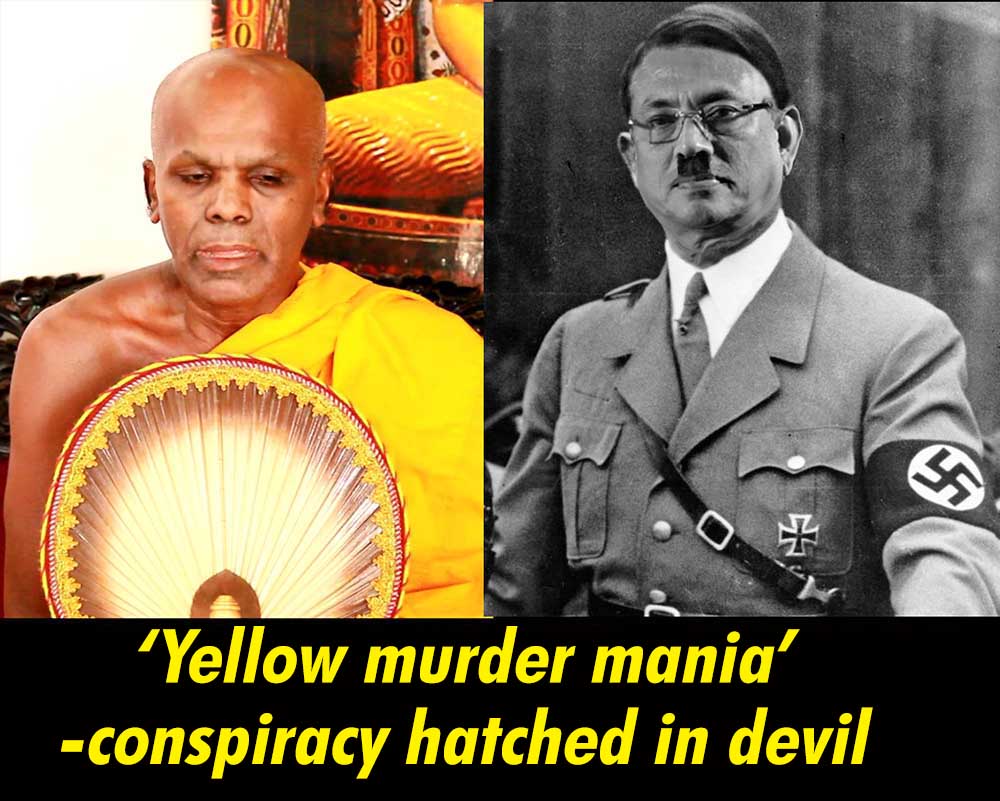 (Lanka e News -24.June.2018, 11.25PM)  A ‘yellow murder mania’ which is a challenge to laws , justice and pristine Buddhism  is most  dangerously rearing its monstrous head across the entire country. This  group of blood lusty yellow monsters  under the pretext of helping  the hooligan monk  Gnanassara who was in jail  wearing the ’jumper’ met at the residence of Gotabaya the devil incarnate most stealthily and conspiratorially. This most dangerous  mad contagion  is being spread by Asgiriya chapter Anunayake (deputy prelate ) , a robed monk by the name of Upali.

This mad maniacal monk despite wearing the sacred saffron robe and professing to follow Lord Buddha the prince of peace and non violence  had shockingly preached to Gotabaya to become another  Hitler  the demented dictator who directly killed 11 million people within the torture chamber  and  murdered 26.5 million people directly during the war in Europe alone. This was the advice given by this mad monk to blood lusty Gotabaya the murderer on his 69 th birthday after gourmandizing  at the  dhana given to monks. . It is a pity this monk while preaching Buddhism  hasn’t the mental capacity to understand   this is the Hitler he  is extolling and exalting as a model to follow (and above Lord Buddha) who earned the wrath and displeasure of the entire modern civilized society  .

Unbelievably this was the satanic  sermon delivered at the birthday celebration   of the devil incarnate Gotabaya the most notorious criminal  by another devil’s disciple  in saffron robe. Both being blood lusty vampires , both enjoyed the birthday party on this birthday message which ruthlessly encouraged a blood bath in the country. The demented monk further advised the devil incarnate Gota to become another Hitler and run a military administration.

It is the consensus of all, such requests can be made only by an insane  individual and not one who is sane and in his senses. Hence , before this country is plunged into a blood bath by the ‘yellow murder mania’, it is for the sane and sensible rulers, true sons of Buddhism  and civilized citizens  to take urgent and  crucial decisions to avert the imminent blood bath and holocaust .