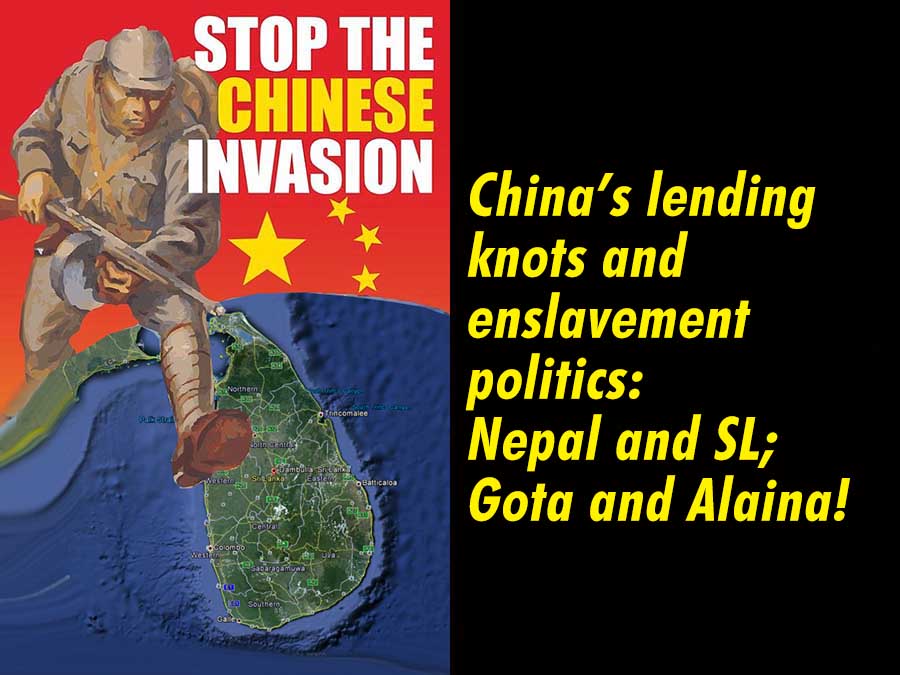 (Lanka e News -26.June.2018, 6.00AM) When an individual is unable to make ends meet – that is, unable  to cut the coat according to the cloth or his income match  the expenditure ,the latest fad is borrowing. It is a well known fact , a  number of conditions have to be satisfied if a loan is to be taken from a bank. However on high interest terms   , a loan can be taken from a village usurer (loan shark) easily at prohibitive interest rates-the  borrower can keep a deed or even ear rings as a guarantee and obtain a huge  loan most swiftly..

Why take a loan  ? How is it going to be repaid?  don’t concern the borrower at that moment . Many usurers of course are happy when loan payments  are defaulted .This is because when the loan is unpaid ,the lender can get ownership of the property , land etc . including the borrower’s wife .

There are countless defaulters  who have fallen into the traps of usurers among us. There are many megalomaniac ‘show offs’ too among us who have fallen prey to leasing Companies after making a hash of their lease contracts.  Let us warn it is however impossible  for  those who indulge in fake ostentation to escape the mockery they will have to face of the people .

The infamous pedigree of China the usurer and exploiter…

There are many countries   in the geopolitical arena who have gone bankrupt by borrowing on prohibitive interest. Today , in that list of countries ,Sri Lanka is at the top.

China figures prominently in the theme of conversation of everybody  when it is about ruthless  loan sharks ,  the country which lends at very high 8 % rate of interest. It is to be noted while  China lends at prohibitive interest rates , there are countries in the world which lend at concessionary interest rates of 1 to  3%.

Word Bank, Asian Development Bank and Japan’s cooperative agency are among them.  If loans are to be taken from these Institutions , feasibility report, capability report  and environmental report have to be forwarded in regard to the project in view.

If the cost of the project , the  benefits to be derived there-from  and the environmental impact are satisfactory the loan is granted. Besides there are no intermediaries for these loans , and are directly granted to the government . Since the benefits of the projects are reaped after a long time , it is  paramount these loans are obtained on a long term and at a small interest rate.

Firstly , a feasibility study is done when a massive project is being launched. That is to identify  the national needs and plans, and to ascertain whether the aims and objectives can be accomplished through the project. If it is perceived  the objective of the project can be attained , then a capability study is carried out to determine whether everything is in order for the project to be successfully completed.

One example  of a project that was successful on  these lines was the accelerated Mahaweli project. Following the farmer community that multiplied  as a result of the Mahaweli project , the country became self sufficient in rice. The hydro power augmented  the National power grid. Along  the border of North and East , the Sinhala farmer community flourished while populating those regions. It was possible for the government too to re pay the loan taken on account of the accelerated Mahaweli project  at  2 %  interest over a period of 12 years.

As the last government was tapering to an end  , the notorious Rajapakses brought forward a number of development projects. Their sole and whole  objective was to plunder the country wholesale under the pretext of development projects. Believe it or not , because the personal agendas of Rajapakses were masquerading as national interests none of the projects launched by the Rajapakses were supported by the most essential feasibility report or the capability report .

They went after China on the sly which lent on prohibitive interest rates , instead of Institutions which granted loans on  most concessionary rates. The loans taken from China at 6-8 % interest were invested most fraudulently in the following projects :

Ports , Airport, Cricket ground, conference hall, cinema villages , administrative  buildings and parks.  In the end only the pockets of Rajapakses were lined with the huge  illicit commissions while none of these projects brought in a revenue for the country .The people gained nothing from those by way of service.

Consequently , the country fell into deep despair , being unable to repay even the installments out of  the national revenue. Owing to the selfish agendas and rackets of Rajapakses whose gaze were  fixed only on earning illicit commissions , the country was driven into a dire and dismal  situation . By analogy , the country has been driven into  dire straits in much the same way as  the owner of a house losing the title of the deed of the house after borrowing at high rates of interest.

So called Patriotism which spills over like the cesspit ….

Though criticisms are mounted against Ranil , he is never an inefficient administrator. In 2001 when Ranil took over, the treasury was empty and the economy was in tatters. Yet within three years Ranil could resuscitate the economy by whatever means.  In 2015 , Ranil  had to take over a  country which was drowned in debts on a scale unprecedented in country’s history; a country that was mortgaged to China by  Rajapakse family reign; a  country turned turtle because of the Chinese loans taken.

It is very unfortunate the common man has not understood the destruction that was wrought on the country by the huge illicit commissions which went into the pockets of crooked Rajapakses a byword for corruption . Neither has he  tried to understand the cause of  this devastation . Although the Sri Lankans are only idly watching and are silent , the whole world is fully aware of the disaster the country has been plunged into and the most portentous signals  of doom and gloom in  store for the country.

The evil fallout of all these debacles  is , we are today made the slaves of China. While talking about patriotism from the cesspit of corruption and indulging in hate mongering  against the  West , our country had been driven into abysmal despair. Today the whole world is therefore  frowning on us. We are looked down derisively , insolently and as worthy only of ridicule.

Example of the evil fallouts of Chinese loans …

The Chinese loans have plunged us into such a disgraceful situation  that  in order to illustrate the devastating effects of such loans even the African countries choose SL as an example. Yet the locals still deliver idiotic sermons against the ‘invasions’ of the West , without taking the trouble to notice  the insidious invasions of the Chinese under their very nose. This is why while the whole world is well aware of the Chinese loan sharks , sadly , our own  people are blind to  the impending disasters. There are several reasons for that…

The rulers , media and social activists are dumb   before the Chinese Yuan . Because of the loan entanglement  and enslavement ,our ‘first citizen ‘ is also dumbfounded  and blind. The other reason is , the deep seated hatred against the West and the affinity for the Chinese. For instance  , if the Hambantota Port and 15000 acres of the land around had been leased out to India or America , the locals who are prejudiced  against India and America  would have definitely  been up in arms over it.

The side not looked into in the protests against India and the West….

The geopolitics of China is planned not just for a few years but targeting several decades forward. For example , one stretch of the silk route  project is planned  to go on  until  2050. The Chinese magazines in 1960’s and 1970’s were spread even among nooks and corners of the country.

The JVP founder Rohana Wijeweera himself in the statement made to the police in 1971 , clearly mentioned,  it is China that sowed  the concept of “Indian hegemony ’ which was one of his  five famous  classes . Moreover Wijeweera confessed it  was  China’s ‘creation’ . It is well to recall it were Wijeweera and the JVP that separated  the umbilical cord of many politicians who are clamoring on political platforms  today.

There are over 25 countries across the world which are today entangled  in the loan knots of China , and sadly SL is the leading country in that list. There is  no one who does not know about the Greek war Trojan horse heroism . From the time of the Trojan war , the Piraeus Port of Greece has been a strategic port. But now China has taken over that Port .China has also taken over the Australian Darwin Port on a 99 year lease. America, Italy , France and Japan have established camps which are in existence over  many years  in the Djibouti Port that  is located in the nerve center of the Red sea .

But now ,China  challenging America  has acquired 25 % of the ownership of Djibouti Port and 70 % container terminals. Pakistan  which is a neighboring country of China is also strangulated by  the loans taken from the former.  Through the Panama papers it came to light how the Pakistan prime minister robbed via the Chinese projects. These robberies    are not confined only to Nawaz Sheriff of Pakistan or the Rajapakses of SL , this is a common crime characterizing   all countries which deal with China.

It is the practice   of China to generously reciprocate the rulers and officers who most dishonorably and deceitfully  ‘sell’ their countries.

The first country that rose against China’s geopolitical lending enslavement was Nepal. The latter  which was to build the proposed ‘Buddhi Gandhaki’ hydro power scheme at over twice the cost of SL’s Hambantota project , as well as  several other projects  were called off by the Nepal government which rejected the Chinese loan.

The rejection of the Chinese loan which began with Nepal had  today  become a growing tide . Malaysia, Pakistan , Kenya and many other countries are taking measures to invalidate agreements with China.

It was  the then US ambassador Alaina Templits to Nepal who awoke and alerted Nepal to  set the wheel in motion against China’s geopolitical lending enslavement. She launched workshops to create an awareness among politicians and civil societies  , and to enlighten them on the Chinese loan entanglements and knots  . Her activities did not stop at speeches and workshops alone. She wrote to the Nepal’s leading newspapers about China’s lending and enslaving politics which was disguised as aid.  Her bold measures  were  something which would  should shock all but  that was the truth. Unbelievably she wrote to the leading newspapers in her own name !