Ranjan complains to FCID against MR’s US $7.6 million illicit collection and Elle Gunawansa’s US $ 38000 ! 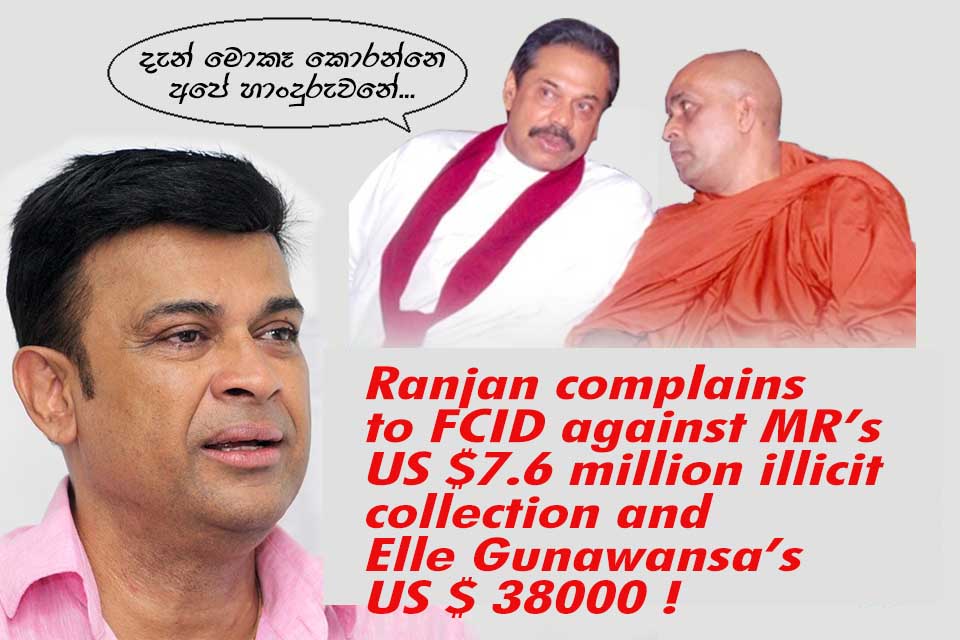 (Lanka e News- 30.June 2018, 8.00AM)  While ex president Mahinda Rajapakse in  Japan openly bragged , he would slit his throat if he has taken even a single dollar ,  Ms.Maria Abi Habib via a New  York Times report on the 25 th exposed that ex president Mahinda Rajapakse whose name is by now  synonymous with frauds and corruption took not just a single dollar but a whopping sum of US dollars 7.6 million illicitly, and Elle Gunawansa a robed monk collected US dollars  38000.00 out of the loan granted by China for the Hambantota Port project . Based  on this exposure, deputy minister Ranjan Ramanayake lodged a complaint with the FCID , Colombo  to initiate  an investigation.

The most important , intriguing and interesting side of this illicit transaction of notorious Machiavellian mendacious ex president of Sri Lanka is , the Colombo office of ‘China Harbor’ Co. the accused is located in  the second floor of the FCID building itself. The China Harbor Co. is one that is blacklisted by the world bank , while Philippines  and  Bangla Desh have also rejected it.

Elle Gunawansa is among the latest breed of Buddhist monks in  Sri Lanka abusing  the sacred saffron robe and as a shield to indulge in rackets , violence and hooliganism as though those are what ‘their Lord Buddha’ preached .

In the complaint of Ramanayake , it is mentioned this monk Elle Gunawansa has admitted he collected the sum of US dollars 38000.00 from a Chinese businessman . Elle Gunawansa had said , an unknown Chinese businessman came and gave this sum to him when he was in the Temple. This is reminiscent of Daisy Aachi’s story of bag of gems . How wonderful ! Lord Buddha renounced all his material possession whereas these  monks are amassing wealth via foul means !

The notorious ex president who is famous for his mendacity and Machiavellian propensities instead of slitting his throat verbally , if he is honest must by an affidavit swear he took this money. If the sum of US dollars 7.6 million has been paid out of the Hambantota project loan ,  since the government has paid interest for this sum too  out of public funds , that sum plus interest should be reduced from the loan amount owed by the government , Ramanayake has stated in his complaint.

Ex Central bank governor Nivard  Cabraal ( who is figuring centrally as an accused  in many Central bank criminal investigations) and Namal Rajapakse have claimed the report is false . If that is so, what should be done is not screaming from Rooftops  to dupe the public  , rather file action against the New York Times newspaper report and claim compensation   , Ramanayake pointed out.

It is significant to note, Ramanayake before lodging the complaint had quietly and intelligently got the facts confirmed via telephone call  by New York Times Maria Abi Habib who wrote  the report ‘How China got Sri Lanka  to cough up a Port’

It is worthy of special mention Mahinda Rajapakse the culprit a  cleverer Machiavellian had not uttered a word about this transaction.