Rs. 1457.4 million paid to ‘Robbing hood’ MR and Elle shall be reduced with interest from loan granted by Machiavellian Chinese..! 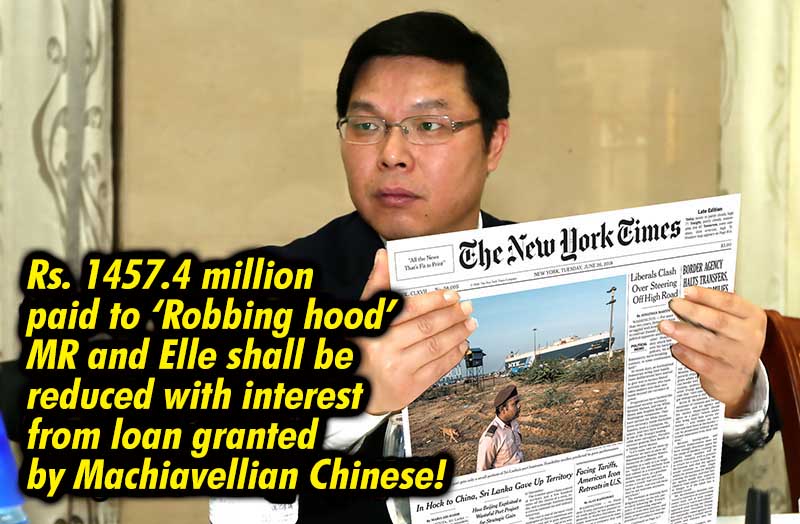 Be that as it may, although words ‘mud slinging for lies’ which are  commonly  used by our Lankan Baiyans ( village backwoods folks)  , those  are not in the world famous Oxford and  Google dictionaries , yet unbelievably these words were incorporated yesterday ( 29) into the Chinese Mandarin dictionary.

In  connection with the NewYork Times report which publicized  that  US $ 7.6 million was given to Mahinda Rajapakse for the presidential election , and the US $ 38000.00  which was released  to the robed monk Elle Gunawansa out of the Chinese loan granted on account of the Hambantota Port project , the Chinese  “political  puppet ‘s” office which acts for the  Chinese embassy in Sri Lanka yesterday said, that report was biased and a lie.

The local lackeys and lickspittles of Rajapakses , namely Cabraal as well as  Nalaka Godahewa the village Veddah claimed the New York Times report is a mud slinging false report. It is by now very clear China too has translated the Sinhala words  ‘false mudslinging’ of the village backwoods blokes giving a mischievous twist to the meaning via the  Chinese mandarin dictionary to add fuel to the fire.   Doubtless  the local ‘Baiyans’( backwoods frogs in the well) are  of course delighted  by that.

The Chinese ‘Ambetta’  (the puppet ) ambassador in Colombo related an intriguing story on the 29 th. He  revealed  , because the New York Times had based its report on a commercial  activity of a private Institution , at diplomatic level nothing can be said about it. This utterance in Mandarin language means  the same as   defecating  through the mouth. When listening to the explanation of Chinese ‘ambetta’  any sane and sensible person gets the justifiable  feeling to light  a Chinese cracker between his jaws. The private commercial Institution he is referring to is the ‘China Harbor’. If that is a private commercial Institution , then why on earth did the Chinese foreign minister and  the former Chinese ambassador to Sri Lanka  come all the way to to sign the agreement to build the Hambantota harbor ?Was it because they had no better place to plant their moth eaten ‘brinjals’?

The prime accused ‘the trapped helpless Medamulana MaRa’ who said in the midst of all these treasons  that if it is proved he had taken  even a single dollar , he would slit his  throat himself is now dumb like the one who had consumed a deadly concoction .

China , please do not  joke for it is a gigantic problem to us !

This is no joke. The people of the country do not want comic relief in this dire situation . Medamulana MaRa the prime accused slitting his throat regardless  , it is because the payment was made to him out of the  Hambantota project loan to the country , it is the people’s throats he has slit by that collection  , for it is the people who are  are being forced  to pay that sum plus interest thereof by  taxes imposed on  them .

The sum of US $ 7.6 million paid to Rajapakse in 2014 end is 1216 million in SL rupees! And mind you the Chinese granted the loan for the Hambantota port project at an exorbitant interest rate of 6.3 per cent. That means a further sum of Rs. 76.6 million per annum  gets added as interest to the sum collected by Rajapakse . For the last  three and half years the total interest  is therefore Rs. 230 million .In other words , the Sri Lankan people  have paid over Rs. 1446 million, or they  ought to pay to China due to the monies  collected by Mahinda Rajapakse on account of his  election  expenditure.

That is apart from the ‘bundle of cash ’ amounting to US $ 38000.00 paid to Elle Gunawansa the robed monk . That amount in SL rupees is six million eighty thousand and that payment has been made out of the Port project loan .Besides the interest applicable to  that sum is  6.3% . Accordingly the interest payable for three and half years is Rs. 1.3 million forty thousand. That is , approximately Rs. 7.4 million has been paid by the Sri Lankan people or ought to be paid by them to China on account of saffron robed Elle’s swindle  .

As this was  pure unalloyed treason and a most heinous crime committed against the people , the  CID was conducting an investigation into this colossal crime . But because Baiya’s  ‘kaiya nariya ’ alias Alzheimer Gamarala who duped the country wholesale on 2015-01-08 pressurized the CID to halt the investigation , the probe had to be stopped midway.

It is now high time the tax paying citizens led by  civil organizations demand   a truthful  and definitive  answer from the Chinese Embassy .

If China has paid Mahinda Rajapakse the SL’s  ‘Robbing Hood’ for his election activities out of its own funds it is no issue. On the other hand , if China has paid Mahinda Rajapakse  out of the loan granted to Hambantota Port , and thereby the Sri Lankan people have been made to pay back that sum together with the interest as mentioned in the foregoing paragraphs , certainly that is detrimental to the nation and a grave issue. In that case , the sum paid (along with interest) to Mahinda Rajapakse and the sum paid to Elle Gunawansa (along with interest) should be reduced from the loan granted towards the Hambantota Port project. .

The sum of Rs. 1457. 4 million paid or to be paid shall therefore be reduced from the loan. In the best interests of the nation  a definite written assurance in this regard should be obtained from the Chinese Ambassador , and the Embassy shall be laid siege to until that is secured.

Whether Mahinda the notorious “Robbing Hood’’ masqueraded as Robin Hood or the robed monk Elle Gunawansa stripped himself nude and played ‘elle’ after collecting the monies is immaterial .   What matters is, if these rascally activities and grand daylight robbery of public funds  are not  remedied duly , let us caution  like how ‘aiyo’ the Sinhalese word found its way into the English language  , it will become necessary for   the Sinhalese word ‘Buddhu ammo’ to be included  in the Mandarin language  of the Machiavellian Chinese.