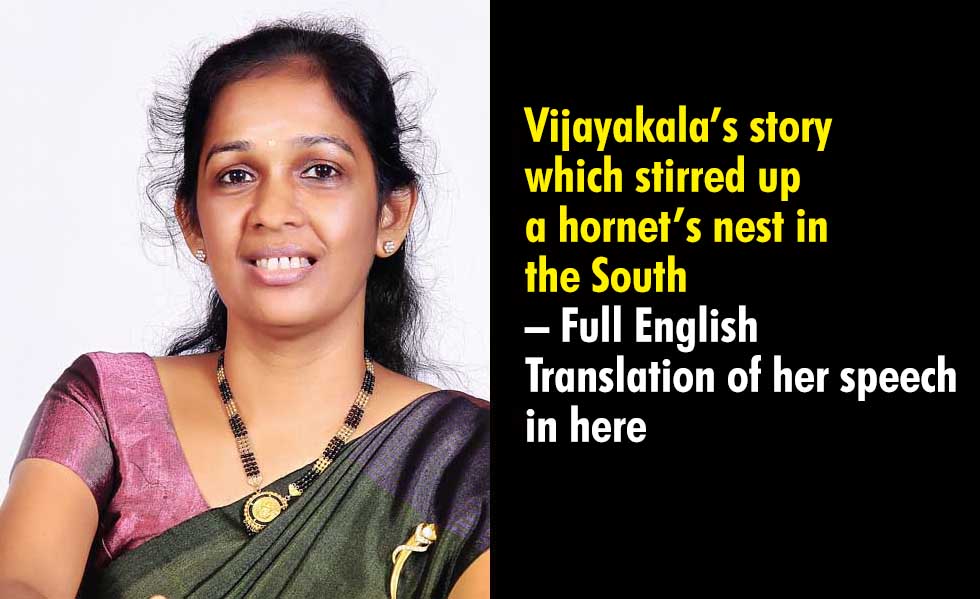 (Lanka e News 04.July.2018, 11.20PM)  The full text of the speech made by deputy  minister for women and children’s affairs Vijayakala Maheswaran at Veerasingham Hall Jaffna on  2018-07-02 which stirred up a hornet’s nest in the South is hereunder….

''The presence of home affairs minister Vajira Abeywardena at this event is highly appreciated  by me and I thank him on behalf of the Jaffna people. I wish to tell the two ministers who are here that we are most hurt over the dismal  situation prevailing here with no aid being provided.

The sufferings of a woman can be understood only by another woman and not by a man. A six years old girl was raped and killed.  Our girls who are receiving no support from anyone  have only one choice – commit suicide. What are we to do? Is it for this a president was  appointed  by us after  so much toil? The situation is so bad that our children cannot go to school and return  home  safely.

All of you know how our people lived before 2009-05-19.( I think the date on your version is wrong) When comparing with today’s situation , it seems the LTTE should be revived. If our children and women are to come home safely , an LTTE administration   is again necessary. What this government has done for the last three years is only returning the lands which were acquired. We thank the government for that.   But beyond that the government has done nothing.

The claim that the government carried out development activities in the north is a lie. We respect the leadership . I am also a  minister of the government . But when nothing is done for the people of the North , our patience has reached the limit.

Of course the war was concluded. But what has the government done to those who became  widows due to the war ? Nothing has been done  to the youths who completed their University studies . There are 30,000 widows in the north and   12000 LTTE cadres in the rehabilitation camps. What is the government doing for them ?

What has it given them ? The cabinet paper to help them was cast aside. Was it because they  aren’t humans?  They took up arms to fight for their rights. Is it because of that you say they are not humans? Today the drug scourge is on the rise in Jaffna. After  the war was over the political leaders are transporting drugs to Jaffna. That is why drug addiction has shot up in Jaffna.

The president must work like  a president .We worked for him. Yet ministry portfolios have been given to those who worked against him. Is that right? Is it fair? That is the same thing which   was done even to the North. I am ashamed to speak these out. In these areas the job vacancies have been filled by youths of the South.

Our people are selling goods at Polas and doing cement mixing .That is why they are forced to stage fasts. The previous government too did the same thing. Jobs shall be provided to our children. The war was confined to the North and east only. Hence a separate special development program shall be evolved for these two provinces. What has happened now is  , special development programs are being implemented for other provinces , but not for the north and east.

Minister John Seneviratne cast aside my request earlier on pertaining to Thennamarachi district secretariat . He helped those who took up arms in the north to do politics  on his behalf .If the Thennamarachi    district secretariat is separated and given , we could reap massive economic benefits .On February 23 rd 2016 too we made that request from our government , and now that the home affairs minister Vajira Abeywardena has arrived here. I request the minister to grant that request at least now.

Minister Thilak Marapone who was the minister of defense during the period 2001 -2004 is also here today. That period there was a conflict between the armed groups and the government forces .You know how the UNP government operated at that time.

There is going to be a presidential election in the future. Our leader fielded a common candidate at the last presidential elections in the best interests of the country. Yet nothing worthwhile has been  done by the national government.  At least now UNP as a party must go alone. Our party head   is a good intelligent  leader .The SLFP has only 23 whereas UNP has 98.

At the next presidential elections we should field a UNP candidate. It is the UNP which had discussions  with Prabhakaran .In  the future too a decision can be arrived at after discussions on behalf of  a UNP government. It is only under a single government good governance can be established. Let us rally together  towards that.''