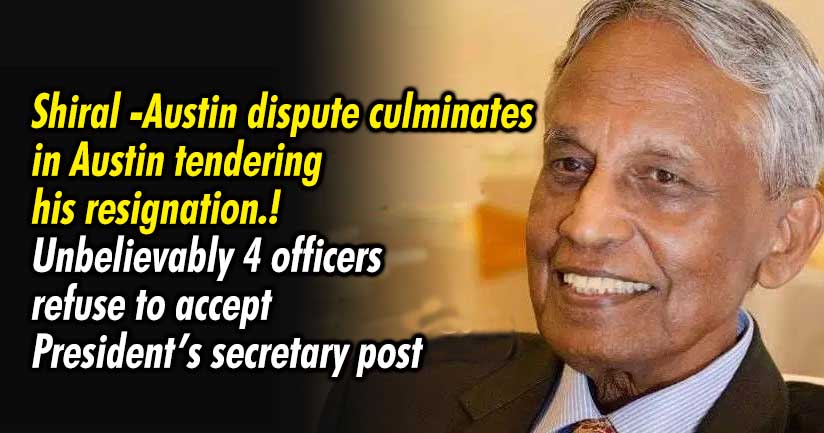 (Lanka e News -05.July.2018, 11.30PM)  The dispute between the NGO crook Shiral Lakthileke (president’s henchman and coordinating secretary) who is carving a short cut to disaster for president Sirisena , and president’s secretary Austin Fernando came to a head with the latter resigning his post today (05).

It is worthy of mention that Austin Fernando was the  only State diplomatic officer who could think sanely , sensibly and wisely among the officers clustered around Sirisena. He assumed duties as president’s secretary on July 1st   2017. Shiral the wolf with a blackened heart in black coat who is a deadly enemy of Ranil Wickremesinghe (Shiral was earlier thrown out lock, stock and barrel by the UNP for his hooliganism , cunning and stealthy activities ) started his usual crafty and cunning maneuvers against Austin saying the latter was pro Ranil.

Austin the only law abiding officer there had hence declined Shiral’s crooked request .Shiral  who has a putrid antecedence of being  a pain in the neck to hardworking efficient law abiding state officers who do not fall in line with his rackets had from that moment planned to get  rid of Austin Fernando , and today his plot turned into reality.

The website operated under  Shiral , no sooner had Austin resigned than it started a mudslinging campaign against Austin Fernando . Shiral who is running a mud slinging website as fake Lanka e News.

It is significant to note , it was only when Austin Fernando the official chairman of the TRC , an upright officer of rectitude  was out of the Island , all the media suppression and oppression took place via the TRC : Lanka e News and four other websites were blocked , as well as the TNL channel was sealed unlawfully.

Austin Fernando is a senior SL State administrative service officer who has a Master’s degree in state administration from the Jayawardenapura University . Based on reports he is to be appointed as a foreign diplomatic envoy.

What is more intriguing than the resignation of  the president’s secretary is the refusal of four secretaries to take over the presidential secretary post. What is more perplexing is , even though four officers  were invited to take over the role of secretary to president before Austin’s resignation  , all four of them have declined the offer. Among the four are two officers already  serving in the State administrative service. The other two are secretaries who have earned a reputation in the country.