Not enough the Rajapakses’ pillaging – Basil ‘s wife too collects Rs. 20 million from another Chinese Co. ! 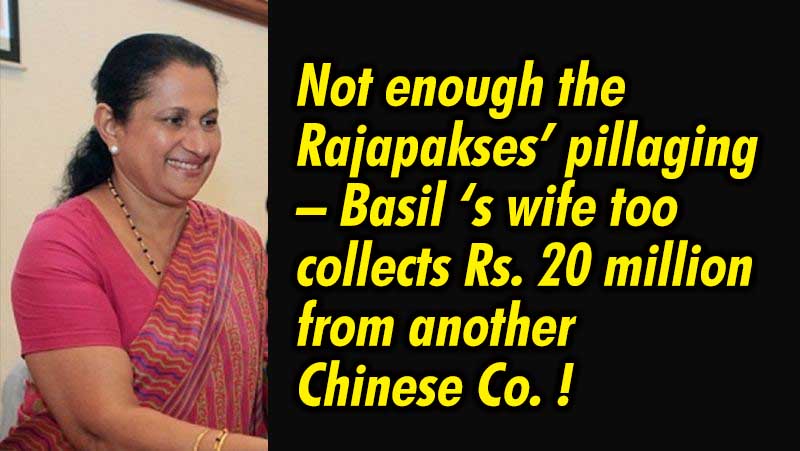 (Lanka e News -06.July.2018, 11.30PM)   Pushpa Rajapakse the wife of ex minister Basil Rajapakse had received  a whopping  sum of Rs. 19,410, 000.00  supposedly as aid for the foundation run by her  from the Chinese Co.( CICT) that undertook  to build the Southern  harbor. However  now it is reported that this colossal sum was not given as a gift  but rather it is  part of the expenditure to meet the cost of the construction of the Southern Port.

According to  the Government Audit query POS/A/SLPA/2016/4  dated 2016 -03-01  , this huge payment to the voluntary organization of Mrs. Basil Rajapakse has been included as part of the expenditure for the construction of the southern port development by Container International Terminal Co.Ltd. Colombo which is the Chinese Co. that had undertaken to construct the Southern harbor.

The CICT Co. has commenced its operations as regards the Southern Port Container Terminal operation development on 2013 -07-13 on a 35 years re -payment program .

CICT Co. has made this disbursement by Hong Kong and Shanghai Bank check No. 594691, and that sum had been credited to account No. 204 - 1 - 001 – 0003290 at Peoples bank headquarters .The Government Audit has confirmed that the sum had been credited to that account. When the Ports Authority Financial director’s audit made inquiries into this  and from the CICT Co. chief executive director/officer , it had been confirmed the payment was made to the voluntary organization aforementioned , and it was further confirmed  based on   the accounts  records that it is  part of the expenditure towards the Port construction.

Yet  it has come to light   this payment has been made to Pushpa Rajapakse Foundation  by the Chinese Co. at a request made by the Ports Authority. An intermediary who came in at the time of signing the ports development agreement between the Co. and the Ports Authority had  released this massive sum to the voluntary organization.

In the circumstances the Govt. Audit had inquired in its Audit query , when there are so many voluntary organizations in this country , why so much money was credited to this organization and based on what motive ?

In addition , under section 62/8 and sub section of the CICT contractual agreement  ,after the end of 35 years when the contract is over, the government (Ports Authority) has to re pay the CICT Co ., the latter’s expenditure  towards the bogus property and the Container Terminals development together with  the book value owed  to the operator  .

Therefore the government audit has pointed out with deep regret this colossal sum collected from the Chinese Co.for the voluntary organization of Pushpa Rajapakse out of the funds meant for the Southern Port development is absolutely wrong and most reprehensible.