Don’t halt capital punishment, go ahead and implement the law of pounding infants in the mortar ! Primitive Maithri’s international image in tatters ! 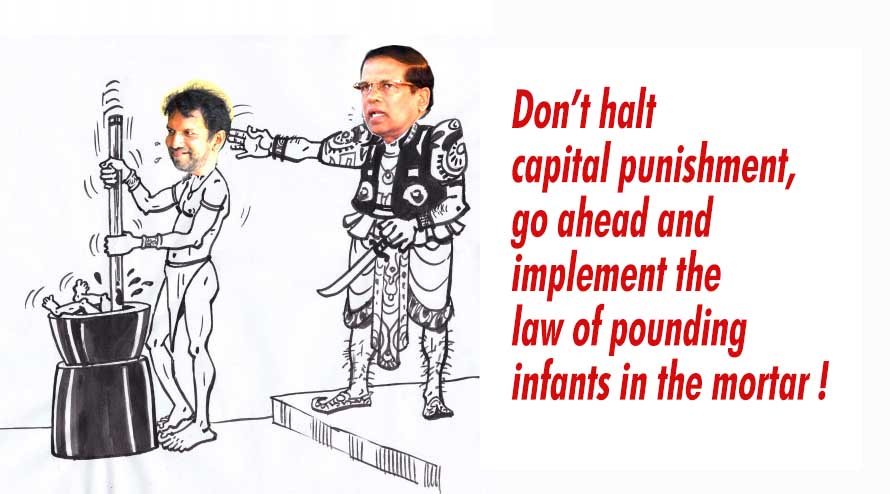 (Lanka e News – 18.July.2018, 7.00AM)  The president who wanted to usher in a Maithri era is to re-introduce capital punishment after a lapse of 40 years. This ‘wonderful’ advice based on reports reaching Lanka e news  has been proffered to Maithri by one of his secretaries  Shiral Lakthileke the notorious NGO crook and political outcast who is now well and widely known for  leading poor Maithri on the sure road to perdition.

“Shiral was  appointed as coordinating secretary to the president , wasn’t  he ?  Now there is nothing Mahinda has to do to destroy Maithri.  Shiral will do that well and thoroughly . Surely ,don’t we know about Shiral ,” he remarked with a hearty laugh.

It is an incontrovertible fact , president Pallewatte Gamarala as of late has no welcome anywhere , and his popularity base had plummeted to a meager 4 %. When Mahinda group called him ‘aapaya’ , the people without  heeding that cast their votes to make Gamarala the president. Lo and behold! Instead of fulfilling the solemn promises he made to the people , Gamarala the president began doing  everything to the contrary thereby  flagrantly  undermining  good governance. Little wonder  he is  now nicknamed ‘enemy of good governance ’ .

Naturally   people are  now rightly  forced to hurl abusive epithets such as ,Patholaya (spineless ) , Sevalaya (brag) and  drohiya(traitor)  at him . Shiral the devil incarnate who knows only to carve a short cut to disaster  for his superiors wherever he worked  had given his  two penny half penny advice to the president . He has told , if Gamarala is to refurbish his image before the people which is currently in tatters , capital punishment shall be re introduced . Gamarala who is well noted for appointing misfits  , and always led by the misled has ‘jumped’ at the idea and exclaimed  ‘brilliant advice’ , and made  this proposal to the cabinet.

Even the international image is torn into shreds …

Though the president’s popularity had steeply dropped to a 4 % , and he is nicknamed patholaya , sevalaya and drohiya within the country , his international image was not that badly damage hitherto. However ,   now the devil incarnate Shiral Lakthileke who can only think evil , act evil and do evil has through the capital punishment proposal destroyed even that little international repute  which was remaining   of Gamarala. This was borne testimony to when the State diplomatic community in Sri Lanka representing 9 powerful countries in the world wrote   a common letter to the president to abandon the implementation of the capital punishment . The common letter has been signed and written jointly by European Union representative, British High Commissioner , Canadian High Commissioner , French Ambassador, German ambassador , Italian ambassador Netherlands ambassador ,Norwegian  ambassador  and Rumania’s  ambassador.

The bhikkus at that time instead of preaching Lord Buddha’s teachings , had given advice to the kings with the motive of filling their own bellies  with food and drinks.

It is the British and Netherland nationals who made the execution only by hanging  lawful ,replacing the primitive cruel punishment and torture in SL.   Later , in those countries when they stamped  that out , ours as a free country joining with the civilized countries confined the capital punishment only to the books , and discontinued it. It is now 40 years since it  was discontinued.

Now, it is apparent the lackey and lickspittle who is leading Maithri on the road to perdition has need to portray Maithri as a ‘Raja’ (King)   even going beyond  Mahinda’s histrionics .Interestingly , the present primitive  ‘King’ himself  earlier on   announced he has a sting ray tail and a sword too to inflict punishment.

To these lackeys and hangers on of the president who are having need to make Rajjuruwas  (kings) out of sevalayas  (glib empty brags ), there is only one thing that can be said , ‘may you advise the president,  without  discontinuing the capital punishment ,  to introduce the law which permits the killing of infants by putting them in a mortar and pounding them. In that case, your president can become  your  great  ‘buffalo king of  the wilds’ you are trying to make of him .’

The full text of the communiqué of the European Union is hereunder.

The Delegation of the European Union (EU) issues the following statement in agreement with the EU Heads of Missions, the High Commissioner of Canada, and the Ambassador of Norway resident in Colombo, Sri Lanka.

The Delegation of the European Union, the missions of the EU Member States in Sri Lanka as well as the diplomatic missions of the Governments of Canada and Norway in Sri Lanka have written to H.E. President Maithripala Sirisena to verify the worrying information in the public domain about the intention of the Sri Lankan government to resume implementing the death penalty after a moratorium of more than 40 years.

The mentioned diplomatic missions have made known in their letter that they strongly and unequivocally oppose capital punishment in all circumstances and in all cases.  The death penalty is incompatible with human dignity, does not have any proven deterrent effect, and allows judicial errors to become fatal and irreversible.

The diplomatic missions have requested the President to maintain the moratorium on the implementation of the death penalty and to uphold Sri Lanka's tradition of opposition to capital punishment.