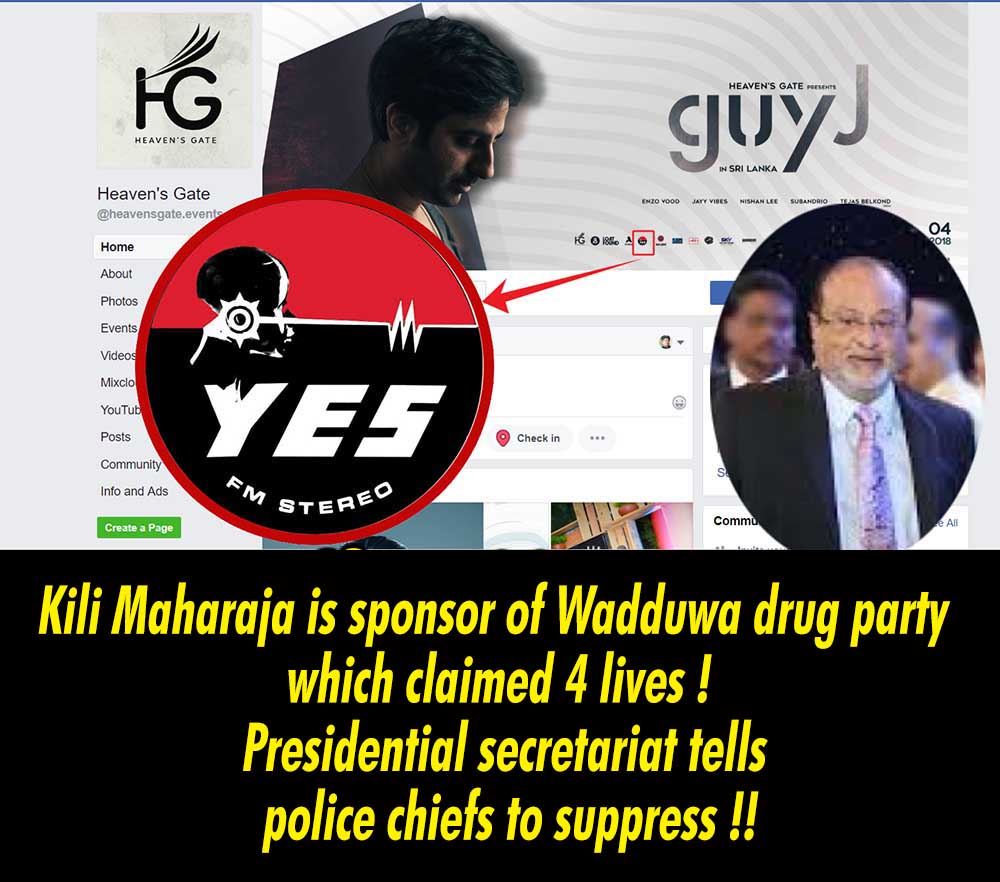 (Lanka e News -12.Aug.2018, 11.30PM) It has now come to light it is the English electronic channel of Kili Maharaja - Capital Maharaja chain which was the main sponsor along with other sponsors in the DJ musical party which served ‘heavens gate’ illicit drug pills at Saffron Beach hotel , Wadduwa on the 4 th (Saturday) during which mirth and merriment 4 youths died.

Although there were a number of other companies which were also sponsors , those were not high profile companies . It was only high profile Kili Maharaja’s Co. which was the leading sponsorship Co. The Avant Premier Co belonging to Samarasekeras who are the agents for Red bull drink also played a key role in this deadly ‘drug scourge’ party

The four youths who died bore tell tale signs of taking drugs , and the cause of death is an overdose of drugs leading to a rise in body temperature , a medical specialist who is a resident of Britain , and an inquirer into sudden deaths told Lanka e News.

When treating , what must be considered is not the rise in temperature but the drug overdose and an anti dose must be administered . The specialist regretted that when the true cause of death is overdose of drugs , those responsible in SL are trying to suppress it.

The worst part ! the Kili Maharaja’s mahajara media channels which telecast breaking news every hour when such a tragedy occurs, only telecast this most grave incident just once or twice after long intervals in order to conceal information about those individuals who organized the ‘drugs party’

The party has commenced on the 4 th at 7.30 p.m. and the first victim had collapsed at about 3.00 early morning the following day. The organizers have had a hired ambulance in the ready . When the victims became unconscious , from time to time they have been taken to Panadura hospital by the ambulance. Even when three of the youths died the party had been continued uninterrupted. Finally the party had been terminated the following day(05) at 10.00 a.m. The fourth victim had died on the 5 th evening.

Though the organizers of the party should have been arrested immediately , Amila Pushpakumara and Harshan Eranga the two suspects were arrested only after a long delay on the 9 th.

Shame ! it is the presidential secretariat which had phoned the police chiefs and instructed not to publicize that deaths were due to drugs , based on a probe conducted by Lanka e News . When delving further into this , it was discovered these instructions have been given by those holding director posts in the presidential secretariat and who are under the pay of Kili Maharaja. The false excuse given by them is , publicity would be an impediment to the crusade of the president against drugs. But the true reason for issuing this instruction is , it is Kili Maharaja who has been the main sponsor for these drug pills cum DJ parties. It is worthy of note , Maharaja’s Company had been providing sponsorship to such parties over a long period.

Striking at the root of these vices is most imperative and important . Hence not only those who organized these drug parties , even the sponsors including Kili Maharaja should be arrested and interrogated . Otherwise the big din made by president that he is going to hang the drug dealers is just another farce and a loud fart .