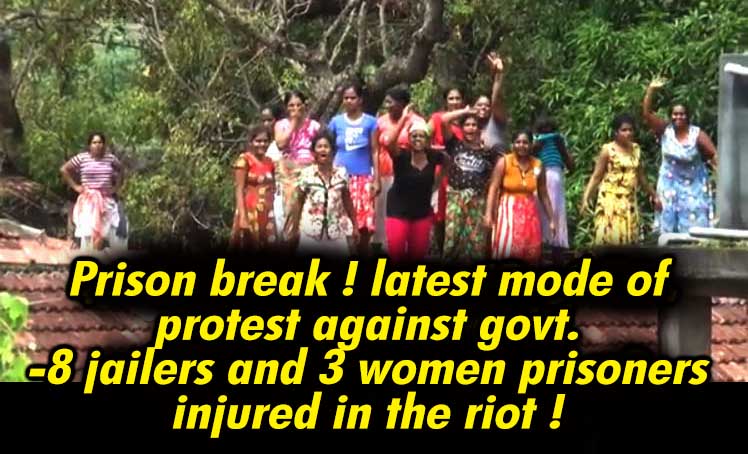 (Lanka e News -22.Aug.2018, 11.45PM) The latest pawns of the government’s political opponents are the women prisoners . On the 13 th morning , a group of women prisoners of Welikade jail suddenly climbed on to the roof of the prison roof and staged a protest. Their demand was , the cases against them shall be heard expeditiously , and they be released on bail in the meanwhile. A majority of them were those who are facing charges of selling or transporting drugs , and it is the established law in the country that the lower courts do not grant bail in respect of cases involving drugs.

Strangely , no sooner the prisoners appeared on the roof than another protest was staged outside the prison at the same time . This was by a group who called themselves as ‘ Organization protecting rights of prisoners’ , an organization which has no background or foreground , and none knows from where they originated like an illegitimate child who knows not his/her parents or origin. They alleged that unfair treatment is being meted out to prisoners . Mind you, this is an organization which was nowhere around and in the wilderness when prisoners were in the past killed in large numbers , now showing shedding crocodile tears for ‘kudu ‘prisoners. (Herein is a video footage displaying the utter stupidity of the protestors )

From this it is very evident the prisoners within mounted the roof to serve a hidden agenda of some others .Another violent group of these protesting women prisoners serving politicos seeking cheap political plus points did a ‘play acting’ on the 20 th .

This meaningless protest was against a decision taken to transfer a group of prisoners who protested the previous day and are facing charges involving drugs, to another prison . A group of prisoners who climbed on to the prison roof again started pelting stones at the jailers . Later as the situation escalated , the prisoners broke the ward where they were incarcerated , came out and attacked about 100 officers . Following a clash between the prisoners and the prison officers , 8 officers and three women inmates were injured. The injured officers were admitted to hospitals while the injured prisoners were entrusted to the care of the prison doctors.

After the clash , 52 women prisoners who were involved in the attack were transferred to another prison. Like how the Sri Lankan prisons are are not in good shape , so is a backlog of over 700,000 cases in courts, which holds most grave portents . An intriguing video footage hereunder clearly depicts how a group of political scoundrels are exploiting the situation to achieve their cheap political agendas and ambitions.

The foolish woman in the video says the inmates are in prison because of the frame ups of the police against them, but the very next moment she says , whether they are addicted to kudu or sold kudu, they had paid taxes. Going by the outrageous most rowdy conduct of this woman , what amount of violence the other inmates are unleashing is borne testimony to by this video