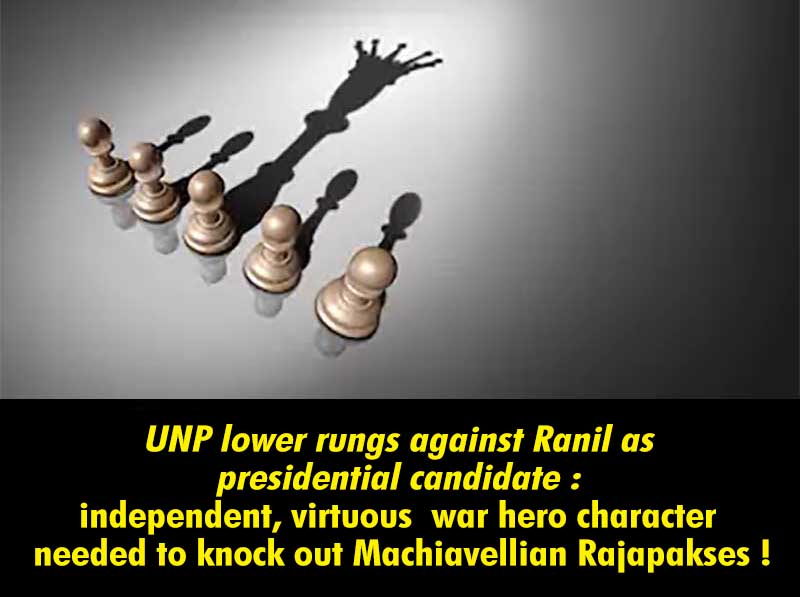 (Lanka e News -25.Aug.2018, 8.30AM) If an unavoidable presidential election is to be held , the majority in the lower rung of the UNP has decided that Ranil Wickremesinghe shall not be fielded as the presidential candidate, according to unofficial reports. The reasons cited by them in brief in support of the decision are as follows :

Ranil Wickremesinghe who had the opportunity , people’s backing and the responsibility as a prime minister, however in much the same way as the incumbent president Pallewatte Gamarala who within 48 hours of victory betrayed the people’s mandate , neglected to mount justifiable protests against it and remedy that most reprehensible situation . Hence , Wickremesinghe who established a consensual government which was in fact a ‘nonsensical government’ , like Gamarala had earned the disrepute that he will not be able to rebuild the image among the masses under any circumstances.

Arjun Mahendran who did not donate even for a plain tea during the period of about 20 years when UNP was in the opposition , just because he was a friend of Wickremesinghe who served the latter’s ‘secret desires’, Mahendran was made the Central bank governor to cover up the alleged corruption of Mahendran . Consequently , Wickremesinghe plunged the party members and the masses into doom and gloom.

Ranil Wickremesinghe instead of ‘ consensual governance’ and by commencing a so called ‘achievement of a psychologist’ of his own ,and empowering it has driven himself to the position where the common candidate Gamarala got stuck from the time he took over the reins of the SLFP. Instead of looking for an alternative to ‘good governance’ , and by trying to rescue same further , he eroded the dignity and trust reposed by the party and the forces which were with the UNP on 2015-01-08

The consensual government was formed with Gamarala of Polonnaruwa to find answers to the national issue, but by not giving priority to that and shelving it for 3 years, the faith reposed in the UNP and the politics of the south by the minorities had been completely destroyed by Gamarala and Ranil Wickremesinghe . Consequently the country is once again being driven to the brink of an ‘unfortunate cruel war of mistrust.’

There are many reasons for Ranil Wickremesinghe ‘s failure in the economic affairs. In the financial perspective he had not been able to succeed with not a single trade agreement or commercial Institution proving successful during the last 3 years .If there were obstacles created against success , even when there were opportunities using the political acumen to utilize the people’s force which installed the government in power , he did not care two hoots for those opportunities . Because of this neglect alone disadvantages resulted . Besides he had all along proved he is a failure when it comes to political management .

In the overall picture , on 2015-01-08 , the majority of people did not repose faith in Maithripala Sirisena who deserted his party members and was a ‘refugee’, rather they depended on Ranil Wickremesinghe. But because Ranil could not live up to the expectations of every party , every force which had faith in him , and fulfill their aspirations , Ranil only succeeded in instilling among the forces which brought the government into power the irreversible opinion that Ranil and UNP have no sense of gratitude.

Based on the aforementioned reasons and others , it is the view of the lower rung members of the UNP that if Wickremesinghe is fielded as the presidential candidate at the forthcoming presidential elections it will be suicidal.

At all events , what is expected of the victorious presidential candidate by the pro good governance hearts are : he must clean up the remaining dirt and filth of the executive presidency ; does not promote his family’s success; has proved his non partisan traits but in whom the UNP can repose implicit faith ; after coming to power he does not again cling on to the party; knows what is non partisan presidency ; acts constitutionally ; of good character ; can be trusted by the Sinhala Buddhists, minorities, Leftists , business community, and civil organizations without issues; has an untarnished international image ; respectable; virtuous ; and possessed of a war hero character.