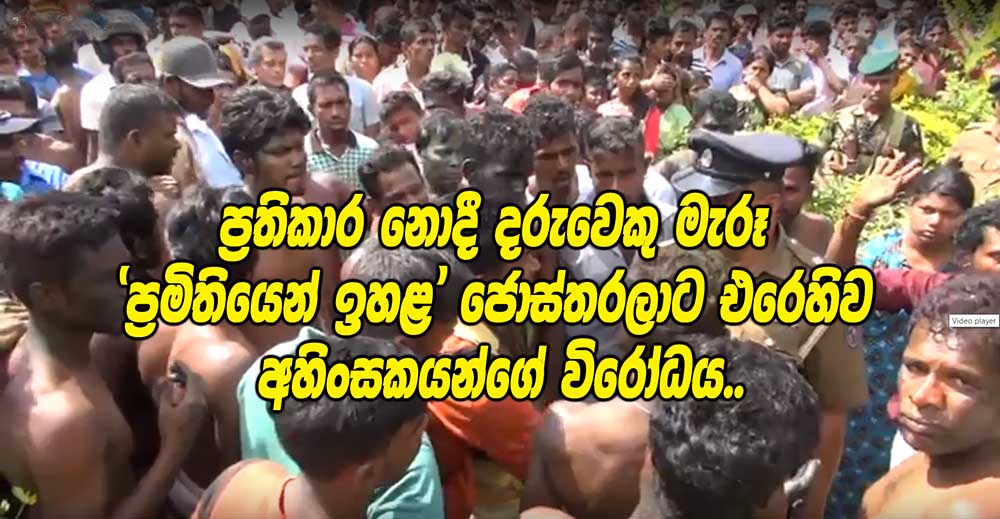 (Lanka e News - 30.Aug.2018, 10.00AM) An infant died at Galaha hospital because of the gross neglect and dereliction of duty of two rascally doctors . These are the doctors who after completing their studies out of public funds waste their time out on pavements to protest and claim their superiority while neglecting their duties towards patients. Because no medical treatment was given to the child for two long hours by the doctors , and the driver of the ambulance of that hospital too has refused to take the child to Peradeniya hospital, the innocent victim met this fate.

This tragedy occurred on 28 th morning.

Those who were provoked over this tragedy had demonstrated their bitter resentment against the hospital administration. They had caused minor damage to the hospital , and attacked the vehicles of the doctors with stones breaking the vehicle windshields into smithereens.

The innocent infant was admitted to the hospital at 7.00 a.m. but until 9.00 a.m. no medical treatment was given. As the condition of the infant was turning for the worse the parents had tried to dispatch the child to Peradeniya hospital . However the chief medical officer Jayasekera had obstructed to that.

Even the request to take the critical patient to the Peradeniya hospital was turned down, and the ambulance driver had entered into a conflict with the parents. This driver had then taken the ambulance away saying there has been an accident elsewhere.

Meanwhile a request was made to the police to dispatch the child to Peradeniya hospital , but the police too was not allowed.

According to the residents of the area , the three doctors employed at the Galaha hospital are never in the hospital as they spend all their time on their private practice. Moreover , a large number of children have died in that hospital earlier on , and one child was dragged and taken away by a dog – gross neglect of the staff proved.

These are the scoundrels after becoming doctors out of the public funds who stage meaningless strikes and heartlessly compromise lives of patients . When they should be the best friend of the patients after taking the sacred oath to serve selflessly , they are instead behaving as enemies of the patients while only selfishly serving themselves demanding privileges endlessly and ruthlessly, to the detriment of the patients and the country as a whole.

Doctors are generally considered as ‘god’ but because of a few doctors behaving like Draculas lusting for blood uncaring for human lives the entire profession is being disgraced and degraded. It will be in the best interests of the profession , patients and the entire country if at least one such doctor engaged in villainies and ruthless negligence is punished duly by canceling his / her medical practitioner license, as well as blacklisting them. That will deter and daunt the other rascally doctor killers and doctor draculas.

It is no point screaming at politicians alone that they are devastating the country. These scoundrels and rascals who are of no use to the public , disgrace the profession and kill patients are doing much greater damage than the politicians. At least the politicians have to face the people once in five years , but these medical villains have nothing to fear or face during their career despite their egregious cruelties , atrocities and neglect of duties.

These are heartless scoundrels who have become millionaires after studying out of public funds and collecting salaries paid out of public funds. It is a cruel irony while the public are suffering on account of them, these medical scoundrels and villains are living in the lap of luxury all throughout their lives . What a strange phenomenon ? Even after these scoundrels and rascals die after neglecting their duties and allowing the patients to die thereby , it is the public that have to pay their widows’ pensions .