Gnanassara’s appeal rejected with the contempt it deserved; Court is not a kasippu den of robed rowdies ! 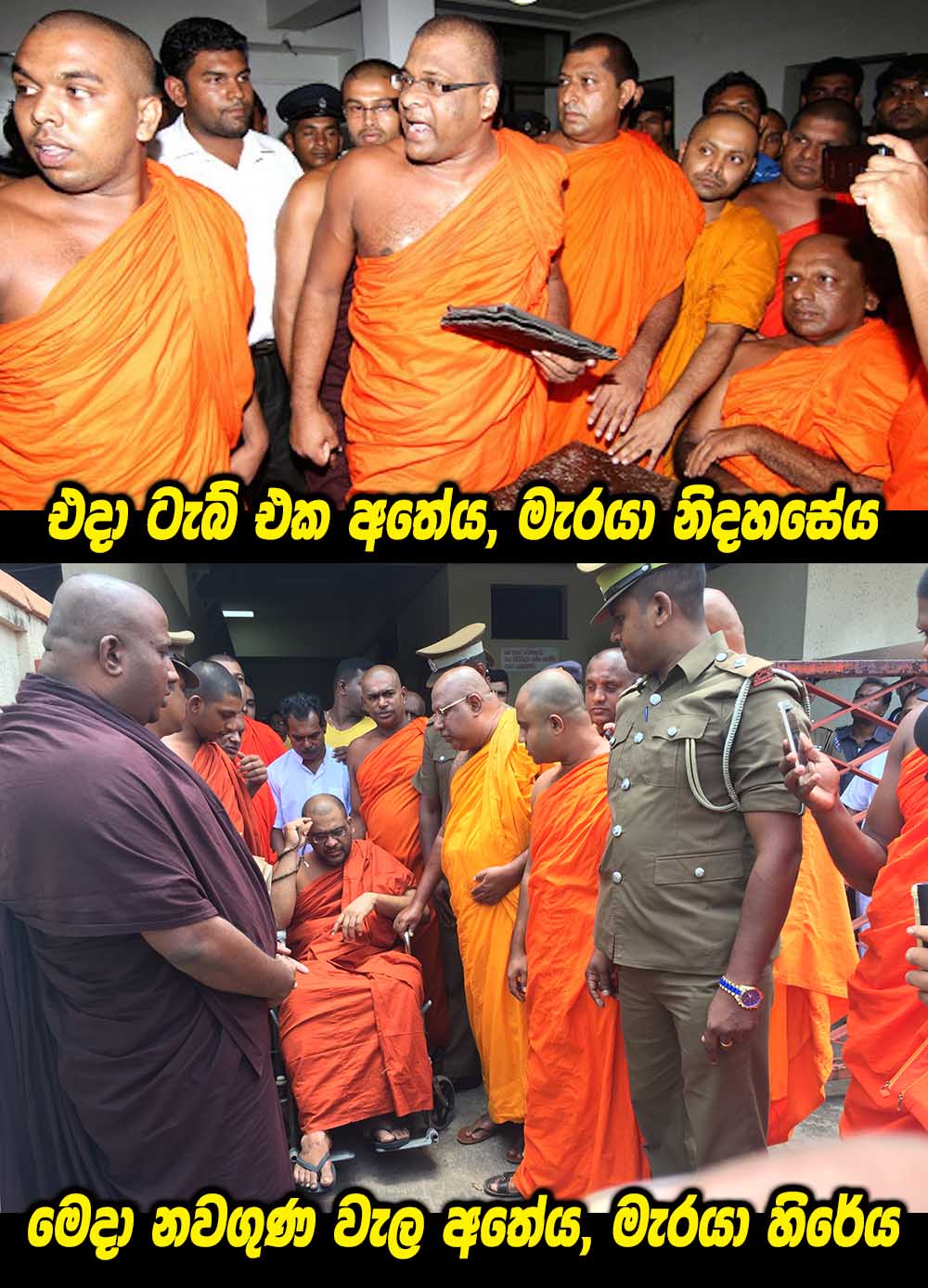 (Lanka e News -02.Sep.2018, 5.45 PM) The appeal made by most notorious robed rowdy rascally monk Galagodaathe Gnanassara who leaps before he thinks , a disgrace to his own religion and a menace to law abiding society , and who pled ‘ aney please do not put me in jail’ after committing all the criminal offences was rejected by the panel of two judges of the appeal court comprised of most intelligent and respectable justices Preethi Padman Surasena(president ) and Shiran Gunaratne thereby upholding the earlier verdict delivered by the appeal court against this ‘manimal’ who committed contempt of court.

It is now crystal clear Gnanassara made a sale of lofty Buddhist philosophy like selling cinnamon after picking and crushing its discarded barks , to degrade and disgrace his own religion.

The latest court verdict has stripped nude the Nayake leaders who preached that the court decision against Gnanassara earlier on was wrong despite being fully aware of the inhuman nature and inhumane activities of his . Incontrovertibly , this rowdy was indulging in all the villainies and stooping to all the lowliest , anti social and anti religious activities including amassing filthy lucre while wearing the sacred saffron robe unbecoming of a genuine Buddhist monk .

This must also open the eyes of the stupid clowns who are grinding their teeth and biding their time to perpetuate their presidential position and forgive these robed rascals who are enemies of the Buddha sasana , in order to grab votes even by selling the stinking underwear with the label ‘pardon’ .

At all events , with this court verdict on the 30 th , the fate of prisoner W 17640 Gnanassara was sealed. That is he will serve a sentence of 19 years in jail suspended to 6 years RI .

Gnanassara made an application to the appeal court challenging the earlier decision of the appeal court through his lawyer Rienzie Arasecularatne P.C. who made his submissions on the 30 th requesting court to grant permission to appeal to the supreme court (SC)

Arasecularatne argued that there were three flaws in the appeal court decision delivered earlier. Therefore he claimed that Gnanassara has the right to make an appeal to the SC.

The deputy solicitor General Rohana Abeysuriya who countered those stupid arguments requested court to refuse the permission sought by Arasecularatne on behalf of Gnanassara.

The judges of the appeal court after weighing the pros and cons of the arguments rejected the request made by Arasecularatne.

Though it is not known how a statement ( evidence) could be made again in an appeal and on what legal basis , yet the fact remains that it was allowed. This will go down in world history as the first time evidence was given in an appeal in courts .

No matter what, Gnanassara who did not appear in court to hear the verdict , got himself admitted to Jayawardenapura hospital the previous day. He was finally fetched as a convicted prisoner to jail from the hospital .

Though the prison chiefs said , Gnanassara was attired in the white loose prison garb , when Gnanassara was transferred from the hospital to the prison on the 30 th , he was not wearing the prison clothes. In addition Gnanassara was permitted by the prison officers ,while being a prisoner in the custody of the prison to address the media. Talatha as the minister in charge should hold herself responsible for the flagrant unlawful activities.

If the lawlessness in the country which is permitting every son of a bitch to be treated differently before the law cannot be halted , whether it is good governance , or goofs’ governance or goons’ governance, call it what you may that is in existence, it cannot maintain a successful administration . The inevitable outcome : the people will be taking the law into their hands every day as a matter of routine , and that will be inevitable. In that event the rising ‘demon ’ in the form of people will be unstoppable.