Shame ! President again to the fore to rescue criminals scolds police and tells not to interrogate criminals!! 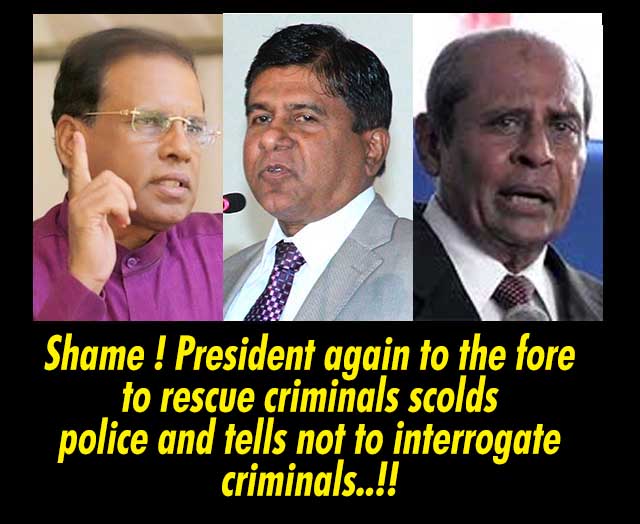 (Lanka e News -12.Sep.2018, 7.00PM) The president had once again berated the senior police officers who are duly enforcing the law ,and furiously ordered them not to interrogate RavindraWijegunaratne the former Navy Commander and present chief of staff who fled the country on the 10 th early morning when he was summoned to the CID on the same day to record his statement in connection with the murder of 11 individuals including students, based on reports reaching Lanka e News.

Ravindra was summoned by the CID to record a statement based on charges against him of aiding and abetting the brutal murderer Navy Sampath involved in the multiple murder of 11 individuals , after committing extortion . Ravindra is facing charges of harboring and hiding the prime suspect navy Sampath as well as smuggling him out of the country after paying him Rs.500,000.00.

The president had acted this unlawfully shielding and safeguarding the criminals involved in the most heinous crimes during a discussion held at his Paget road residence on 11 th night. The chiefs of the CID ,FCID, the Police and the defense secretary were present at this discussion . In addition , the minister of higher education and culture Wijedasa Rajapakse and minister of foreign affairs Thilak Marapone who had nothing to do officially with the subject were also present . Minister of justice Thalatha Atukorale arrived after the conclusion of the discussion .

He is totally averse to Ravindra being interrogated without any reasons, and because of this the Rajapakses are being strengthened ,Gamarala asserted while conveniently forgetting that it was he who hitherto blocked the investigations pertaining to the Rajapakse crooks and criminals.

The police officers conducting investigations said in response , it is not without grounds Ravindra is being interrogated , and is because there is clear and cogent evidence against him that he gave protection to Navy Sampath the criminal and aided him to flee the country. Despite this clear explanation , president Gamarala was insistent on his anti national lawless stance that he is strongly opposed to the interrogation of Ravindra.

Wijedasa Rajapakse and Thilak Marapone fuelling the fire in support of the president said , by questioning the members of the forces , Rajapakses are being strengthened. .

The senior police officers then cleared the fog of prejudice of president by saying it is not the duty of the police to concern themselves with who they are strengthening , and all what they do is conducting the investigations impartially . Yet owing to the stubborn stance of Sirisena alias Sillysena , the police chiefs had no choice but to put up with his obstinacy of a mule attitude and obnoxious nature until the discussion was over.

Even in the past Wijedasa has acted rascally and undermined the legal processes by saying he would not allow Gotabaya to be arrested when he was the minister of justice. He had to lose his justice ministry portfolio because the UNP MPs (except Daya Gamage) opposed his reprehensible attitude .He is such an anti national scoundrel that even after becoming the minister of cultural affairs he is a thorn in the side of those who perform their duties duly.

Thilak is also another villain of the same ilk of Wijedasa . Because he was appearing for cases on behalf of Rajapakses while being a minister he had to sacrifice his portfolio. But when he managed to secure another portfolio – minister of foreign affairs , he provided the necessary fuel to ASP Liyanage the notorious SL ambassador to Qatar to wreak havoc while engaging in official duties thereby tarnishing the entire image of the country.

Following the advent of good governance government the police department was brought under the Independent Police Commission . That is, it was taken out from the defense ministry and as a civil ministry it was brought under the purview of the ministry of law and order in order to rescue the police from the pressures brought to bear on it by the executive . Sadly now, worse pressures are being exerted by the shameless president after inviting the senior police chiefs to his residence . All Law abiding citizens should put their foot down and oppose such actions which are most portentous signs .

Lest President Gamarala is ignorant of the gravity of his despicable actions , let him be warned, his coming forward to rescue the criminals is itself giving authority to commit crimes.