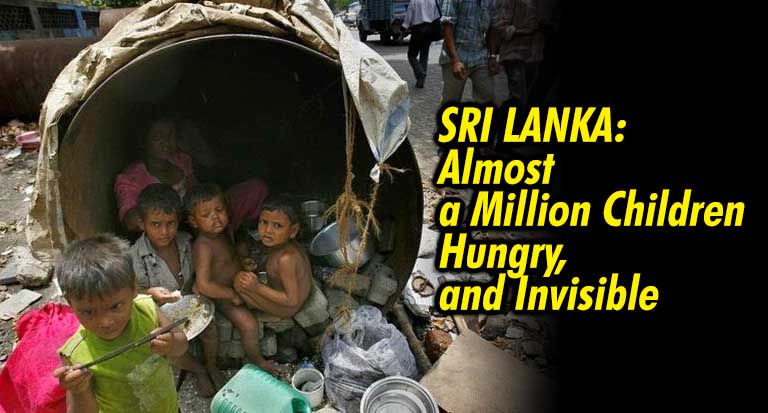 (Lanka e News - 13.Sep.2018, 7.35PM) Sri Lanka repeatedly tops the ranks in South Asia when it comes to hunger. It in fact has mostly sat with the much better doings middle-income countries in global hunger indexes. Not any more despite the fact that it was found to be the most food-safe country in South Asia in the 2017 Global Hunger Index (GHI) by the International Food Policy Research Institute. It also performed well on several indicators like affordability (54.8), availability (52.8) and quality and safety (49.5).

The rosy picture ends there. The same GHI also found alarming rates of WASTING among the children of the country. With 14.7 percent of the country’s children stunted and 21.4% of children under 5 years already wasted, Sri Lanka finds itself among only four countries in the world to have every fifth child of the country wasted! The other countries with over 20 percent wasting rates are India, Djibouti and South Sudan.

So how can Sri Lanka be both food secure and have such wasting rates at the same time? How can it be performing so well on affordability and availability of food and still let so many children fall through the safety net into chronic malnutrition and wasting?

Further exploration into the data complicates the picture even more. The paradox of food security in the face of such high figures of wasting is further evidenced by the poverty profile of the country. So many children seem to go to sleep with empty stomachs despite the country doing much better than its neighbours even on poverty estimates! The Sri Lankan government listed only 4.1 percent, or 843,913 people as poor in 2016, down from 6.7 percent in 2012/13. India, the only other country in the region with wasting among children over 20 percent for comparison, still has 21.92% of its total population officially living in poverty.

Further, translating the data into numbers brings out even stranger facts. Let us change the percentage points into real numbers for instance: at 14.7 percent a total of 256,000 children are stunted, at 21 percent 373,000 children are wasted. Now the question becomes, are these children counted among the official poverty estimates? Are they, a total 629,000 children, included in those 843,913 people Sri Lanka officially recognises as poor? If NO, why not? If YES, what about their parents? And WHO are the poor then...

Further, though one still struggles with data, the demography of hunger in the country suggests it to be widespread and not confined to remote, underdeveloped parts of the country. Wasting among children in Colombo, for instance, is still a high 12 percent, down only one percentage point from 2006.

The relapse of high levels of wasting and malnutrition in Sri Lanka, a country which has made spectacular achievements in snatching its population away from hunger is particularly worrisome. It is time for the Authorities to wake up and pull their act together, before it becomes totally unmanageable.

A Statement by the Asian Human Rights Commission