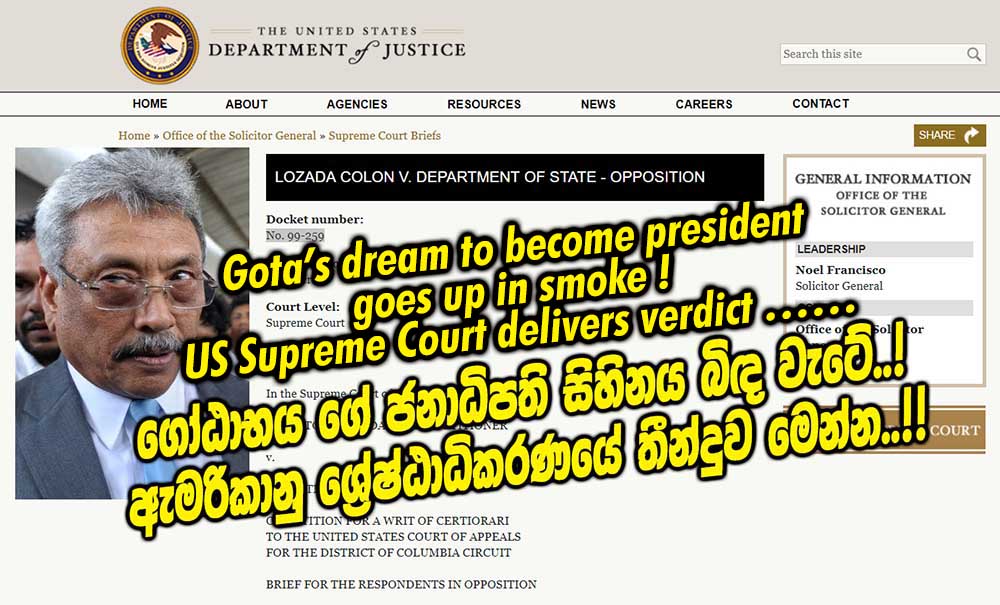 (Lanka e News – 2018.Sep.13, 9.10PM) It was just yesterday (12) Mahinda Rajapakse announced while he was in India that if he cannot contest at the next presidential election , it will be one of his brothers who will be the presidential candidate. However based on a Supreme court decision delivered in 1999 in the U.S . neither Basil nor Gota , both of whom are dual citizens can be a presidential candidate in Sri Lanka(SL) .

Under the new laws in SL ,because a dual citizen cannot contest a parliamentary election , he/she cannot be a presidential candidate. Hence , if Basil or Gota is to contest the presidential election they must divest themselves of the dual citizenship . According to the 1999 US court verdict both of them definitely cannot surmount this disqualification attaching to them .

As in SL (parliamentary elections) so in that country a dual citizen cannot contest the mayoral elections . Hence Alberto forwarded an affidavit to the American Consulate in Puerto Rico requesting to rescind his American citizenship.

As a rule , it is the US state secretariat which makes the final decision on such matters. Alberto’s application to cancel his US citizenship was declined by the secretariat.

Alberto being a lawyer filed an application in the US supreme court against that decision requesting a writ to be issued to the state secretariat to rescind his citizenship. The case number of ‘ US State department vs Lozada Colon ‘ was 99-259.

The US supreme court which heard Lozada’s case against the US state department dismissed Lozada’s petition confirming that the decision of the US state secretary is in order. The U.S. SC adducing reasons in support of its decision explained, the request made to withdraw US citizenship should be spontaneous and not based on any extraneous inducement. The request made citing the ground that Lozada wanted to contest elections is not a request which is spontaneous , the court highlighted .

Consequently Lozada ‘s dream to become mayor came a cropper. The relevant case proceeding can be read by clicking on the link below …

In the circumstances neither Basil nor Gota can expect or get a verdict different from that of Alberto from the U.S. SC. As in SL so in the US laws are not flexed or twisted to suit individual needs.

Basil of course has said in no uncertain terms he will not withdraw his US citizenship. Whereas , Gota who is evasive and elusive always does not give a direct answer when questioned whether he will cancel his US citizenship. His answer is not in words but in hiccoughs because he knows deep within he has no way out – he cannot succeed in that direction. Since it is impossible to dupe the US courts , it is Gota ‘s hope that he will get an opportunity to tinker with the laws of his motherland , and he can somehow secure nominations as a presidential candidate.

We are revealing the stark facts with evidence pertaining to Gota’s vain attempts to be a presidential candidate in order to clear the clouds in the minds of the brutes and brats of brutal Gota who are still optimistic Gota can be president who crowed yankee doodle do for over a decade in the sleazy corners of the States without even thinking of his motherland until the war was over . It is best they look for another candidate from now on.