If I am ineligible it will be a brother of mine who will be presidential candidate -Mahinda says in India..! 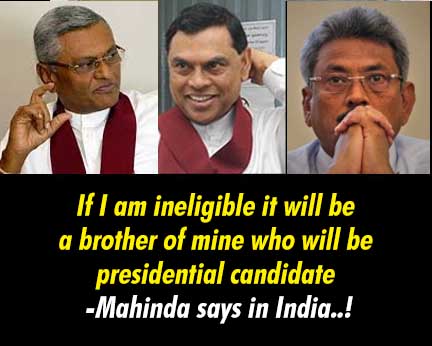 (Lanka e News - 13.Sep.2018, 9.20PM) At the presidential elections in 2019, he will be the leader of the Sri Lanka Podujana Peramuna (SLPP)  , but even if he cannot contest as a candidate certainly one of his brothers will be the presidential candidate , Mahinda Rajapakse M.P. Kurunegala categorically told in India.

Mahinda who  is on a tour of India currently made this announcement  when he was  interviewed by ‘The Hindu’ weekend newspaper. Mahinda who is now a patron of the SLFP had mentioned, the  ‘Bud’party as the party to which he belongs , and he has implicit faith in it . Besides  he who will be leading the SLPP in 2019 , he confirmed.

When commenting on the decision taken by India to release the assassins of Rajiv Gandhi , he said that is a matter relating to the  internal affairs  of India .

Based on the announcement made by Mahinda that a brother of his will be the presidential candidate at the next elections , it is only Chamal Rajapakse who has the eligibility requirement. Basil and Gota are dual citizens having American citizenship as well. According to the SL constitution , the prospective presidential candidate shall be qualified to be a parliamentarian.  Under the new laws of the country , a dual citizen cannot be a parliamentarian.

No matter what , to Maithripala Sirisena  , Mahinda’s revelations must have been like getting thrashed by Mahinda  with the  Sting Ray tail ,because this has dashed to the ground Sirisena’s hopes of becoming president again by  keeping unholy  company  with the Rajapakses .