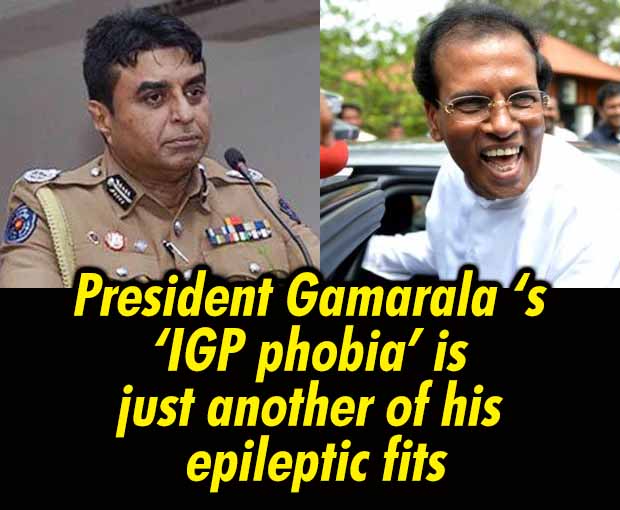 (Lanka e News - 08.Oct.2018, 6.00AM) ‘IGP Poojtha Jayasundara is a joker and because of his conduct he had to face grave embarrassment ,’ said president Pallewatte Gamarala after his return to SrI Lanka .The president who returned after his New York junket had told at the cabinet meeting that he should take a stern decision against the IGP, according to media reports.

It is worthy of note , on the contrary it is not the IGP but rather it is the president who had become a confirmed joker before the entire country following his empty braggadocios and profusion of lies he uttered in New York pertaining to the final two weeks of the ethnic war . It reflects most poorly on the country when the president who is the highest in the hierarchy of the country becomes a clown locally and internationally , the IGP’s clowning notwithstanding.

It is the general consensus that the IGP had not acted as a clown except during the Kandy Perahera when he acted clownishly. Hence it is a doubt whether the president is angry with Poojitha not so much over his clowning but because the latter thereby has become clown Gamarala’s closest and threatening rival in the arena of clowning .

Leaving aside the din created by the media , it is important to dissect the politics behind the clownish conduct (koloma) of the president and his sudden change of attitude towards the clownish behavior of the IGP.

Earlier , the IGP was appointed by the Executive president, and Gamarala was expected to abolish the executive presidency within 100 days of his becoming the president in accordance with his loud promises. But since he did not fulfill the promise the 19 th amendment had to be passed after prodding and pushing president Gamarala like how a dog is taken to give a bath.

Under the prevailing laws , the IGP is not appointed by the executive president. Currently , it is the Constitutional Council which selects the IGP from the names forwarded by the president, and a representative of the president who is a parliamentarian is a member of that Constitutional Council .Thereafter the appointment letter is handed over by the president in the same way as did the Independent Police Commission . Based on the 19 th amendment , all decisions pertaining to disciplinary matters of the subordinate notified police officers below the rank of IGP are decided by the Police Commission. The Police commission however cannot take decisions in regard to disciplinary matters concerning the IGP .

According to the 19 th amendment not only the president even the Constitutional Council which selects the IGP cannot take decisions pertaining to the disciplinary issues of the IGP nor can they remove the IGP from the post. If the IGP is to be ousted an impeachment motion shall be tabled in parliament and that has to be passed with a simple majority. It is only then he can be dismissed. The IGP has a right however in the meanwhile to seek redress from Supreme Court questioning the propriety of the impeachment motion. In other words the grounds cited in the impeachment motion should be proved in court. All these are a clear index , in the present context , the IGP cannot be dismissed just because some offspring of a two legged dog or bitch desired it. The good governance introduced this system in order to enable the IGP to take independent decisions , without which the Police cannot de- politicized.

There had been fruitful results from that …

The IGP should be saluted and lauded for refusing to dance to the tune of president Gamarala in latter’s efforts to save the officers of the forces who are facing heinous murder charges. Moreover, neither DIG Ravi Seneviratne in charge of the CID nor DIG Ravi Waidyalankara the chief of the FCID can say that the IGP gave orders to them to halt the investigations into the crimes committed during the nefarious corrupt decade even when the IGP was under intense pressure. .

A most uncorrupt IGP …

The present situation is , both the DIGs are hostile to the IGP. Those who analyze the actual scenario and understand the true background in this climate will therefore realize how uncorrupt the present IGP is.

In fact it was Lanka e News which first nicknamed the IGP Poojitha Jayasundara as ‘IGP koloma’ ( IGP clown) before others. That is because of his innate personal mannerisms. Yet , no one can say that during Poojitha’s era , he descended to the level of former IGP Anandaraja who openly attended the birthday celebrations of heroin dealers. Neither can anyone accuse him of having built mansions like ex IGP Mahinda Balasuriya who built a ‘palace ‘ out of Kudu Duminda’s monies. None can even say , he operated a police mafia like ex IGP Chandra Fernando who took a suspect in custody out to show the hidden weapons and killed him brutally. All the ex IGPs have been involved in shooting down their enemies, breaking their heads and murdering them . But Poojitha had never committed such brutalities. The only accusations against him are : threatening a lift operator holding him by the collar of his shirt; dancing during the Dalada perahera; and delivering lectures which are painfully long.

The president of the dual consensual government gives one instruction, the Prime Minister issues another , the wilted Police Commission takes a different stance, while the people are also intently watching the Police actions . Yet Poojitha is the first IGP who conducted himself independently and discharged his duties duly in spite of such contradictory instructions without kowtowing to the political pressures mounted on him despite his ‘koloma’ nickname. That itself is a world record.

Why is president Gamarala hell bent on getting rid of such an IGP?

The true reasons are different from what meet the eyes and ears .

Though it is true Poojitha danced during the Kandy Dalada Perahera , he however refused to dance to the obnoxious tunes of president Gamarala. Hereunder are some examples …

One : Poojitha did not abide by the illegal instructions given by the president to halt the investigations into the murderers in the Navy and the Navy high ups who aided and abetted in those crimes.

Two: Pallewatte Gamarala cashing in on the rivalries which are natural among the DIGs , sought to create a fake assassination conspiracy drama . Yet the IGP’s assistance could not be enlisted by the president in that diabolic attempt .

It was Sirisena who helped him to join the police force through Mrs. Sirimavo. Wickremesinghe who was groomed and propelled by the SLFP then became the security officer of the PSD of Mahinda Rajapakse .

Now the need for the second father is to make his son Wickremesinghe the IGP and thereafter rig the future elections . This is very evident based on the support that was provided to Sirisena by Wickremesinghe the DIG in charge of that district during the recent communal riots in Kandy to fan the flames of violence. But for the DIG of the STF who went from Colombo , both Wickremesinghe and Sirisena would have got together and caused a communal blood bath. The masses will now understand why Pallewatte Gamarala is determined to push out Poojitha Jayasundara from the IGP post .

IGP is not the first citizen of the country ,therefore when the almighty first citizen, a confirmed biggest villainous demon who behaves much worse than the IGP calls the IGP a ‘joker’, there is no bigger joke than that. It is obvious , an IGP clown cannot do greater damage to the country than an IGP demon . Hence the IGP phobia of demonic president Gamarala is another of his epileptic fits.