When cat is away ‘Gamey’ rat is at play ! Why UNP govt. still procrastinating despite Gamarala’s conspiracies and treasons ? 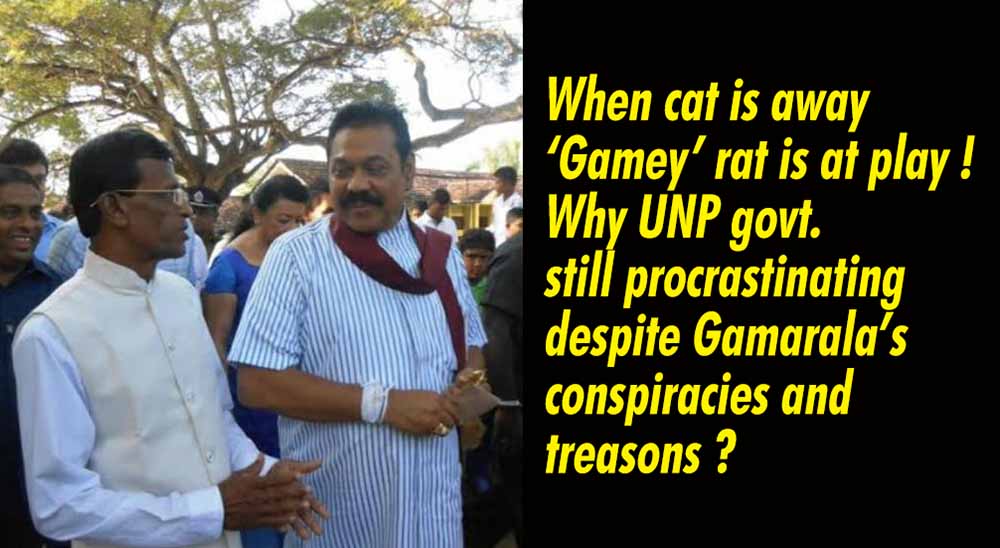 (Lanka e News - 10.Oct.2018, 8.10PM) It is now confirmed that president Pallewatte Gamaralalage Maithripala Yapa Sirisena the leader of the cabinet of ministers and the state leader had conspired to scuttle the government with a view to bring it to its knees while the prime minister (P.M.) is not in the country.

This is following the media revelations that the rudderless policy less president has hatched a conspiracy to bring down his own government , and since the president has still not issued an official communiqué contradicting that report. This conspiracy is plotted jointly with Machiavellian mendacious faceless Percy Mahinda Rajapakse M.P.who is not the opposition leader but the leader of the unofficial parliamentary group calling itself as the Alliance which sabotages the government at every possible turn .

The president who is the leader of the cabinet has hatched this conspiracy without the knowledge of the cabinet at the residence of S.B. Dissanayake M.P. while the P.M. was abroad , which details had already been exposed by the media. Notorious S. .B.Dissanayake is one who lost his ministerial portfolio when he engaged in double games and backdoor politics supporting an impeachment motion against the P.M. some time ago.

According to media reports , the president at the discussions had conspired with the aforementioned unofficial group to form a new government citing the ‘economic morass’ the country is facing as an excuse.

Sadly , President Pallewatte Gamarala however had not held such overt discussions . He had neither discussed the economic morass at the cabinet meeting nor has he inquired about what is the solution available for it. He has not even discussed with the official opposition.

In the circumstances, the discussion the president had with Percy Mahendra Rajapakse at Dissanayake’s residence is absolutely anti government as well as traitorous . That is the only inference that can be drawn , and is the only interpretation that can be given to his underhand move.

Obviously this dastardly action of the president is a most dangerous and diabolic conspiracy not only against the state but also against the people’s mandate which was responsible to enthrone him as the president. It is significant to note he was made president defeating the very same Percy Mahendra Rajapakse whom he is now trailing behind and was discarded by the masses. It is therefore a stark unassailable truth that president has no mandate to form a government with rejected Mahinda Rajapakse who was thrown out lock ,stock and barrel.

Therefore he is a president who turned his back on the mandate of the people not just now. He became an infamous cut throat and betrayer on that account as far back as over three years ago – within 48 hours of his taking oaths as the president despite his so many solemn promises that he would not renege on his promises.

Prior to 2015-01-08 throughout the run up to the elections his promise orally and in writing was he would be non partisan and act sans party affiliations after becoming president . Yet even before 48 hours had elapsed , he took over the leadership of the SLFP which he strived hard to defeat at the elections , without anybody’s knowledge .After that historic betrayal , since that point of time he became a byword for countless betrayals and double deals .

This is also the ignominious shameless president who gobbled hoppers with Rajapakses the night before his crossing over and betrayed them . . After that betrayal even before 48 hours had elapsed following his presidential appointment he made another historic betrayal – he took over the leadership of the SLFP grossly betraying all the people’ s forces and the voters that installed him in power. What’s more ! he had secret discussions with murderous , criminal and corrupt Gotabaya Rajapakse in the nights after extinguishing the lights , and now Gamarala has created an environment that militates against the enforcement of the law even today against brutal corrupt Gota .

It is a common saying , ‘man is a wolf to man’. Though this is a saying which perfectly describes Gamarala, let this two legged ‘wolf’ be enlightened on the fact that this saying is truly a libel on the wolf for wolves are very much kind to each other unlike humans of Gamarala’s breed and birth.

Gamarala who bites the hand that feeds is still hurling criticisms against the civil organizations and the NGO’s that propelled him to power .He has even proscribed Lanka e News which single handedly made a huge contribution to make him the president . Now he has made it a habit to level accusations against the UNP leader who shielded , safeguarded , dispelled all his fears and provided all the encouragement to address the final presidential elections rally when Gamarala was in mortal fear for his life. It is against that same UNP leader , this ungrateful unscrupulous Gamarala brought a no confidence motion recently to chase him out. His latest in the series of villainies and betrayals is the accusation made by him against the UNP leader of conspiring to assassinate him , using an employee, a most unscrupulous informant receiving salary under Gamarala .

It is a matter for deep regret , president Gamarala had now hatched the traitorous conspiracy in Dissanayake’s house at a time when the P.M. is out of the country , and in the grim backdrop of this series of cruel betrayals, back street politics and throat slitting.

This betrayal of the president is high treason against the state and cannot be treated lightly .Even if all the groups he is trying to muster are taken together the total number of MPs is 96. Based on the mandate received by the UNF at the last elections, it has 106 MPs. Hence , if president Gamarala is hoping to form a new government in this scenario , that cannot be democratically accomplished. It can only be with the backing of his presidential powers coupled with his villainy and conspiracy he is hatching .

There is no doubt it is an opposition president who is at the helm currently. This must be clearly understood by the UNF government though it is the latter which made him the president. The chiefs in the government must make up their minds to annihilate traitors. It is the duty of responsible and truthful media personnel like us to ensure against the nation being sacrificed merely to satiate the power greed of any son or daughter of any bitch or bas…..rd .