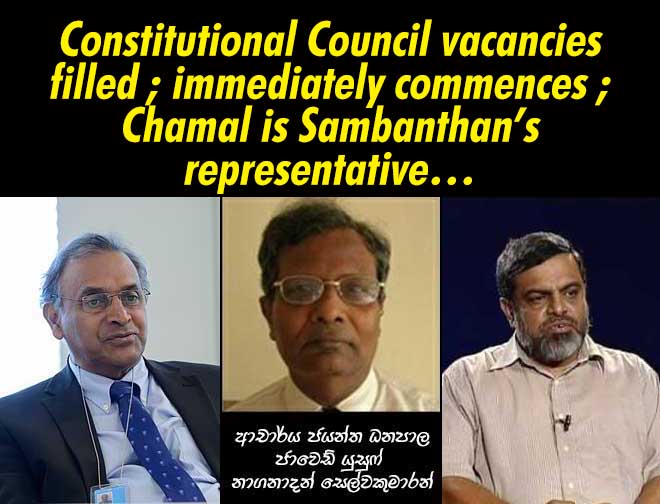 (Lanka e News -13.Oct.2018, 6.45 AM) The Parliament gave the approval on the 11 th to fill the vacancies in the Constitutional Council , and the names of those members to be appointed were  : Dr.Jayantha Dhanapala, Javed Yooosuf (lawyer) and Naganathan Selvakumaran (lecturer) .

The ten members of the constitutional council have now been appointed. The prime minister , speaker and opposition leader are officially appointed as members of the Council .

The second Constitutional Council appointed under good governance government was scheduled  to commence sittings on the 12  th ,as Priyasad Dep Chief justice  is due to retire on the 13  th ,  another member must be appointed in his place.

The most senior of the judges after Dep is Eva Wanasundara.  However she can old the CJ post only for a short period of three months (retirement age) , and owing to her partiality she is unlikely to be appointed. Based on unofficial reports, the next in line is Nalin Perera and it is his name that is proposed.