Open letter to presidential secretariat ! Investigate the dozens of corruption and frauds 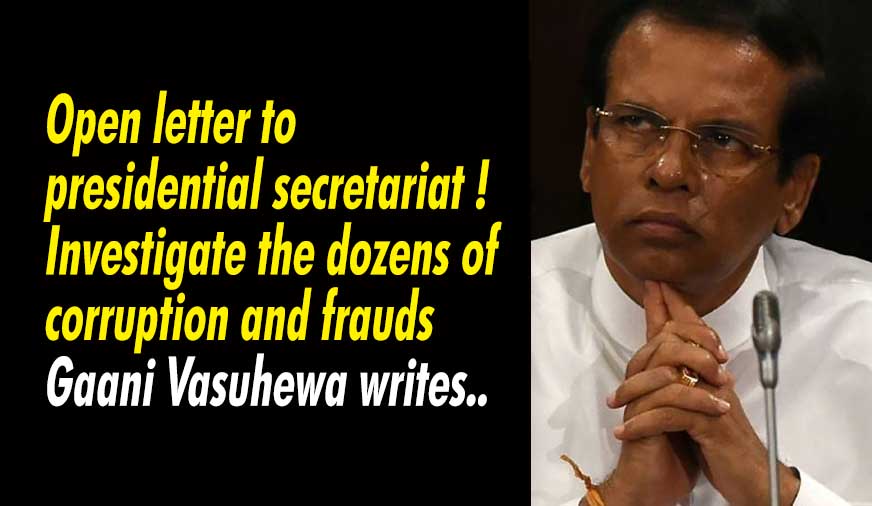 (Lanka e News -26.Oct.2018, 11.30PM) The president while inaugurating a program against frauds ,profligacy and corruption made a request to the public to expose those crimes. In compliance with his own request Lanka e news deems it is its duty to give hereunder information about the frauds , profligacy and corruption that were committed during his own term as president under his very nose which warrant immediate investigation, and punishment. .

1.The Electronic transmission , a public property valued at many millions of rupees was given to Sirasa Institution for a song without duly calling for tenders. In the final round , when tenders were called to grant this electronic transmission on lease, the Malaysian Co. was paid US dollars 25 million whereas, Sirasa received a paltry US dollars 10 million only. That is, the country had been deprived of a whopping sum of Rs.4340 million . This is a massive crime of corruption. This abuse of power is itself a grave crime . Besides under article 38 , (2) a ( iv) of the constitution , the president is liable to misconduct and , has laid bare to an impeachment motion against him.

2.Purchase of a ship from Russia which in fact is just discarded metal, by KIli Maharaja in collusion with president’s notorious wheeler dealer son in law for US dollars 158 million. It was only after the Finance ministry pointed out when this deal was to be concluded forcibly, that economic sanctions will be imposed on the country because the Russian Co. is blacklisted ,that deal was stalled .This deal had not been concluded so far , and it is learnt every sly move is being made to put this through with the blacklisted Russian Co..

3.Presidant Sirisena made solemn promises that he will stamp out the family rule ,but as soon as he became president , his younger brother Kumarasinghe Sirisena was made the chairman of Telecom and Mobitel , two most important Institutions in the country. . Besides Kumarasinghe is an absolute ignoramus on the subject of telecommunication . Little wonder the Institutions are now in serious trouble.

4.The assets of Chaturika Sirisena , Thilina Suranjith and Daham Sirisena as at 2015-01-08 shall be laid bare. It must be revealed to the people how the assets snowballed to such monumental scale during the following 3 years.

5.Conducting himself in a manner to shield and safeguard murderers after reckoning them as war heroes when there is cogent evidence to prove the crimes .

Instead of interdicting the suspects in the Ekneliyagoda disappearance , reinstating them in service.

While the prime suspect in the multiple murder of 11 children after collecting extortion monies was in remand custody , granting an extension in service to him. These are grave abuse of powers and most heinous crimes.

6.When a most reputed Director General of Bribery Commission Ms. Dilrukshi Dias was discharging her duties most honestly and with integrity , and apprehending all the rogues irrespective of their rank and status , by openly leveling unfair charges against her created a situation which led her to resign that post. This was a violation of article 42 of the constitution by the president . He has deliberately obstructed the Bribery Commissioner in the execution of her duties duly and law enforcement.

7.Wife of Udaya Gammanpila unlawfully drove a state vehicle and killed a youth . This murder was suppressed .

8.In the Thajudeen murder and the Sirilasa fraud where Shiranthee Rajapakse is facing heinous charges , permitting to record her statement by the CID at speaker’s residence ( public property) .In addition giving illegal orders to the Attorney General to delay the filing of cases against her in the massive Sirilasa fraud.

9.Without taking necessary legal action against Mohan Peiris when he was the chief justice who exerted undue unlawful pressures on the president ( if he is allowed to continue as CJ , he will give decisions in the way the president wants) , president just made wild utterances in that regard. After Peiris resigned , legal action could have been taken against him for the pressures he exerted, yet that was not done.

10.Mangala Samaraweera in writing made a complaint against the conspiracy of the former rulers and their diabolic attempts on the night of 2015-01-08, yet that was suppressed.

11.On 2015-01-08 following victory , what were you secretly discussing and conspiring with those charged with murder and corruption charges that night after extinguishing the lights ( main witness to this is Malith Jayaweera M.P.) It is your incumbent duty to disclose what you discussed , to the people who elected you to power. .

12.When ex CJ Sarath Silva did not deliver a correct judgment against the then prime minister charged with misappropriation of Tsunami funds , and even after he told openly that he gave a wrong verdict and asked for pardon , preventing that case from being tried before a higher panel of judges.

13.Taking decisions regarding Glyphosate , asbestos , security helmets in a way that could harm the people. After saying those are bad and banning them , then again lifted the ban to deliberately drive the people into serious problems.

14.While FCID was conducting investigations into the corruption crimes of infamous ex ministers Dilan Perera and Susil Premachandra , the investigation was halted , and the files were called back by you ( telephone call exchanges bear testimony )

15.Encouraging and authorizing rape by appointing criminals as electoral organizers who were punished by courts for making a school teacher to kneel down. Even before his suspended sentence was over the criminal was appointed.

16.Encouraging and authorizing corruption by protecting and safeguarding the over obese chief minister who made a principal of a school to kneel down.

17.Culprit Sajin Vaas who never gave evidence and doesn’t appear is being named a crown witness , and kept in hiding .

18.After coming to power assuring that family rule will be stamped out , through own children exerting pressures unlawfully on State Institutions.

20.After railing at the Lamborghini of Namal , importing a super luxury vehicle costing Rs. 35 to 40 million out of public funds as soon as becoming the president .

21.Creeping to power after ‘selling’ the media personnel victims who were murdered and disappeared in so many ways , as well as the media institutions that were destroyed , by promising to address their issues and providing redress. But until now nothing had been done on their behalf.

22 .Swearing with all the might before Dalada Maligawa that the executive presidency will be abolished , saying this is your first and last term in office . But now kicking out all those solemn pledges and seeking court intervention to increase the presidential term in order to cling on to power . Having tasted the Infinite sweetness of corruption through corrupt power , how can you adhere to your promises and pledges even before deities?

23.Recommending two judges who have acquired a notoriety for corruption to the Constitutional Council to be appointed as judges of the higher courts

24.While being the official head of a government with a majority , conspiring with the confirmed discarded plunderers and rogues in a minority on the sly to form a government .

If the presidential secretariat is truly against corruption and frauds that have been committed in many dozens ,it should take stern measures against these, and irrespective of rank and status of the culprits mete out punishment with a view to put the country on the right road .