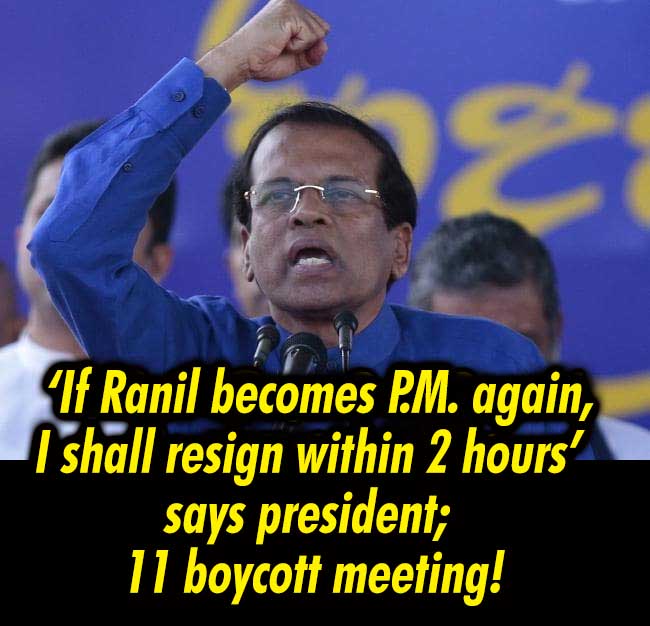 The president made this revelation before the forlorn people discarded president’s group at a luncheon today at the presidential palace , while adding there is a conspiracy of the European union including the US to make Ranil the P.M. , and if that happens he will not be in the presidential post for even two more hours, he assured.

A UPFA Spokesman speaking to Lanka e news said , it is apparent the president has become frightened after seeing the mammoth people’s protest at Kollupitiya on the 30 th to defeat the MARA- SIRA junta , and safeguard Democracy.

During the discussion, the president also said , he made Mahinda Rajapakse P.M because Ranil conspired to kill him which story was endorsed by Dayasiri Jayasekera. The Dedigama organizer who stood up questioned is it right for the individual who says he is be murdered to go the one who is to commit it, while querying is this the dirty politics they want us also to engage in ? Following the Dedigama organizer’s statement , and some others speaking for him, the meeting was concluded by President and Dayasiri .

No Matter what conspiracy and underhand tactics the president is resorting to muster support through all this ballyhoo, 11 M.P.s including the ex general secretary Duminda Dissanayake boycotted the meeting.

It is clear now, this group when it began to muster the support of 113 they had with them 96 which has now dropped to 85. This means they need 28 M.P.s more even by paying Rs. one billion each ! So far they have bought over 5 M.P.s only. They are Wijedasa Rajapakse, Ananda Aluthgamage ,Vasantha Senanayake, Suresh Vadivel and Dunesh Gankande.

Meanwhile Mahinda Rajapakse announced , if the 113 members cannot be mustered , he would resign his P.M. post