“ Make no mistake, Mr. President. If you try to stand in the way of justice for my father and other victims of brutality, you will fail.” -Lasantha’s daughter writes to President 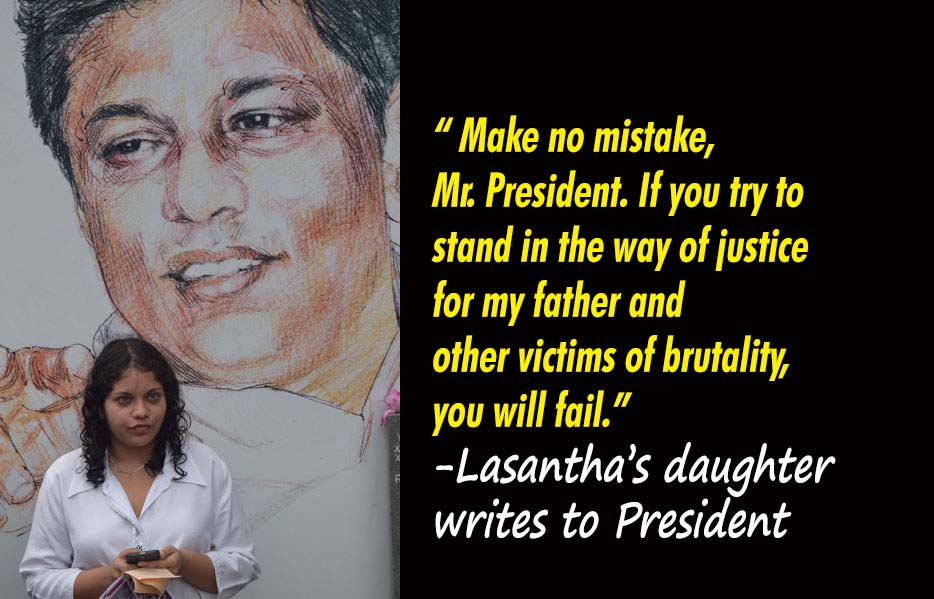 (Lanka e News -20.Nov.2018, 11.00PM)  “ Make no mistake, Mr. President. If you try to stand in the way of justice for my father and other victims of brutality, you will fail.”  Ahimsa Wickrematunge, the daughter of Lasantha Wickrematunge, writes a letter to President Srirsena and condemned the move to transfer CID OIC Nishantha Silva who was handling investigations into the murder of Wickeematunga.

Sunday 18th November 2018 was the 73rd birthday of former President Mahinda Rajapaksa. To mark this occasion, President Rajapaksa participated in a ‘Pinkama’ at a temple near his official residence, attended by your Inspector General of Police, Mr. Pujith Jayasundara. After celebrating the former President’s birthday in the company of former Defence Secretary Gotabaya Rajapaksa, Mr. Jayasundera proceeded to police headquarters, where he signed transfer order D/HRM/ADM/1869/2018 dated 18th November 2018.

As you are fully aware, this was an order to remove Police Inspector Adrian Nishantha Silva, Officer-in-Charge of the Gang Robbery Branch (GRB) of the Criminal Investigation Department (CID) due to unspecified “service requirements”. While the order is ostensibly from the IGP, he has made no secret of the fact that he issued this order hesitantly, at your insistence. This was a thoughtful birthday gift on your part, but it was Mahinda’s birthday, not Gotabaya’s.

I know Inspector Silva as the lead investigator into the murder of my father, Lasantha Wickrematunge, who was bludgeoned to death on 8th January 2009, exactly six years before you were historically elected President on a platform pledging to solve heinous murders like my father’s.

In January 2009, two innocent youth were abducted in Vavuniya and executed in cold blood and their corpses burnt to ashes in Anuradhapura, all just so that their motorcycle could be planted as evidence at the crime scene. Senior police officers helped to destroy all traces of the notebook containing my father’s last words, which may have identified his attackers. We know this because of Nishantha Silva. Over the last two years, he travelled tirelessly around Vavuniya and Anuradhapura, interrogated dozens of witnesses, ordered DNA tests on decade-old samples and finally arrested the police officers responsible, including a Senior Deputy Inspector General.

On 18th January 2010 the CID made a breakthrough into my father’s murder when a mechanic in Nuwara Eliya identified a soldier in the Tripoli Military Intelligence platoon as having used his National ID card to purchase SIM cards used to coordinate the attack on my father. The ink was barely dry on that witness statement before the all-powerful Gotabaya Rajapaksa personally ordered that the commanding officer of the Tripoli platoon be whisked away to a diplomatic posting. The investigation was then yanked away from the CID overnight and given to the Terrorist Investigation Division (TID), who arrested the poor mechanic on trumped up charges and covered up all involvement of the Tripoli platoon. We know all this purely thanks to Nishantha Silva’s investigations. We would know more if the poor mechanic did not mysteriously perish in remand custody in October 2011.

I came to know Nishantha Silva when he visited Melbourne to record a statement from me regarding my father’s murder. I told him then that my father had said repeatedly that he was likely to be killed by Gotabaya Rajapaksa for having exposed the MiG Deal. Nishantha Silva fearlessly reported this to the Mount Lavinia courts. Only a court of law can decide whether my father was right about who gave the order to kill him, but he was sure right about the MiG Deal. The FCID investigation has shown that half the money paid by the Sri Lanka Air Force was siphoned off to a shell company operated by middle men, and that Gotabaya Rajapaksa’s cousin Udayanga Weeratunga was in the thick of the deal, all exactly as my father had exposed.

Ever since I got to meet Nishantha Silva, I was struck by his gentleness, humility and dedication to his job. I started following his work and was stunned by the number of high- profile cases that Nishantha Silva is handling. He is also the lead investigator into the brutal May 2008 abduction and torture of journalist Keith Noyahr. Nishantha Silva’s team reconstructed and scoured millions of telephone records, recorded over one hundred witness statements, located the military intelligence safe house in which Keith Noyahr was tortured, recovered documents proving the safe house was leased by military intelligence, and arrested eight military intelligence officers including the former army chief of staff. Seven of these suspects were from the infamous “Tripoli” white-van platoon implicated in the murder of my father.

Heck, he even found the infamous “white van” and brought it before court. This engine of death was a symbol of your election campaign, emblematic of the vicious brutality of your opponents. One would have expected you promote the man who found it and not try and sabotage his career. In fact, Inspector Silva may have been able to figure out the nexus between the Tripoli platoon and the chain of command if you had not personally ordered the military not to cooperate with the investigation on so-called “national security” grounds when the CID and the court requested essential documents and records of the army and defence ministry.

It was also Inspector Nishantha Silva’s team who identified and arrested members of yet another military intelligence killer squad for abducting and murdering cartoonist Prageeth Eknaligoda on the eve of the January 2010 presidential election. Again, Nishantha’s team scoured hundreds of thousands of telephone call records, searched several military installations, and recorded tomes worth of witness statements. According to court documents, at least two cooperating suspects-turned-witnesses have told the CID that the abduction and murder of Eknaligoda was carried out on the instructions of then Defence Secretary Gotabaya Rajapaksa.

During the investigation into the floating armoury operated by Avant Garde Maritime Services, it was Nishantha Silva’s team who in early 2015 first moved to impose a ban on foreign travel by Gotabaya Rajapaksa. His team did a tremendous amount of work on this investigation, breathing bank statements and inventorying weapons and explosives that had been stashed at sea in Sri Lankan waters on Gotabaya Rajapaksa’s authority. This investigation came to naught when your attorney general ruled in June 2015 that “no offences under the Firearms Ordinance, Explosives Ordinance or the Prevention of Terrorism Act are disclosed” by the operation of a floating armoury jam-packed with illegally licensed and unlicensed automatic weapons and explosives.

Nishantha Silva has also beenthe lead investigator into the brutal abduction and murder of eleven young men in 2008 and 2009 after their desperate families had been extorted for ransom, allegedly by several senior naval officers whom Inspector Silva has meticulously identified and arrested. It was Inspector Silva who had the unprecedented courage to share with an open court evidence that your former navy commander, now Chief of Defence Staff, was instrumental in harbouring and smuggling out of the country a fugitive navy officer involved in these grisly murders.

Ironically, it is this same Chief of Defence Staff, a suspect wanted for arrest by Inspector Silva, who seems to have provided you with unfounded and uncorroborated “intelligence” that Nishantha Silva was an “LTTE mole” – intelligence that you forced down the throat of your IGP to try and tarnish the name of one of the bravest, most dedicated and accomplished detectives in the Sri Lanka Police.

I sympathise especially with Nishantha Silva on this point. Throughout my childhood, I noticed that whenever my father exposed someone, and that truth was so pungent and irrefutable that it shattered their reputations, these people would react by accusing my father – with zero evidence – of being an “LTTE mole”. My father’s reporting on the MiG Deal, for example, led to a consorted campaign by the Ministry of Defence to brand him and his newspaper as organs of the LTTE. But the truth came out. The truth always comes out.

The truth about Nishantha Silva is that he has been one of the single biggest thorns in the side of the LTTE in the history of the CID. As a junior officer he was part of the team that investigated and dismantled the LTTE intelligence networks that supplied and facilitated the attack on the Katunayake airport in 2000. He was a lead investigator into the 2006 assassination attempts on both Gotabaya Rajapaksa and Sarath Fonseka. He splintered the LTTE networks involved in these and the 2008 assassination of General Janaka Perera, and he participated in countless additional counter-terrorism operations.

By desperately trying to brand a faithful public servant and national hero like Nishantha Silva as a terrorist just to please your strutting tin soldiers and to earn brownie points with your new-found political allies, you are degrading the office of the presidency to a degree that none of your predecessors ever have. My father at various times had fierce disagreements with both Presidents Chandrika Kumaratunga and Mahinda Rajapaksa. They called each other many things they would want to take back. But neither Presidents Kumaratunga nor Rajapaksa ever stooped so low as to try and brand my father as part of the LTTE. That is the refrain of lesser mortals, such as Gotabaya Rajapaksa, and apparently, yourself.

I urge you to remember that you have sworn an oath to uphold and defend the Constitution of Sri Lanka, not to uphold and defend your Chief of Defence Staff and those who rule by white van death. I do not know if these people are guilty of any crime. Neither do you. That is for a court to decide after a thorough criminal investigation of the kind that Nishantha Silva was so ably and tirelessly performing before you cut him off at the knees. Our role in the criminal justice system is to support investigators however they may require.

For me, as a witness, that means answering their questions truthfully and comprehensively. For you, as a head of state, that means putting the law before your personal relationships, political needs and whims. It means making available to investigators the resources, political will and support from the state they require to get to the truth and present it before a competent court. Above all, your role is to make it clear to police officers across the country that working with dedication towards the pursuit of justice like Nishantha Silva has done will bring reverence and not retaliation.

I have faith in the Criminal Investigation Department and the independent institutions of Sri Lanka such as the National Police Commission and Constitutional Council. They will not allow you to get away with such a blatant abuse of power.

Mr. President, you have only two choices before you. You could be remembered as the President who quickly rectified an ill-advised lapse in judgment by immediately reversing the removal of Nishantha Silva from the CID and letting him do his job.

Alternatively, you could wait until the independent National Police Commission or a court of law reviews your order and shoots it down. In that case you will be remembered as the President who tried to stop some of the most high-profile criminal investigations in the country – and failed. Make no mistake, Mr. President. If you try to stand in the way of justice for my father and other victims of brutality, you will fail.