Why the President should resign..? - Lal Wijenayake 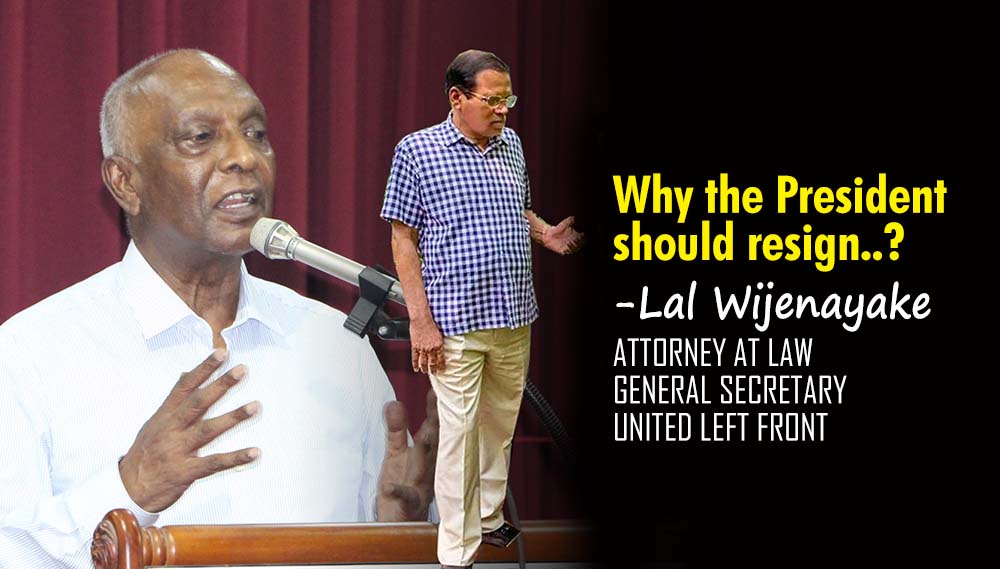 (Lanka-e-News - 01.Jan.2018, 11.30PM) Though the constitutional crisis that arose from the conspiracy hatched between the President and Mahinda Rajapakse which brought the country to the brink of civil war has ended due to the Supreme Court interpreting the provisions of the constitution on the dissolution of Parliament, the political crisis that emerged out of it has not receded. The Supreme Court has held that the President cannot dissolve Parliament within the first four and a half years of the life of Parliament unless Parliament by a resolution passed with 2/3 majority request that Parliament be dissolved.

Under Article 46(2), the Prime Minister shall continue to hold office throughout the period during which the Cabinet of Ministers continues to function under the constitution.

The other circumstances where the Prime Minister will cease to hold office will be under Article 48(2) where Parliament rejects the Statement of Government Policy or the Appropriation Bill or passes a vote of no confidence in the Government.

The next step in the process, the prorogation of Parliament is a violation of the spirit of the Constitution. The President is vested with the power to prorogue Parliament under Article 33(2)(c). This Article confers the general power of prorogation. But the purpose for which this power is vested in the President is governed by conventions. The word “prorogation’ itself in a Parliamentary system carries with it what it means. Under the British Parliamentary conventions, which we follow, Parliament is prorogued either to give the members of Parliament a recess or to clear the order paper of Parliament when it is full of motions that has not been disposed of so that the House can commence the new sessions with a clean slate. The tradition even in our Parliament is for Parliament to be prorogued on the advice of the Prime Minister.

Therefore prorogation of Parliament admittedly was for an illegal purpose.

This again amounts to an intentional abuse of power in violation of the Constitution.

Thereafter, when the Mahinda Rajapakse government was short of the number necessary to function in Parliament the President dissolved Parliament, This is a blatant intentional violation of the constitution. This is confirmed by the judgment of the Supreme Court.

The President claims to be the leader of the UPFA. UPFA claims that they be recognized as the main party in the opposition and demands that Mahinda Rajapakse be appointed as the leader of the Opposition. On the other hand the President holds three ministries Defense, Environment, and Mahaweli Development as stipulated in the constitution and has also kept under him the Ministry of Law and Order and some Media Institutions. Therefore the President is the head of the main opposition party, holds Cabinet Ministries and chairs Cabinet meetings as President. There is clearly a conflict of interest. This is a blatant violation of the spirit of the Constitution.

Therefore the President has no moral right to continue to function as the President. His continuing to hold office is an obstruction to the smooth functioning of the Government.

Therefore the President should resign from the position as President and allow the country to be governed upholding the Constitution.